Color Photographs from the WPA

The photographs document the later period of FDR's New Deal, an ambitious series of government programs designed to address the brutal effects of the Great Depression on the social and economic fabric of 1930's America. 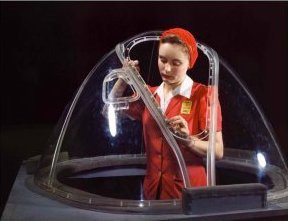 Largely forgotten until the mid-seventies when they resurfaced in the Library of Congress archives, the color photographs of the Works Project Administration (1939-1943) document the later period of FDR’s New Deal, an ambitious series of government programs designed to address the brutal effects of the Great Depression on the social and economic fabric of 1930’s America. While the Library’s archive of black and white depression-era photographs is more familiar and more often reproduced, the color images, taken within three years of the invention of Kodachrome film, are striking for their rich, saturated colors and rigorously formal compositions.

The images document industrial and agricultural labor, rural and small town life, as well as large-scale mobilization for the war effort in the early forties, and were intended as a kind of inspirational portrait of Americana in the face economic troubles and the growing wartime fears of “Hitler at our doorstep.” In response to accusations that the New Deal programs were too extreme in their reshaping of economic and social policy, Roy Stryker, who was behind both black and white and color photography projects, encouraged the photographers to provide supporting evidence for the necessity and purpose of government’s role in ensuring the public’s welfare after the near collapse of the country’s financial system. While occasional charges of “socialism” and “communism” were levied against the New Deal, the goal of the myriad government programs that comprised it was in fact to restore capitalism after the speculative excesses that led to the crash of 1929.

The emphasis on both technical and formal invention in these images underscores the promise of technology and order in the face of the social and economic instability of the period. Seemingly borrowing from the formal and compositional experimentation of social realist propaganda, the earnestness and belief encoded in these pictures is hard to miss, while at the same time their aesthetic sophistication belies a professionalism that suggests a great respect for their intended audience.

Because the role of the WPA pictures was to encourage support for solutions rather than reveal the tensions in the social fabric which made the need for reforms obvious, what is rarely in evidence in the WPA archive are images of social unrest that was endemic to the 1930’s. In an effort to offer a broader context for the WPA photographs, they will be exhibited with archival material that documents the major strikes and protests of the time, some of which were met with shows of force by the state. Revealing the pressure on the Roosevelt administration to respond to the desperate circumstances of large segments of the population who had lost faith in “the system,” this documentation finds many parallels in the spreading social instability that has come in the wake of more recent economic crises around the world.