Two solo shows. Santin constructs arresting compositions that simultaneously attract and unsettle in their evocative depictions of sublimated desire. He orchestrates elaborate still-lifes that originate from his own theatrically composed photographs. Oh's works are drawings in space from fragments of simple materials: string, a tiny brass knob, a chair leg. 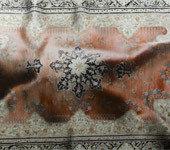 Santin constructs arresting compositions that simultaneously attract and unsettle in their evocative depictions of sublimated desire. He orchestrates elaborate still-lifes that originate from his own theatrically composed photographs. Visiting his models at their homes, Santin chooses outfits from their personal belongings and assembles each detail of the image. He then transforms each photographic record into a painterly construct in oil on canvas that vacillates between a mimetic three-dimensional space and a heightened reality augmented by surprising shifts in texture and gesture. Deeply rooted in the tradition of Spanish Tenebrism as well as his own training as a sculptor, Santin juxtaposes flattened planes with tangible forms carved by light and shadow to create a continuous perceptual dialogue in each work.

These series of recent related works incorporate the human form as a fetishized object to be hidden or revealed in images that often conjure a cinematic aesthetic. The rug series evolved from his interest in the opacity of fabric as a device to obscure the body with abstract patterns and textures. His newest series of crocheted landscapes of the female form are at once a technical accomplishment of texture and a formal repositioning of the body as a distinct yet abstract mass.

There is no easy description of Oh’s work and most can barely be photographed. They are so slight and even in person they require that we stop and pay close attention. And then the reward is so great. They are drawings in space from fragments of simple materials: string, a tiny brass knob, a chair leg. Yet everything here is of consequence.

Perhaps it helps to understand something of his origins. Jong was born in Mauritania at the fringes of the Sahara in a Black Arab culture which was very foreign to Koreans, and yet though he has no memories of the place he misses it in his bones. Then he moved to Grand Canaria, Spain and then Seoul and Pusan, Korea − now New York.

He is responsive to the fragility of existence and space and recognizes that even facts are fragile. As his work has matured it has required less and less as in the best poetry where concision results in the greatest weight of each syllable. In the end these art works have humility; they are inclusive and generous.