everyday 9am-6pm, except tue. Night opening until 9.45pm on wed and fri

The Virgin and Child with Saint Anne. This exhibition aims to present the state of existing knowledge about this now restored masterpiece by bringing together, for the first time since the artist's death, all of the related works and documents. 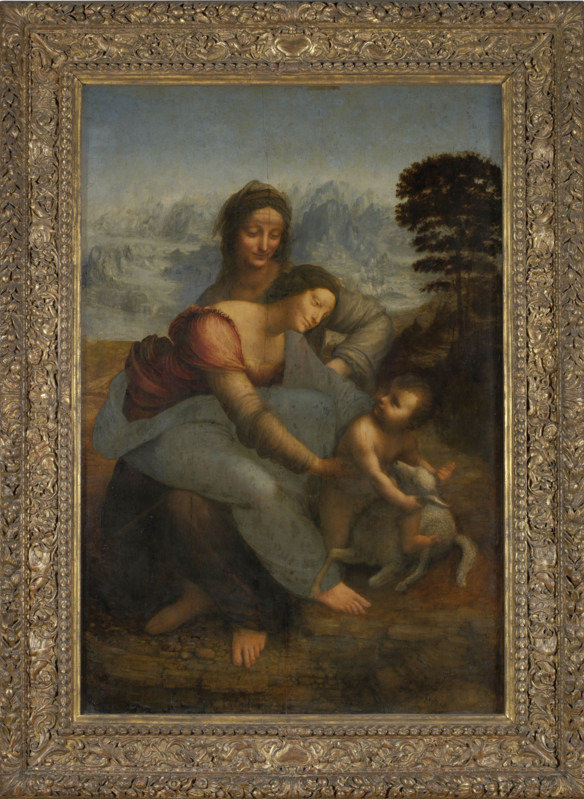 The Virgin and Child with Saint Anne is one of Leonardo da Vinci’s most ambitious compositions. Celebrated already by those having visited the Florentine master’s studio in the early stages of the painting’s conception, this work was the culmination of a long process occupying the artist during the last twenty years of his life. To this day, a number of questions remain unanswered, particularly as to the origin of the commission, how the painting evolved, and its early history. Recently, several historical and scientific discoveries have provided important clues, although without resolving all of the doubts surrounding this work.

This exhibition aims to present the state of existing knowledge about this now restored masterpiece by bringing together, for the first time since the artist’s death, all of the related works and documents. One hundred thirty-five works are thus presented, including two exceptional loans: the Burlington House cartoon from the National Gallery in London and a group of twenty-two drawings by the master lent from the Royal Collection by Her Majesty Queen Elizabeth II. These works allow visitors to explore the intellectual and artistic journey leading Leonardo to this particular lasting legacy, which has had considerable influence on the development of the arts, from the early sixteenth to the twentieth century.

The exhibition retraces the slow, deliberate and complex genesis of Leonardo’s Saint Anne, left unfinished at the artist’s death in 1519, by bringing together for the first time archival documents, composition sketches, preparatory studies, landscape studies and studio versions showing the various formal and iconographic solutions successively imagined by the master. The presentation of other painted works by Leonardo from the same period helps to establish the Saint Anne as the genuine consummation of the artist’s lifelong investigations, his numerous and wide-ranging studies on the nature of art.

In order to fully characterize the ways in which this work marked a new departure in the history of art, the exhibition aims to situate the work within the iconographic tradition relating to its subject (the “Saint Anne trinity”) and focuses on the immediate impact of the work on Italian art. In addition, more recent works inspired by Leonardo’s interpretation of this subject, by artists such as Delacroix, Degas and Max Ernst, bear witness to the lasting influence of this masterpiece.

The project to restore Leonardo’s Virgin and Child with Saint Anne was launched in June 2010, in collaboration with the Centre de Restauration et de Restauration des Musées de France (C2RMF). These efforts have successfully revived and returned clarity to this work, which had been greatly diminished due to discolored overpainting and multiple uneven varnish layers. Leonardo’s incredible genius as a painter is now much more readily apparent through the Saint Anne. The painting also recovers a nearly sculptural depth and relief, with its intense palette of pigments ranging from lapis lazuli blue to red lacquers and rich grays and browns.