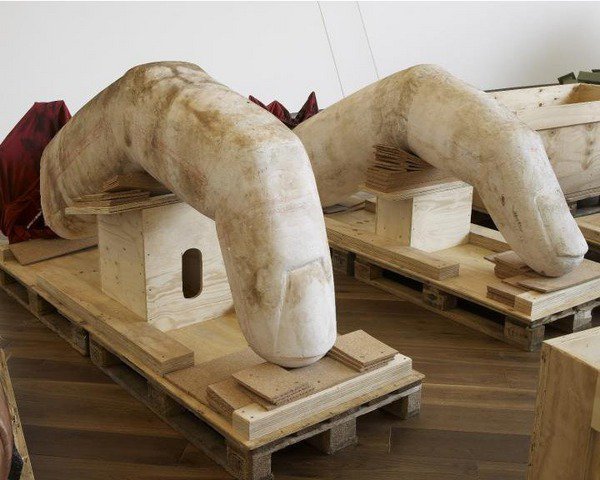 The town’s heritage as a centre of power for the ancient king Cunobelin (mythologised as William Shakespeare’s Cymbeline) and the principal city of Roman Britain, is the starting point for an exhibition of contemporary art that considers how history is recovered, represented and reenacted.

Camulodunum draws directly on themes embedded in firstsite’s new architecture. Located in a town where modern buildings neighbour monuments to antiquity, the firstsite building is designed to stand on ancient land without disturbing the remains of the unexcavated Roman buildings beneath.

Camulodunum explores themes of excavation, ritual and reenactment, gathering anecdotes from literature, popular culture and local legend. The exhibition considers how artworks negotiate their relationship to artefacts in the museum, the notion of objects as a source of information and the idea of contemporary culture as future historical record.

An 88-page catalogue has been published alongside the exhibition, featuring colour images, and essays by Louisa Buck, Michelle Cotton, and Charlotte Higgins. It is available from firstsite’s shop at a special exhibition price of £9.95.

The exhibition is accompanied by a series of talks, film screenings and other events, programmed for firstsite’s opening season.

...in turns gentle, intelligent, populist and subversive, the exhibition invites us to see Colchester's historic pageants alongside the work of the Neo Naturists – a post-punk performance group (including local boy Grayson Perry). The sexuality of ruins and statues is explored by Sarah Lucas's Penetralia works and Richard Hawkins's collages and ruminations on the "misuse" of statues' backsides. These gleeful subversions and potential portals are echoed in Robert Smithson's Chalk-Mirror Displacement (1969), a historic work that draws endless landscapes out of mirrors and piles of chalk on the gallery floor, and Rebecca Warren's vitrine of neons, sculptures and bits of trash, a tiny little wasteland of contemporary art. A civilisation in fragments which sits atop another civilisation in fragments.
Laura McLean-Ferris, The Independent

'An approachable charting of pathways between Colchester's history and the traditions of modern and contemporary art. Slices of the town's past, such as photographs of the Colchester Pageant of 1909 – an almost militarily effcient restaging of episodes from the town's history – are juxtaposed with tenuously Colchester-apt works of art, such as Andy Warhol's screen print of 1969, Soup II: Oyster Stew.'
Andrew Graham-Dixon, The Sunday Telegraph

'The sloping wall comes into its own with a newly commissioned series of phtographs by the Polish artist Aleksandra Mir. Playing on the theme of "six degrees of separation", she has found 100 connections, from Sir William Gilberd, a local scholar from the sixteenth century who served as physician to Queen Elizabeth I, to the present day. Called HELLO Colchester, the sequence is clever and amusing, and works well on the long curve.'
Richard Holledge, The Times