Inspired by a can of chrome spray paint left by a traveling friend, Bevilacqua had a revelation. He saturated an enormous old painting with spray paint, dripping in chrome. With that, a new body of work was born. 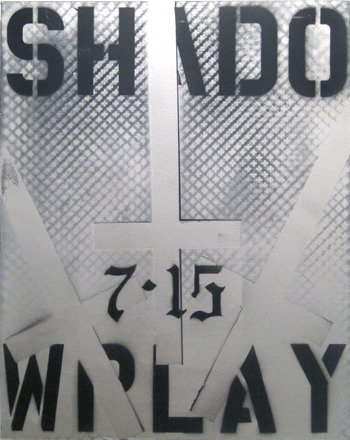 The Kravets/Wehby Gallery is pleased to announce the opening of Ceremony, a solo exhibition of new paintings by Michael Bevilacqua, opening on Thursday, March 29 and running through April 28, 2012.

Inspired by a can of chrome spray paint left by a traveling friend, Michael Bevilacqua had a revelation. He saturated an enormous old painting with spray paint, dripping in chrome. With that, a new body of work was born. Paint brushes have collected dust in the studio as spray paint takes over. Often, words become distorted and letters fall off, giving work containing pattern and symbolism a humanistic touch. Just as there is repetition in the work, DisOrder has become a sort of mantra that is repeated over and over, like a ritual song. For Bevilacqua, it is the ritual of painting that is his ceremony.

When Bevilacqua approaches new paintings, the thought behind them inevitably starts with a musical reference and the end result becomes a marker in time. An incorporation of meaningful dates, based on his personal experience and connection to the music, and letters from favorite songs come together in the paintings and create the New DisOrder, the basis for this period of work. The chrome and black resembles the industrial town in which many of the bands that influence him were birthed at FACTORY records, a Mancester based independent record label that started in 1978. Michael’s personal connection to the work is clear in his fanatical obsession with the paintings and music.

Michael Bevilacqua was born in Carmel, California and currently lives works in New York, NY. Over the summer, Michael will be showing a 30’ long painting at Gering-Lopez Gallery. Michael has exhibited work at the Louisiana Museum in Denmark, the Palais de Tokyo in Paris, Galleri Faurschou in Beijing, Deitch Projects in New York and the DESTE Foundation in Greece. This will be his first solo exhibition at Kravets/Wehby Gallery.