Works by Wang Dongling, Qiu Zhenzho and Xu Bing. Two calligraphers and one contemporary artist. Through their artworks, is possible to examine and discuss the relationship between calligraphy and contemporary art in order to find new possibilities for the future. 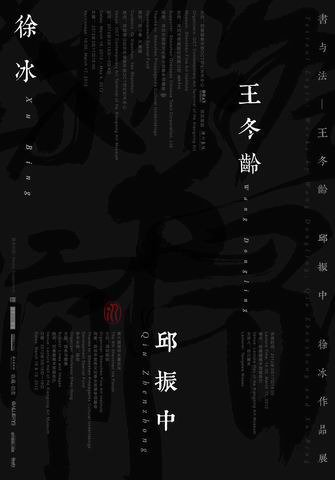 Wang Dongling is steeped in the traditional skills of calligraphy. His caoshu cursive script has not only broadened the visual experience of the calligraphic art, it has also explored numerous possibilities for the development of everything from desktop calligraphy to exhibition calligraphy, exploring the various possibilities for the act of writing. In his use of the brush, he has made painstaking experiments in movement from the movement of the fingertips to the movement of the wrist, movement of the arm and on to the movement of the entire body. In recent years he has focused a great deal of effort on understanding and expressing the relationships between the body and the work of art. The act of writing is an extremely important theme in traditional calligraphy. His methods and processes touch not only on the aesthetic qualities of the artwork but also on the mindset of the artist, even his views on life and the universe.

Qiu Zhenzhong is a calligrapher with the air of a poet and thinker. He is dedicated to the transition of calligraphy into contemporary art, opening up a new space for calligraphic creation through the expansion of materials and themes. Form and content have always been inseparable elements throughout the development of calligraphy. The artistic qualities of a work of calligraphy, how it is read and appreciated, depend on the words, sentences and passages as well as the brushwork, word structure and layout. This is the core value of traditional calligraphy. In order to embody this core value in a more open setting, Qiu Zhenzhong has spent the past thirty years engaging in rigorous research and ceaseless creative practice.

Xu Bing is an outstanding Chinese contemporary artist. Words have always been an important creative theme for him. From Book from the Sky and New English Calligraphy to Books from Earth, the artist has spent over two decades exploring the relationships between the expressive forms, meanings and the reading of words. The development of characters, changes in their makeup, their order and interpretation have all been important elements in the development of calligraphy. The emergence of such luminary figures of calligraphy as Li Si, Cai Yong, Wang Xizhi and Yan Zhenqing cannot be separated from the rise of the zhuan, li, cao and kai scripts. The emergence of so many strange forms of calligraphy between the Ming and Qing dynasties, represented by master calligrapher and thinker Fu Shan, seems to present to us the artist's thoughts on the limitations placed on writing by words. With his unique vision and expressive techniques, Xu Bing has opened up a new world of “words” for us while also providing a vast space for the future development of calligraphy.

We have specially invited Japanese calligraphy theorist Masao Tanigawa to serve as academic host for this exhibition. At the exhibition opening, he will present Japanese avant-garde calligraphy as part of the “Voice of the Humanities – He Xiangning Art Museum Academic Lecture Series.”

OCT Contemporary Art Terminal (OCAT) is a division of the He Xiangning Art Museum. Officially established on January 28, 2005, OCAT is China’s only non-profit contemporary art organization connected to a national art museum; it also has exhibition spaces in Shanghai.