New Measurement and Qian Weikang: Two Case Studies in Early Chinese Conceptual Art. Though one practice unfolded in the form of a group, and the other emerged in the work of an individual artist, both were quite lively throughout the early and mid-1990s, and both elicited much discussion for their rigorous approach to creation. 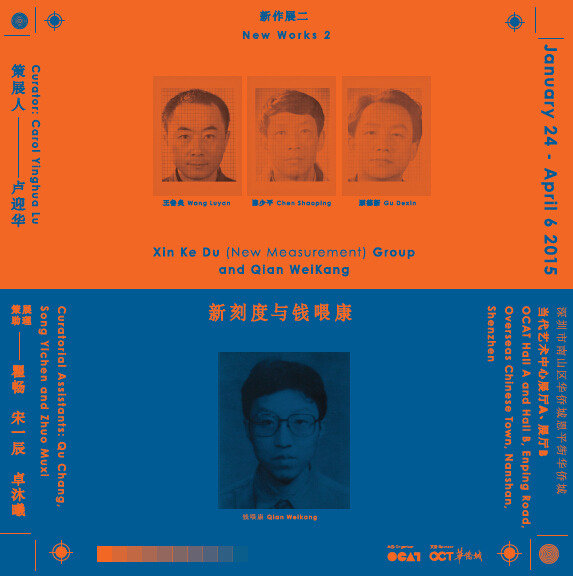 New Measurement and Qian Weikang: Two Case Studies in Early Chinese Conceptual Art is the second installment of OCAT Shenzhen’s research-oriented “New Works” exhibition series. This exhibition examines individual historic cases, expanding the field of vision for the understanding and recounting of artistic practice to the entire cultural context and historical awareness of the period, as well as these cases’ complex interactions with politics, society and ideas. Presenting the discoveries and ideas of this research work in the form of exhibitions and publications will allow us to more effectively understand the foundation and position of our current work.

The two cases examined in this exhibition are the New Measurement Group and artist Qian Weikang, which emerged in the late 1980s and early 1990s, respectively, and ended in the mid-1990s. These two instances of practice took place in Beijing and Shanghai respectively. Though one practice unfolded in the form of an artist group, and the other emerged in the work of an individual artist, both were quite lively throughout the early and mid-1990s, and both elicited much attention and discussion for their rigorous approach to creation. The work of both the New Measurement Group and Qian Weikang consciously maintained distance from the mainstream artistic experiences and values of the time, and stand as indispensable chapters in early Chinese conceptual creation. Meanwhile, these practices formed a relationship, both conscious and unconscious, of contention and collaboration with other creations of the time, and have formed an influence on later artistic practices and understandings that to this day cannot be ignored. Their works raised an appeal for the respect for defined rules in creation, and a rational approach to work that restrains individual emotions, wills and rights, opening up a creative field where ways of thinking and the artistic experience itself become the objects of examination and analysis.

The New Measurement Group was founded by Wang Luyan, Chen Shaoping and Gu Dexin in 1988 as a collective creative model. With the goal of removing all individualized behaviors and traces from creation, they closely discussed and developed a series of unique deconstructions of patterns, images and words based on rules devised through mathematical formulas, holding exhibitions in Japan, Germany, Spain and the United Kingdom. In 1995, through a majority vote, they decided to destroy all documents presenting their work process and to end their group practice. Afterwards, Chen Shaoping did not engage in individual artistic practice, while Wang Luyan and Gu Dexin continued their independent careers. Gu Dexin ceased artistic creation in 2009. The works of the New Measurement Group include the five books they published, but more important was the “close collaboration” working model based on agreement between the three artists and built through longstanding, strict adherence to their agreed procedures. This creative model guided by the construction, revision and execution of rules, and aimed at the restraint of individuality, was at once an artistic concept, as well as artistic language itself.

Qian Weikang, who was also active in the early 1990s, focused his observations and depictions on the basic state of materials. Within a few years, he carried out a series of experiments and creations, using measurement to define the range and outcomes of the actions of the main subject, using self-regulation and practicing self-restraint in a notion and spirit of the subject restraining the subject. In the process of creating art, Qian Weikang interacted closely with another Shanghai artist, Shi Yong. They discussed many things together, and collaborated on exhibitions. Though they did not form a group, they shared much in common in terms of creative ideas and perceptions of the art system of the time. Qian Weikang ceased his artistic practice in 1997, and did not take part in any art industry events or activities since then. Shi Yong continued his creations and his participation in the art system.

In art history accounts of the 1990s, discussion of the New Measurement Group and Qian Weikang are mainly brief and dismissive, often lumping their cases into the categories of media experimentation or conceptual experimentation, and describing their creations as marginal. This field of vision for art history research, wherein widely transmitted creations and those creations affirmed by mainstream values make up the main focus of accounts, has to a certain extent turned the work of the New Measurement Group and Qian Weikang into hidden, individual cases. This deficiency of conceptual resources had brought much difficulty to the research of art workers, and solidified the monolithic values system, hindering our ability to observe the system of artistic creation as an organic whole through multiple dimensions, as well as a more diverse evaluation of the influence of creations and ideas.

In early 2014, the curatorial team of OCAT Shenzhen, led by director Carol Yinghua Lu, began field research on the three artists of the New Measurement Group and Qian Weikang, other creators active in that period, and critics and curators who worked closely with these four artists, collecting large amounts of historical documents in order to re-create and restore their artworks and working environments, to explore the creative motivations and conceptual processes of these now-ceased artistic practices, in an attempt to thoroughly document, describe and reshape their work and context. Revisiting their practices as later arrivals and researchers some twenty years after the fact, the historical disputes that arise can perhaps lead us to a new discussion of the selective focus or oversights of history. On this foundation, the publication New Measurement and Qian Weikang: Two Case Studies in Early Chinese Conceptual Art will be released after the exhibition opening.

The New Works Exhibition examines and observes the past and present. “New Works” refers not only to the vanguard creations and ideas of the field of contemporary art, but also the rediscovery and new discussion of the work of the past. This new observation is in order to rediscover the threads of work and ideas that were not sufficiently discussed in the past, to expand the dimensions of historical context, and to understand the foundation and position of our current work in a richer and more open context, so that we can resist decontextualized approaches to work and exposition, and the forgetting, ignorance and fin-de-siècle sentiments and celebrations that come with them. The exhibition not only presents new creations by artists, but also re-envisages the events, works, discussions and ideas of the past, while also presenting pioneering curatorial and theoretical practices, using self-arrangement and self-explanation to promote our awareness and creativity in the fields of theory and ideas.

About the Curator:
Carol Yinghua Lu is a critic and curator based in Beijing. She is currently the artistic director at OCAT Shenzhen, a contributing editor of Frieze magazine and a member of the editorial board of The Exhibitionist magazine. In 2013, she received the first fellowship from the Tate Research Centre: Asia Pacific. She served on the Golden Lion Award jury committee for the 2011 Venice Biennale, and as a co-curator for the 9th Gwangju Biennale in 2012. In 2013, she was invited to serve as a visiting curator at Museion in Bolzano, Italy. She is currently working together with artist Liu Ding on a research project titled From the Issue of Art to the Issue of Position: the Echoes of Socialist Realism, which reevaluates the perspectives and methodology of accounts of Chinese contemporary art. Her publications include Little Movements: Self-Practices in Contemporary Art I, Little Movements: Self-Practices in Contemporary Art II, Accidental Message: Art is Not a System, Not a World (editor, with Liu Ding) and Art History After Modernism (annotations, with Su Wei).