Alison Knowles, Secrets of ordinary things. An exhibition of sound sculptures in paper, works that utilize dried beans as acoustic material, a suite of sun prints utilizing cyanotype print methods, and an installation produced with students especially for the McBean Gallery. Michael Lazarus: approximately a dozen paintings, ten recent drawings, on public view for the first time, and a new work made especially for the exhibition. 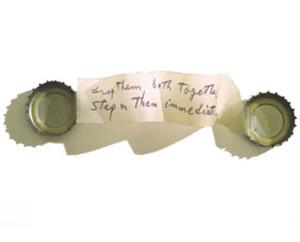 The San Francisco Art Institute is pleased to announce the residency and exhibition of works by intermedia artist Alison Knowles. Continuing the school's innovative integration of its academic and public programs, Knowles's March residency and interdisciplinary intensive course will culminate in an exhibition in the Walter and McBean Galleries of sound sculptures in paper, works that utilize dried beans as acoustic material, a suite of sun prints utilizing cyanotype print methods, and an installation produced with students especially for the McBean Gallery. Secrets of Ordinary Things will be on view March 28 - May 10, with a reception and preview on Thursday, March 27, from 5-7 pm, and a lecture by the artist on Wednesday, April 2, 7:30 pm.

Trained in painting and graphics, Alison Knowles studied with Josef Albers, Richard Lindner and Adolph Gottlieb graduating with an honors degree from the Pratt Institute in 1956. In the late fifties, she exhibited abstract paintings, and by 1960 projected and silkscreened directly onto canvas for a show at the Judson Gallery in New York. Associated with John Cage's legendary class at the New School, she introduced her work internationally as one of the founding members of Fluxus that first toured Europe in 1962. Knowles is a noted innovator of performance art, installations, sound art, poetry, and bookmaking, often combining these practices into intermedia works that focus on the interdependence of sight, sound, taste, and touch.

Knowles achieves this integration through various works that often focus attention on small events: the sound of beans pouring through an elongated sculpture, the sound of two pieces of sandpaper as they are rubbed together, the waterway-like patterns found in handmade bread. In a word, on the moment. 'For reasons which I do not know,' writes Knowles, 'I do not make things that have their greatest beauty shown in resting still. This thing that the work is about is something glanced at peripherally, and gone.' For Knowles what is big, strong, and steady misses the mark of a truth/beauty context that is lifelike.

Knowles continues to expand the spirit of Fluxus in her work, much of which takes food as its subject - her The Book of Bean, for instance, shown in the Venice Biennale, is comprised of a book so large that the visitor can walk through it, sit on a chair mounted on page 9, eat bean soup in it, and use it as a performance space. Likewise, her Bean Culture Instruments, on view in this exhibition, are sufficient in themselves as visual objects, some of them paper pouches, brittle and chrysalis-like in appearance. Yet the sound these objects make when 'activated' - the rush of the cascading beans when they're shaken, turned, or overturned - return the objects to the human realms of action, intention, and specific, though unstated, usage.

Her cameraless cyanotype prints use photosensitive emulsions to engage the sculptural qualities of light itself, setting a dialogue between images in shadowy, opaque colors that light has left behind, and the simple fact of the light's having been there at all, producing active documents of one-time sets of circumstances. A number of the works in the exhibition were composed by Knowles during residencies at Dieu DonnÃ© Papermill, New York City, Cave Paper, Minneapolis, MN, and the Women's Studio Workshop, Rosendale, New York.

With an over 40-year exhibition history, Alison Knowles's work has been shown at the Guggenheim Muesum in New York (1969), the Venice Biennale (1983), the Queensland Art gallery in Brisbane, Australia ((1997), Documenta X in Kassel, Germany (1997), the Museum of contemporary Art inLos Angeles (1998), and the Whitney Museum of American Art in New York (1999-2000), among other venues. In 1995, a retrospective tour of her work, Indigo Island (with catalogue), opened at the Stadtgalerie SaarbrÃ¼cken, Germany, toured to the Centre for Contemporary Art Warsaw, Poland and the Museet for Samtidskunst Roskilde, Denmark. Her book works, Loose Pages, the Book of Bean, and A Finger Book appeared in the 80's and contain her experiments with the sound, feel, and structure of paper. Mid-90s, Left Hand Books published Spoken Text and Bread and Water.

Image: Alison Knowles (with Philip Corner and Bill Fontana), Gentle Surprises for the Ear, 1975, collection of the artist.
_________

The San Francisco Art Institute is pleased to announce an exhibition of works by Brooklyn-based artist Michael Lazarus. Featuring work from 1997-2003, the exhibition is on view March 28 through May 10, with a reception and preview on Thursday, March 27 at the Walter and McBean Galleries.

For his first major solo exhibition in a public institution, Lazarus will exhibit approximately a dozen paintings, ten recent drawings, on public view for the first time, and a new work made especially for the exhibition. In conjunction with the exhibition a full-color brochure will be published.

Michael Lazarus's paintings and drawings systematically challenge convention and form. Using oil, enamel, and collage on irregularly shaped wood panels, Lazarus creates dynamic compositions through the play of recurring visual motifs and formal devices. Often mistaken for solely geometric abstraction, Lazarus's works include recognizable imagery such as brackets, palm fronds, feet, hands, and -- one of the most frequently occurring of these graphic emblems -- a stylized face.

The mask-like 'face' evokes a range of expressions in Lazarus's works, from playfulness and whimsy to malevolence and peril. While the face's physical presence is frequent, its presentation is consistently altered through crops and splices, challenging the viewer to locate its mutation.

For instance, no title (2001) presents a circular pattern comprised of hundreds of small-collaged elements. Upon close inspection, the omnipresent face rears its head as the templatex{2014}only this time it has been elliptically altered, and cut from magazine images of flesh. While the artist suggests such visual clues as entry points, he offers no specific narrative. Rather, Lazarus deploys his fixed graphic images through a myriad of formal strategies, abstracting narrative and figuring abstraction. The viewer's imagination and understanding complete the experience.

Breaking the usual two-dimensional boundary of most painting, Lazarus's pieces are wall bound, but present a sculptural presence much like Frank Stella's chevron paintings of the late 1950s and early 1960s. Whether he installs the works in corners or cuts areas out of them, Lazarus treats the works as objects rather than simple planes. The end result seductively lures the viewer to consider each work as a complex amalgam of both signs and forms. Add to this mix Lazarus's unusual, eye-catching color palette, and collaged images of textural elements such as hair, skin and flowers, and one finds in these nearly symmetrical compositions a visual language that combines the graphic, the tactile, and the emotive.

Holland Cotter writes: 'Mr. Lazarus's work seems to operate on a dual principle of attraction and repulsion, of psychological push and pull, though the exact dynamic is hard to define. Again one thinks of Tantric painting, so entertaining in its gruesome delicacies. Enjoy, it seems to say, and be afraid.'

Michael Lazarus studied at the Rhode Island School of Design, Providence, and the School of Visual Arts, New York. He has exhibited nationally and internationally including exhibitions in New York, Los Angeles, Paris, Amsterdam and Montreal. In 2002, he participated in the international group exhibition Guide to Trust No. 2 at the Yerba Buena Center for the Arts in San Francisco. The artist lives and works in Brooklyn and is represented by Feature Inc., New York and Marc Foxx, Los Angeles.

Public Programs at the San Francisco Art Institute are made possible in part by the California Arts Council and Grants for the Arts/San Francisco Hotel Tax Fund.