Lebanese Rocket Society: Part III, IV, V. Video and sound installation, a photographic series and the making of a rug. Documentation from Part I and II of the project are also be shown during the exhibition. 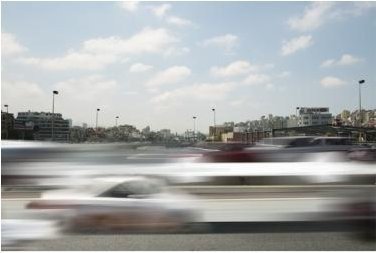 For their first solo exhibition at The Third Line, Joana Hadjithomas and Khalil Joreige continue their ongoing research on the Lebanese Rocket Society and explore three new bodies of works through a video and sound installation, a photographic series and the making of a rug. Documentation from Part I and II of the project will also be shown during the exhibition.

The Lebanese Rocket Society, an ongoing project comprised of a series of installations, examines the forgotten Lebanese space program that began in the early sixties at Haigazian University. A group of students, led by Professor Manoug Manougian, created and launched rockets for space study and exploration. More than ten Cedar rockets were launched, which gave rise to mass celebration and international recognition of scientific and cultural excellence. Lebanese Rocket Society: Part III, IV, V ponders the apparent absence of this program from society’s personal and collective memory, shedding light on perceptions of the past and present—and the imagination of the future, exploring the notion of a collective dream.

To fight the oblivion in which the project sank and question the notion of monument, Hadjithomas and Joreige recreated a scale reproduction of the Cedar IV rocket, which was exhibited at the 2011 Sharjah Biennale. Restaged, a photographic series documents the reenactment of the rocket’s transportation through the streets of Beirut, capturing traces of strange occurrences throughout.

The exhibition also includes A Carpet; a rug that bears the image of the Cedar IV Rocket stamp that was produced in 1964 to honor this scientific project. The latter was followed by the creation of a handmade carpet by an Armenian orphanage in Lebanon, which was sent to the President of the United States in honor of the great achievement. Re-produced in Armenia, Hadjithomas and Joreige’s rug is an evocation, a reenactment, a tribute to the strengths to the survivors and descendants of the Armenian ethnic cleansing in 1915.

The Golden Record represents aspirations in a different way. The installation shows the Golden Record filmed as it turns on the record player that enables the viewer to discover a portrait, through sound representation and reconstitution, of Beirut and the world in the 60’s – highlighting such historic events as Space race, revolutionary ideas and pan-Arabism.

Joana Hadjithomas and Khalil Joreige are Lebanese filmmakers and artists whose cinematic and visual art practices intertwine. Their films and installations emerge from a common concern with image making and storytelling. Together, they have directed documentaries such as Khiam 2000-2007 (2008), and El Film el Mafkoud (The Lost Film, 2003), and feature films including Al Bayt el Zaher (The Pink House, 1999), and A Perfect Day (2005). Their last feature film Je veux voir (I want to see), starring Catherine Deneuve and Rabih Mroué, premiered at the Cannes Film Festival in 2008 in the ‘Un Certain Regard’ section and was granted the Best Singular Film Award by the French Syndicate of Cinema Critics that year

Hadjithomas and Joreige have created numerous photographic and video installations, their artwork has been shown in many museums, biennales and art centers from around the world and is part of important public and private collections. They are currently completing a feature documentary on The Lebanese Rocket Society. In October 2011, they were announced as winners of the Abraaj Capital Art Prize 2012 and will unveil their new work at Art Dubai from 21–24 March 2012 www.abraajcapitalartprize.com

About The Third Line
The Third Line is an art gallery that represents contemporary Middle Eastern artists locally, regionally and internationally, with a gallery space in Dubai. In addition to on-going exhibitions, The Third Line hosts non-profit, alternative programs to increase interest and debate in the region.