The exhibition features the work of Cinthia Marcelle, Teresa Margolles, Tercerunquinto and David Zink Yi and provoked the geopolitical boundaries of the 'historically correct' to relocate the shifting events that occurred on the street to the museum-a power institution. 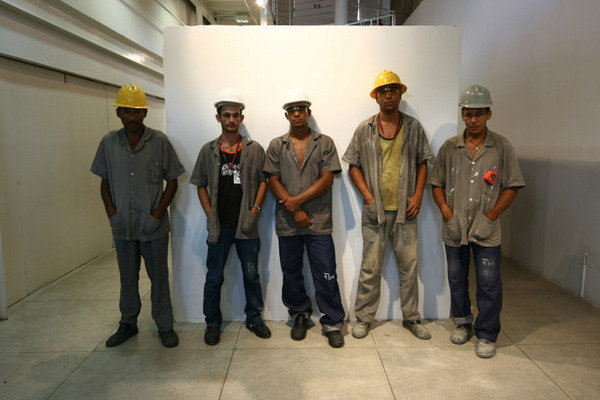 As part of the multiple institutional collaborations that both museums have developed in the recent years, the Sala de Arte Público Siqueiros (SAPS) and Tate Modern—museums with different missions—experienced a similar curatorial working process to achieve a common ground on the analysis of the Americas' artistic practices. Considering the history and increasingly fragile notion of Latin American Art, four artists that share an ability to position their practices against shifting cultural, economic, and social situations were selected. Their works, at the same time, confronted each museum with the peripheral and marginal situations, which distinguished the crisis in a post-industrial society.

The Redeeming Institution at the Sala de Arte Público Siqueiros and No Lone Zone at the Tate Modern showed the work of Cinthia Marcelle (Brazil), Teresa Margolles (Mexico), Tercerunquinto (Mexico), and David Zink Yi (Peru-Germany). These exhibitions provoked the geopolitical boundaries of the "historically correct" to relocate the shifting events that occurred on the street to the museum—a power institution. No Lone Zone focused on different levels of representation and documentation embedded in the works of these artists, while the exhibition at the SAPS appeased to the voyeur that involves an audience through participation.

The 2011 England riots, for Tercerunquinto, allowed the study on how the Western economic crisis masked the context of socio-cultural difference that could re-designate the role of the social groups displaced from the center of power in this society, but at the same time, how the obvious differences among social classes in Latin America could give way to the collapse of the prevailing socio-political system. With the qualities of a daily news journal, Tercerunquinto confronted the public with a re-contextualization of President Bill Clinton's memorable phrase: "it's the economy, stupid." With her acute ability to act globally, Teresa Margolles continued to trail violent murders. This is not about generating objects that pertained to the style of the terminologies of art history, but to relocate the "vessels" of these violent situations. On her part, Cynthia Marcelle drafted a precise discourse linked to a critical situation resulting from the current economic crisis. Her work is related to the development of situations of survival that cause violence and nostalgia. Finally, David Zink Yi seemed to behave in an opposite manner; but his gesture is a painstaking effort to achieve a technical perfection that reaches another level of reality. The Peruvian artist sought to advance a methodology that disregards any nihilistic or activist strategy. On the streets of Cuba, Zink Yi searched for traditions that are not forgotten, but marginalized; and through this study deconstructed cultural notions of the modern sense of nationhood, while moving towards the global sphere.

As a space that challenges political ideal, while enhancing its function as a site-specific museum, for the SAPS the collaboration with Tate Modern was necessary to assess its prevailing character as a National Museum. In London, the exhibition was curated by Iria Candela and in Mexico City by Taiyana Pimentel.