Framework. Her piece will likewise cover a large portion of the building facade, she has taken timber framework elements from two buildings on Roemer square and combines them into an ornament composed of modules. Pousttchi's monumental photo installations broaden the traditional understanding of photography. 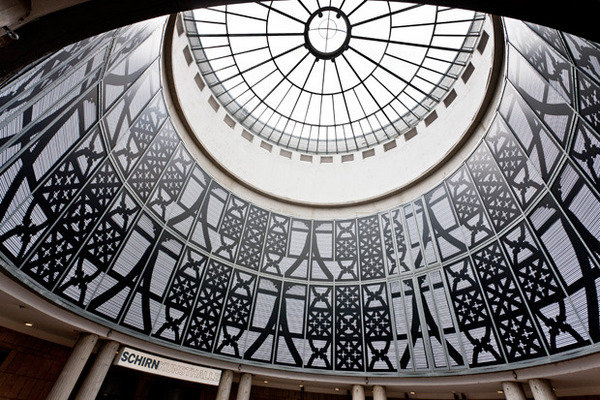 The Schirn Kunsthalle is showcasing a new work by German-Iranian artist Bettina Pousttchi specifically designed for the exterior of the Schirn. Similar to her well-received installation “Echo” (2009/10) in Berlin – where she resurrected the just demolished Palast der Republik (the former East German parliament building) in the form of a monumental photo installation applied to the façade of the Temporäre Kunsthalle (Temporary Art Hall) – her Frankfurt piece will likewise cover a large portion of the building façade. In “Framework” Pousttchi has taken timber framework elements from two buildings on Frankfurt’s Römer square out of the context of their original façades and combines them into an ornament composed of modules, each measuring one by one meter, infinitely repeated, lending a harmonious rhythm to the overall look of the Schirn. In their interlinking of architecture, sculpture, and photography Pousttchi’s monumental photo installations broaden the traditional understanding of photography. They examine the question of how to approach urban space and memory while at the same time exploring the temporal dimension of architecture.

Bettina Pousttchi, born in Mainz in 1971, lives and works in Berlin. She studied at Kunstakademie Düsseldorf and graduated from the Whitney Independent Studio Program in New York. Her photographic works, videos and sculptures have been exhibited at an international level since the late 1990s, including group exhibitions at, among other venues TENT Rotterdam; Lewis Glucksman Gallery, Cork; Martin-Gropius-Bau, Berlin; Museum on the Seam, Jerusalem; Kunsthalle Detroit; Centro Cultural Recoleta, Buenos Aires; and Schirn Kunsthalle, Frankfurt as part of the exhibition “Die Jugend von Heute” (The Youth of Today) in 2006. In addition to solo exhibitions in Von der Heydt-Kunsthalle Wuppertal (2007), Temporäre Kunsthalle Berlin (2009) and Kunsthalle Basel (2011), Pousttchi also took part in the Venice Biennale in 2003 and 2009.

In her works Bettina Pousttchi reflects on the urban and social changes that mark our times. Her photographs, films, sculptures and installations enable us to experience these fundamental changes to the urban fabric. The spectacular site-specific interventions with which Bettina Pousttchi makes public spaces and buildings the objects of her works are the logical continuation of the artist’s artistic investigation of urban space.

With “Echo” (2009/10) she resurrected the former Palast der Republik for a period of six months in the form of a photo installation consisting of 970 individual posters applied to the façade of the Temporäre Kunsthalle in Berlin. The former East German parliament building had recently been demolished a mere 30 years after its completion in order to create space for the reconstruction of the Berlin Stadtschloss, which in turn had been torn down in 1950. As such, by means of architecture, in a period of less than 70 years three distinct political systems had erected prestigious structures on Berlin’s Schlossplatz as symbols of the respective era. The artist demonstrated how quickly architecture can lose its ascribed meaning and questioned how a location anchored in the collective memory is perceived, and the role documentary photography plays between personal memory and official written history.

As a starting point the artist now encounters a similarly complex situation with the creation of the façade of Schirn Kunsthalle. At present, parts of the destroyed Old Town are currently being reconstructed on the neighboring land between the cathedral and Römer square. Large parts of an urban structure which had grown homogenously over the course of centuries had been almost completely destroyed during World War II; in the 1970s remaining constructions, or those that were only partly destroyed, were dismantled and replaced by the Technisches Rathaus (Technical town hall). The solid concrete building, its architecture typical of the time of its construction, was to stand for just 35 years. Now individual historical buildings are to be reconstructed and integrated harmoniously with new buildings, which in turn, with regard to volume and materials, are to resemble historical structures.
There are a number of fundamental questions associated with this: What history is being reconstructed here, why, and by whom? What is the half-life of architecture, and who decides when it ends?

With her monumental photo installation “Framework” Bettina Pousttchi addresses questions such as these, while also offering a commentary on the building itself, whose façade she is using. The Schirn is a postmodern building, which opened in 1986 and forms the termination of the area around the cathedral and Römer on the side facing the Main River. For “Framework” Pousttchi studied picture archives and spent over a year photographing the Schirn and the surroundings.
The artist took existing framework elements from two half-timbered buildings on the Römer square nearby – the “Schwarzer Stern” (Black star) and “Wertheym” – out of their original context and recombined them in a repetitive structure with a Middle Eastern feel to it. The resulting black- and-white frieze will be applied directly to the sixty-four windows of the rotunda in the Schirn’s entrance and the sixty-seven windows of the entire eastern façade using photo prints. The façade of the “Schwarzer Stern”, with its many windows and elaborate half-timbering, originally dates from the 1650s. Like most of the buildings in the old town, the “Schwarzer Stern” was heavily damaged in bombing raids in 1944 and, together with the eastern row of the Römer – the Sam- stagsberg – reconstructed in 1983. By contrast, the “Wertheym” house is one of the few buildings that survived the bombing.

Bettina Pousttchi will create a perplexing situation with “Framework”. On the Schirn’s façade photographic elements of timber frameworks, originally a purely constructional element, are transformed into pure decor; seeing this applied to a post-Modernist building is for some rather absurd, while others find it a convincing statement. Yet the production process is not so far removed from the way historical buildings are reconstructed; essentially, a historical-looking façade is put on a carcass constructed using cutting-edge methods and using modern materials. This way Pousttchi also highlights the modern-day longing for tradition and historical construction forms that give us new versions of old city palaces and new old towns that may take on a historical appearance, but are of course by no means intended to assume their original function.

As in Pousttchi’s earlier works, here too the photographs of half-timbering elements are digitally altered – a process the artist has employed deliberately and often, creating the impression of old television screens.

The artist also employs this visual code in her on-going project “World Time Clock” (in progress since 2008); there are eight motifs from this project currently on display on the first storey of the Schirn’s rotunda. Pousttchi photographed clocks in Shanghai, Istanbul, New York, Bangkok and Seoul, all at precisely 1.55 p.m. The use of a single time of day creates equality between these far-removed locations, and impressively underscores the transnational approach Bettina Pousttchi takes in her works.

This exhibition has been made possible by SCHIRN ZEITGENOSSEN, a circle of patrons of young art. The Schirn Kunsthalle thanks Michael Fabich, Andreas Fendel, Ralf Herfurth, Hartmuth Jung, Angela and Thomas Kremer, Sunhild Theuerkauf-Lukic and Andreas Lukic, Vasiliki Basia and Jörg Rockenhäuser as well as Antonie and Heiner Thorborg for their commitment.

The exhibition has been made possible by SCHIRN ZEITGENOSSEN.