Multiple Choice. All of his works are based on the principle of the collage or montage, even his primary intention is not one of innovation or originality but of discrepancy and contradiction. 50 works are exhibited in rooms on the ground floor which lend theyself to illustrating the connections and contradictions in relation to works by other artists in the Brandhorst Collection such as Sigmar Polke, Joseph Beuys, Eric Fischl. 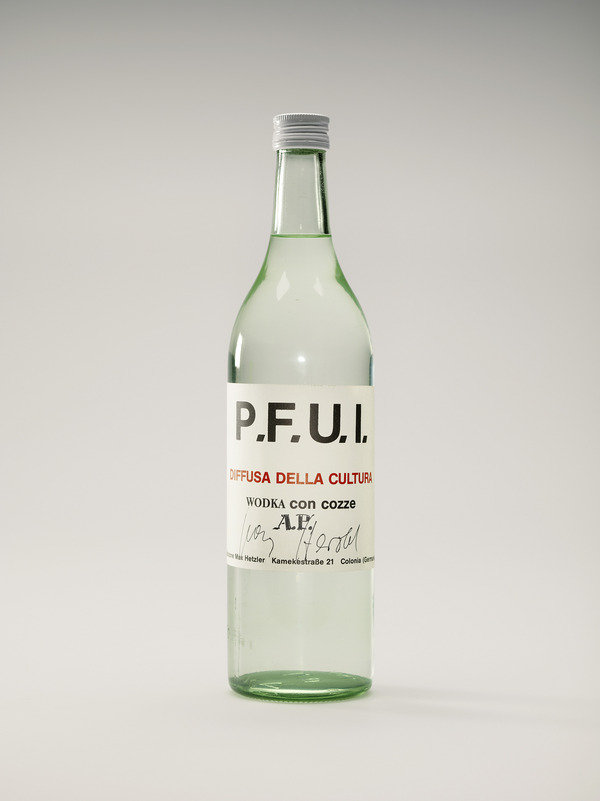 Munich, April 2012 | Like virtually no other artist of our times, Georg Herold ironically cites the art of the 20th century in its diverse forms, rendering it disillusionary or absurd. Herold is not a painter although he creates pictures, not a sculptor although he makes sculptures and installations, not an architect although he builds. He embodies the negation of the artistic world in the academic tradition. All of his works are based on the principle of the collage or montage, even his primary intention is not one of innovation or originality but of discrepancy and contradiction. His demystification of established notions that have become the norm does not stop in the face of Kazimir Malevitch, Marcel Duchamp, Donald Judd and Joseph Beuys, among others, either. In this way Herold breaks away from conventional codes in art and encourages others to reflect upon functions they are still capable of perceiving at all, and to which they can turn today. He is considered one of the most important and influential artists not only of his own generation.

In the early 1980s Georg Herold used cheap roof slats and, since 1988/89, has repeatedly worked with expensive Beluga caviar in his pictures, objects, multiples and installations. The plain wooden slats still play a pivotal role in his works to this day, since – as he says – they “can be made to match every statement exactly.” While such objects were considered non-aesthetic at that time, the use of caviar was seen as a provocation. Bafflement changed into a slight feeling of horror and a certain disgust. Over the past 40 years, an extensive and complex œuvre has been created that has been shown successfully in numerous solo and thematic exhibitions both nationally and internationally. Apart from roof slats and caviar, Herold has repeatedly used bricks, thread, buttons and nails as well as tea strainers, handbags, nylon tights, carpets, etc. “As a matter of principle, I never use materials that speak their own language. That’s why I pick on rough, stupid materials that don’t ask questions,” the artist says.

In the past few years Herold has, surprisingly, returned to the human figure. Through his sketchily outlined figures he aims at showing how mankind has not just become alienated from itself in a stupor brought on by modern civilisation, but is simultaneously puzzling and trite, aggressive and defenceless, sexually uninhibited and disembodied, affected and coarse – or more precisely, Herold’s slat figures are not role models of mankind but bundles of highly contradictory characteristics, possibilities and capabilities. As such, they illustrate the status quo.

The concept of the exhibition was devised together with the artist, while it was clear that the multiples and sculptures in the Brandhorst Collection would be included. Apart from recent works, older ones are also on display to highlight contextual and formal correlations.

Individual works are exhibited in rooms on the ground floor which lends itself to illustrating the connections and contradictions in relation to works by other artists in the Brandhorst Collection such as Sigmar Polke, Joseph Beuys, Eric Fischl and Jannis Kounellis, among others.

There are fifty works by the artist in the Brandhorst Collection that the Museum is now exhibiting together with a similar number of other figurative works and installations until 2 September. Georg Herold’s works can be found in a number of private and public collections.

Georg Herold was born in Jena in 1947. He was arrested in 1973 for attempting to flee from East Germany. Having been sentenced to prison, his release was funded by West Germany. After a brief period in Munich, he began studying under Sigmar Polke in Hamburg and, while there, became friends with Werner Büttner, Martin Kippenberger and Albert Oehlen, among others. He has held a professorship at the Kunstakademie Düsseldorf since 1999. Herold lives and works in Cologne. The exhibition is presented in selected rooms on the ground floor and lower level of the Museum Brandhorst and is accompanied by a programme of guided tours and related events.

An exhibition catalogue has been published by Snoeck Verlag with essays by Rudi Fuchs, Friedrich Wolfram Heubach and Armin Zweite, as well as catalogue entries for the multiples in the Brandhorst Collection. All exhibited works are illustrated. In addition, there is a biography and a bibliography.

Events
TUE 10.7.2012, 7 pm
All about me. Dialogue with the artist. Georg Herold and Armin Zweite, Director of the Collection
Admission 5,00 €
All guided tours and associated events are held in German. English guided tours may be booked at palais@pinakothek.de.

Further information and images are available by calling + 49.89.23805-1321 or via email at presse@museum-brandhorst.de