Music Without Masters. The exhibition brings together selected works from recent years and is accompanied by a new music project especially conceived for Badischer Kunstverein. The title inverts 'His Master's Voice', a trademark that was originally used for a gramophone and record label and is still contained in the logo of the global entertainment corporation HMV. Ruth Ewan is interested in the distribution, circulation and control of radical ideas through popular cultural channels. 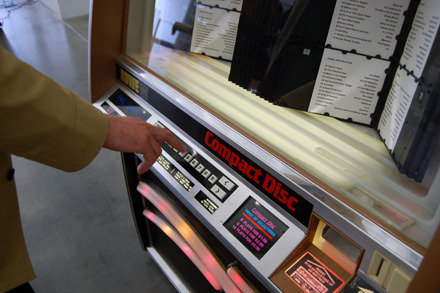 Ruth Ewan is interested in the distribution, circulation and control of radical ideas through popular cultural channels. Her works are often based on extensive research into specific historic moments. In parallel to her researched-based, documentary displays Ewan’s projects are often collaborative or participatory in nature, working with a wide range of individuals from young people to street musicians, historians and activists. The exhibition at Badischer Kunstverein gathers projects that stem from Ewan's engagement in popular music and how a song can transcend the dominant narratives of the times in which it is born.

The title of the exhibition, Music Without Masters inverts ‘His Master’s Voice’, a trademark that was originally used for a gramophone and record label and is still contained in the logo of the global entertainment corporation HMV. Ewan’s idea of the absent “master” echoes the autonomous nature of the subjects referenced by the artist as well as playing with the idea of the “master” in art or music.

In Did you kiss the foot that kicked you?, for example, Ewan invited over one hundred street musicians to perform Ewan MacColl’s song ‘The Ballad of Accounting’ across London over the course of a working week. Apotheosis (Paul) is a remake of a lost plaster sculpture depicting the performer and activist Paul Robeson, who like MacColl, was a cultural target of the USand UK Red Scare during the Cold War. The music video The Cutty Wren (Fred) is an animation made by ten year old Fred for a song dating back to the English Peasants’ Revolt of 1381. The video follows the narrative of the song in which the wren, symbol of absolute tyranny, is decapitated, divided and eaten by the peasants.

All projects in the exhibition are centred around the work A Jukebox of People Trying to Change the World, an archive of approximately 1,500 progressive, utopian and protest songs, which Ewan has been constantly expanding, editing and categorising according to specific themes since 2003. In Karlsruhe Ewan is exhibiting a revised version of the jukebox, in which she has added a selection of German protest songs sourced from different origins and times. Local soloists and music groups were invited to interpret these songs, which were recorded and absorbed into the jukebox archive. A selection of these songs will be performed live at the exhibition opening.

A publication will be produced to accompany the exhibition.

In the framework of the 21st European Culture Days Karlsruhe 2012.

Image: Ruth Ewan, A Jukebox of People Trying to Change the World, ongoing archive started in 2003