In his works, Aurelien Froment investigates the reception, montage, and experience of images and the spaces in which they exist. In Heidrun Holzfeind's film "forms in relation to life" (2014), current residents of the housing estate discuss their daily lives. 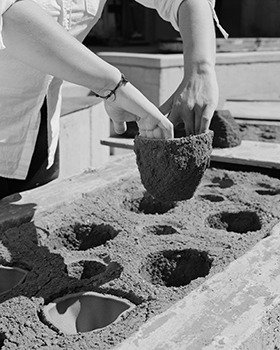 In cooperation, Badischer Kunstverein and Heidelberger Kunstverein show two simultaneous exhibitions by French artist Aurélien Froment, his largest solo presentation in Germany to date. In his works, Froment investigates the reception, montage, and experience of images and the spaces in which they exist, creating documents and exhibitions drawn from sources whose heterogeneity characterizes his practice.

In Froment's exhibition at Badischer Kunstverein, three projects reflect on historical sites: the autodidact postman Ferdinand Cheval's Palais idéal, the architect Paolo Soleri's experimental city Arcosanti, and the philosopher Giulio Camillo's theatre of memory. Each represents a historical shift and highlights an eccentric engagement outside the purview of the classical art canon.

Tombeau idéal de Ferdinand Cheval (2014) is the central work in the exhibition. Froment's 90 b/w-photographs document the unique language of forms Cheval deployed in his ideal palace (built 1879–1912). By activating a new form of archive, Froment transfers Cheval's "Wunderkammer" into the exhibition room: he photographed numerous figures, elements, and objects individually by masking their surroundings with black cloth, thus isolating them from the broader context of the sculptural monument. Cheval's work is at once revealed and concealed, thus serving up a panoply of bizarre forms for the viewer's own imagination.

The overwhelming number of images in Tombeau idéal de Ferdinand Cheval contrasts with the austere stage in the artist's film, Camillo's Idea (2013). This work addresses the memory theatre of the Italian philosopher Giulio Camillo (1480–1544), in which the entire knowledge of the world is stored in images, like entries in an encyclopedia. Froment uses the medium of film to approach Camillo's repository of knowledge and its depiction is delivered by a single female figure on stage.

The third and most recent group of works concentrates on the Italian architect Soleri, whose lifelong project was the construction of a model city as an alternative to urban sprawl. Froment transfers the effect of this impressive community by modelling significant structures from Arcosanti using Soleri's technique of earth casting. These objects, titled Earthworks (2015), are presented for the first time, accompanied by a new series of photographs titled "Negative Architecture" (2015). Soleri is also known for his ceramic windbells, which are still produced today. 21 bells were cast in Arcosanti for the Kunstverein: a symbol of Soleri's visionary architecture in miniature.

The Vienna Werkbundsiedlung comprises 70 model houses erected between 1930–32. Architects from Austria and abroad—including Adolf Loos and Margarete Schütte-Lihotzky—designed these single-family homes to provide maximum comfort in a limited space. The project was a response to the monumentalist strain in contemporaneous housing construction and an attempt to counteract the dogmatism of the Modernist movement.

In Heidrun Holzfeind's film, forms in relation to life (2014), current residents of the housing estate discuss their daily lives. Accompanying the residents for one year, Holzfeind gained insight into their personal needs and living concepts without passing judgment. The film shows how widely the individual residents' notions of their obligations towards Modernism differ and the conflicts arising from these discrepencies. The estate's social structure is closely intertwined with its architecture.

The film ends with a sequence where children wearing animal costumes run through the estate. Modernist architecture's ideals contrast with the realities of everyday life, which has created its own performative platforms and forms of representation. The original costumes provide an entrée into Holzfeind's other works, such as the photo series, animals (fashion book) (2013), and the short film, costume parade (2014). The sculptures Kletterdreieck (2014) and Hausbaukasten (2015) cite gymnastic and play structures of kindergartens in Vienna.