The first U.S. exhibition of Taryn Simon's photographic project 'A Living Man Declared Dead and Other Chapters I-XVIII' features 9 of his 18 chapters: the project highlights the space between text and image, absence and presence, and order and anarchy. Ecstatic Alphabets/Heaps of Language features works by 12 contemporary artists and groups presented in juxtaposition with works by key 20th-century artists, all of which concentrate on the material qualities of language-visual, aural, and beyond. It is presented in the form of a timeline from Filippo Tommaso Marinetti, John Giorno, Laurie Anderson, Tauba Auerbach, Trisha Donnelly, Nora Schultz... 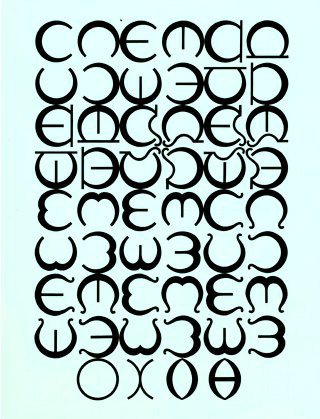 A Living Man Declared Dead and Other Chapters I-XVIII
May 2—September 3, 2012
The Robert and Joyce Menschel Gallery, third floor

New York, March 15, 2012—The Museum of Modern Art presents the first U.S. exhibition of Taryn Simon’s (American, b. 1975) photographic project A Living Man Declared Dead and Other Chapters I- XVIII. This powerful, elaborately constructed photographic work was produced over a four-year period (2008–11), during which the artist travelled around the world researching and documenting the living ascendants and descendants of a single individual, or “bloodlines,” and their related stories. In each of the “chapters” that make up the work, the external forces of territory, power, circumstance, or religion collide with the internal forces of psychological and physical inheritance. The subjects Simon documents include victims of genocide in Bosnia, test rabbits infected with a lethal disease in Australia, the first woman to hijack an aircraft, and the living dead in India. The exhibition is organized by Roxana Marcoci, Curator, Department of Photography, The Museum of Modern Art.

A Living Man Declared Dead is divided into 18 chapters, nine of which will be featured at MoMA. Each chapter comprises three segments. The first segment is a large portrait series systematically presenting individuals directly related by blood. The sequence of portraits is structured to include the living ascendants and descendants of a single individual. Simon also shows empty portraits, representing living members of a bloodline who could not be photographed. The portraits are followed by a text panel, in which the artist constructs narratives and collects details about the distinct bloodlines. She also notes the reasons for the absences in the portrait panel, which include imprisonment, military service, dengue fever, and women not being granted permission to be photographed. The last segment is Simon’s “footnote” panel, comprising images that expand and locate the stories in each of Simon’s chapters.

Ms. Marcoci says, “Simon’s major project locates photography’s capacity to at once probe complex narratives in contemporary societies and to organize the material in classification processes characteristic of an archive, a system that connects identity, genealogy, history, and memory.” Her collection is at once cohesive and arbitrary, mapping the relationships among chance, blood, and other components of fate. In contrast to the methodical ordering of a bloodline, the central elements of the stories—violence, resilience, corruption, and survival—disorient the highly structured appearance of the work. A Living Man Declared Dead and Other Chapters I-XVIII highlights the space between text and image, absence and presence, and order and anarchy.

ABOUT THE ARTIST:
Taryn Simon was born in 1975 in New York, where she lives and works. Her previous work includes Contraband (2010), an archive of images of items that were detained or seized from passengers and mail entering the United States from abroad; An American Index of the Hidden and Unfamiliar (2007), which reveals objects, sites, and spaces that are integral to America’s foundation, mythology, or daily functioning but remain inaccessible or unknown to a public audience; and The Innocents (2003), which documents cases of wrongful conviction in the United States, calling into question photography’s function as a credible witness and arbiter of justice. Simon's work has been the subject of monographic exhibitions at Tate Modern, London; Neue Nationalgalerie, Berlin; Whitney Museum of American Art, New York; Museum für Moderne Kunst, Frankfurt; Kunst-Werke Institute for Contemporary Art, Berlin; and MoMA PS1, New York. A Living Man Declared Dead and Other Chapters I-XVIII was shown in its entirety at Tate Modern, London (May 25, 2011–January 2, 2012), and Neue Nationalgalerie, Berlin (September 21, 2011–January 1, 2012).

SPONSORSHIP:
Generous support for the exhibition is provided by Robert B. Menschel and by Aaron and Barbara Levine.

WEBSITE:
The exhibition will be accompanied by a website that features an in-depth presentation of all nine "chapters" of A Living Man Declared Dead and Other Chapters I-XVIII on view at MoMA. The site, MoMA.org/tarynsimon, will launch on May 2, 2012. No. 11

The Museum of Modern Art presents Ecstatic Alphabets/Heaps of Language, an exhibition that looks at some of the ways contemporary artists have experimented with language, freeing it from the page and from its communicative and descriptive duties. The exhibition is on view from May 6 to August 27, 2012. Works by 12 contemporary artists and artists’ groups are presented in juxtaposition with works by key 20th-century artists, all of which concentrate on the material qualities of language—visual, aural, and beyond. The exhibition includes painting, sculpture, film, video, drawing, prints, and audio. The title is taken from two touchstone objects in the exhibition, one historical, the other contemporary: Robert Smithson’s seminal illustration of words as material, A Heap of Language (1966), and Shannon Ebner’s video The Ecstaticalphabet (2011), which animates, atomizes, and presents language as a time-based experience.
Ecstatic Alphabets/Heaps of Language is organized by Laura Hoptman, Curator, with Eleonore Hugendubel, Curatorial Assistant, Department of Painting and Sculpture, The Museum of Modern Art.

The contemporary works featured in this exhibition belong to a distinguished history of poem/objects and concrete language experiments dating to the beginnings of modernism, and include both Futurist and Dada objects as well as Neo-Dada experiments of the late 1950s, and works that sprang from international literary movements like concrete and sound poetry in Europe, Latin America, and the United States. This history is presented in the form of a timeline of objects in many mediums that tell a story of concrete language in visual art, including Filippo Tommaso Marinetti’s iconic Vive la France drawing from 1914; Marcel Duchamp’s disc poems for his film Anemic Cinema (1926); Noigandres (1952–58), the publication by Augusto and Haraldo de Campos that introduced the concept of concrete poetry to a wider public; Robert Smithson’s A Heap of Language (1966); and a re-creation of poet and performer John Giorno’s Dial-A-Poem (1969–), an interactive telephonic work exhibited in MoMA’s legendary Information exhibition (1970). Dial-A-Poem, which features poems by poets, artists, and musicians like John Ashbery, Joe Brainard, William Burroughs, Allen Ginsberg, Philip Glass, and Laurie Anderson, among many others, allows visitors to access poems inside the exhibition space, for free via telephone by dialing the following local New York phone number (347) 763-8001 (active from May 1 until the exhibition closes on August 27, 2012) and through MoMA.org.

Although they are similar in inspiration, the contemporary works in Ecstatic Alphabets/Heaps of Language represent a radical updating of the concrete language experiments of the 20th century. Moving freely among disciplines, the contemporary artists in this exhibition function simultaneously as poets, writers, performers, and graphic designers, producing hybrid works of art in which the letter, the word, and the phrase are transcribed into sounds, symbols, pictures, or patterns, scrambled, negated, and most importantly, freed from the page and, in some cases, the duties of communication altogether.

In the spirit of earlier concrete language experiments, all of the recent works in the exhibition have an abiding connection to poetry, which runs like a subtheme through the show, adding the ecstatic element to each work. The contemporary section of the show includes works by Ei Arakawa/Nikolas Gambaroff, Tauba Auerbach, Dexter Sinister (David Reinfurt and Stuart Bailey), Trisha Donnelly, Shannon Ebner, Paul Elliman, Experimental Jetset, Sharon Hayes, Karl Holmqvist, Paulina Olowska, Adam Pendleton, and Nora Schultz. Among the notable installations included in this portion of the exhibition is Paul Elliman’s Found Fount (1989–present), an ongoing collection of more than 10,000 manmade found objects (in the words of the artist, “a system to describe the world using the world itself”), which together create a usable font in which no character is used more than once. A legendary project that has been influential to artists and graphic designers alike, it is exhibited here for the first time. Other works include Auerbach’s RGB Colorspace Atlas (2011), a series of three computer-generated books, which offer a vibrant physicalization of the color spectrum in book form; and Arakawa and Gambaroff’s Two-Alphabet Monograms (2011), a set of 325 unique canvas flags that contain all combinations of two-letter monograms, which is combined with a single-channel audio recording of the phonemes being pronounced.

RELATED PROGRAM: Words in the World April 16—May 12, 2012 Various locations around the Museum In conjunction with Ecstatic Alphabets/Heaps of Language, MoMA hosts Words in the World, a series of performances and programs that examine the different facets of language and the relationship to performance. Words in the World looks at the intertwining of political, poetic, and linguistic structures through theatrical and staged events, dialogues and forms of public address, and experimental actions. Utilizing different presentation formats, the program takes place in various locations in the Museum from April 16 to May 12, 2012. The performance series is organized by Sabine Breitwieser, Chief Curator, and Ana Janevski, Associate Curator, Department of Media and Performance Art.
Words in the World explores performative aspects of language as a means of perpetuating the flow and movement of thoughts and as a tool for political activism. The series further reveals the life of words, signs, and numbers when liberated from their conventional forms and meanings.

PUBLIC PROGRAMS:
Artist Paul Elliman
Wednesday, May 9, 2012, 6:00 p.m., The Celeste Bartos Theater
Paul Elliman, a London-based artist featured in Ecstatic Alphabets/Heaps of Language, will discuss his work and how it relates to the material qualities of language. Elliman's work has engaged the human voice in many of its social and technological guises, as well as imitating other languages and sounds of the city. For the New York performance biennial Performa 09, he created Sirens Taken for Wonders, a project involving a live radio panel discussion on the coded language of emergency-vehicle sirens, along with several guided siren-walks through the city. In 2010 he contributed a series of whistled versions of birdsong transcriptions by Olivier Messiaen for the show We Were Exuberant and Still Had Hope, at Marres Centre for Contemporary Art, Maastricht.

Artist Shannon Ebner in conversation with writer Angie Keefer
Wednesday, June 20, 2012, 6:00 p.m., The Celeste Bartos Theater
Artist Shannon Ebner, whose work is on view in Ecstatic Alphabets/Heaps of Language, will be in conversation with writer Angie Keefer. Ebner was born in 1971 in Englewood, New Jersey. She received her BA from Bard College and her MFA in photography from Yale University School of Art. Selected group exhibitions include the 54th International Venice Biennale (2011); Sixth Berlin Biennale for Contemporary Art, Berlin (2010); Les Recontres d’Arles 2010/41st Edition, Arles, France (2010); 2008 Whitney Biennial, The Whitney Museum of American Art, New York (2008); and Learn to Read, Tate Modern, London (2007). Solo projects have been exhibited at the Hammer Museum (2011) and PS1 MoMA (2007). Ebner currently lives and works in Los Angeles, California. Angie Keefer was born in Alabama in 1977. She graduated from Yale University in 1999. In 2010, she wrote an eight-part text on octopuses and post-symbolic communication for a project by Dexter Sinister and Shannon Ebner called An Octopus in Plan View. In 2011 she co- founded The Serving Library with Stuart Bailey and David Reinfurt.

The exhibition is made possible by Hanjin Shipping.
Major support is provided by Jerry I. Speyer and Katherine G. Farley and by MoMA’s Wallis Annenberg Fund for Innovation in Contemporary Art through the Annenberg Foundation.
Additional funding is provided by The Junior Associates of The Museum of Modern Art.