In her new long-term photographic project "a f a r", Bertram spins a web out of exasperating promises between the partly ruined and partly completed, disruptions in translation and inconsistencies. 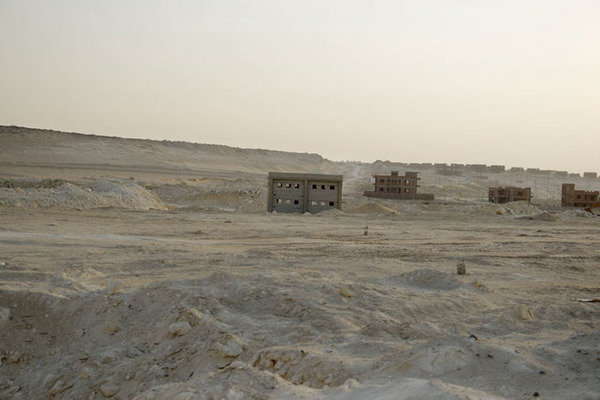 In her new long-term photographic project, "a f a r," Eva Bertram spins a web out of exasperating promises between the partly ruined and partly completed, disruptions in translation and inconsistencies in the public as in the private spheres.

Since 2006, Bertram’s photographs, taken when she lived in Cairo, are documentary because they are a result of observation. Nonetheless, there remains an unaccountable, vexing remainder that transforms the fleeting scenes into the surreal.
The recorded observations, entering into relationship with one another, are not about documenting, but rather about a subjective study dedicated to the nature of misunderstood intersticies.
Do we see, what we see? Is that which we observe, that with which we are presented? Isn't it rather hallucinatory architecture rising up out of the desert sand, ruins of folly? Or perhaps it is pointless projects still under construction that reveal the strangeness of an uninhabited world order that yet unmistakably originates in people?

"Bertram's high art, by means of the subtlest movements, reveals her as an image magician who understands the netherworld idyll around the corner just as well as the heavenly in the dumpsite. She propels her art of ambivalence with strict formality and refined compositional strategy.”
Andreas Steffens, from Irreführung ins Gewünschte, Eva Bertrams fotografischer Inselzauber, 2008.

Eva Bertram studied photography under Jürgen Klauke at the University of Essen (Folkwang Academy) in the Communication Design Program. Since 2007, she has taught at the New School for Photography, Berlin.
She has received many grants and awards, including: Working Stipendium of Fine Arts of Berlin; Stipendium for Contemporary German Photography of Alfried Krupp from the Bohlen and Halbach Foundation; Jury Film Prize of the International Short Film Festival of Hamburg.
Since 1993, Bertram has had various national and international solo exhibitions, as well as numerous group exhibitions, among others in Stadtmuseum Munich, Fotografische Sammlung / Galerie Nei Liicht, Centre d'Art, Dudelange / Kunstsammlungen Böttcherstrasse, Paula Modersohn-Becker Museum, Bremen / NGBK, Berlin / Fotogalerie Wien / Center of Arts, Alexandria / Musée National des Beaux Arts, Algier / Goethe-Institute in Casablanca, Damaskus, London, Manchester…
Her work is in public and private collections.
Eva Bertram lives and works in Berlin.