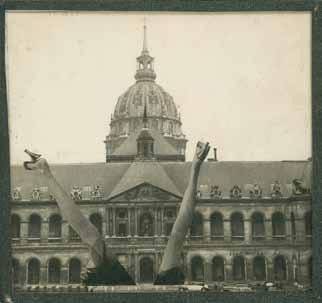 On 23 May, Hauser & Wirth opens 'The Historical Box' in its Piccadilly gallery in London, following the exhibition's critically acclaimed presentation in Zurich. Curated by Mara McCarthy, director of The Box, Los Angeles, this exhibition showcases key pieces by influential American artists including John Altoon, Judith Bernstein, Simone Forti, Wally Hedrick, Robert Mallary, Barbara T. Smith and Stan VanDerBeek, many of which have never been exhibited in the UK. 'The Historical Box' brings together a collection of important performance, film, dance, drawings and sculpture created during the political and social turmoil of the Sixties and Seventies in the USA. It aims not only to broaden the canon of art history, but also to highlight the contemporary relevance of the issues which these artists confronted over three decades ago.

Upon entering the main gallery, visitors encounter Wally Hedrick's massive installation, 'The War Room' (1967/68 – 2002) and the black tondo painting 'Rhondo (Irac, 2003)' (1970 – 2003). Initially a response to the Vietnam War, 'The War Room' is constructed from eight large canvases, which Hedrick referred to as 'wounded veterans'. Painted black and bolted together, these canvases create a room into which visitors can walk – immersing themselves in a dark contemplative space. Since its creation, Hedrick re-painted 'The War Room' twice for both the Gulf War and the Iraq War, emphasising the unavoidable parallels between these three conflicts.

Robert Mallary's sculptures and assemblages, made from abject materials draped over wood and metal frames, line the walls of the Piccadilly gallery. 'Harpy' (1962), named after the violent, mythological creature with a human head and bird-like body, is a tattered, winged figure, constructed from old tuxedos over thin steel rods and frozen in place with polyester resin. With its looming body, outstretched arms and precarious pointed base, 'Harpy' evokes both the foreboding presence of a large, menacing figure and the vulnerability of a skeletal frame that could collapse to the ground at any moment. Barbara T. Smith was a pioneer of feminist performance art during the Sixties and Seventies. Archival material from a selection of her most well-known performances, such as 'Feed Me' (1973) and 'Scan 1' (1974), will be on display in 'The Historical Box'. These interactive performances used quasi-religious rituals, often led by the artist, to explore issues of gender, power and the spiritual in an overwhelmingly secular society.

Also addressing issues of power and gender, Judith Bernstein's works combine fervent and gestural mark-marking with her own unique brand of humour. Bernstein's 'Horizontal' (1973), a large-scale drawing of a twisting screw that was infamously censored from a 1974 exhibition at the Philadelphia Civic Center Museum, will be shown alongside the drawing 'Supercock' (1966), created during Bernstein's time as one of the few female graduate students at Yale School of Art. Both 'Horizontal' and 'Supercock' present a comical critique of the male-dominated art world, a world into which Bernstein and many other female artists were just beginning to break. The exhibition is accompanied by a performance of Simone Forti's seminal Dance Construction, 'Hangers' (1961), first seen in Yoko Ono's Chambers Street loft in 1961. 'Hangers' straddles the boundaries of dance, performance art and minimalist installation. During the performance, dancers balance in looped ropes hanging from the ceiling whilst additional performers walk between them, causing the ropes to sway subtly as they brush past. The ropes will remain throughout the duration of the exhibition as a sculptural remnant of the performance. The exhibition will be accompanied by a screening of films by Stan VanDerBeek. VanDerBeek is considered by many to be one of the first multimedia artists.

Beginning as early as the Fifties and continuing throughout his career, VanDerBeek experimented ceaselessly with emerging forms of computer-based media and rudimentary animation. His works combined film with painting, photography, architecture, and mass-produced print media to create complex compositions in the spirit of Surrealist and Dadaist collages. A selection of animation frames from VanDerBeek's films are also on display in the exhibition.