Danh Vo addresses the supposed attraction of the material values of the West. Products such as Coca Cola, as cited in his exhibition in cartons with gold-leaf-printed wrappings, also tempt and hold out a promise of salvation according to the artist. Conducting research at the Lesbian Herstory Archives (New York), Ulrike Muller found an inventory list of T-shirts present in the collection. The artist subsequently invited 100 internationally artists to translate into new pictures the lovingly detailed descriptions on the T-shirts. 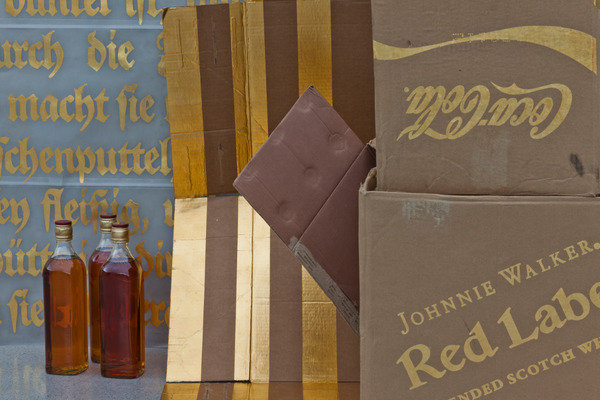 In his objects, installations, photographs, and works on paper Danh Võ combines personal experiences from his childhood in Vietnam with the story of his family, their flight to Europe, and questions of colonialism, migration, and cultural identity. A no less important topic of his works are same-sex relationships and, generally, a questioning of standardized patterns of behavior both in society in general and in the art context in particular. Over and over he succeeds in creating works of iconic power.

Danh Võ repeatedly draws on his own history and/or that of his family and involves close relatives in the production of his works, for instance his father Phụng Võ. Danh Võ’s installation at the last Berlin Biennale for example referenced his father. Here he presented in glass wall-cases the Rolex wristwatch his father bought from the gold left over from organizing the escape from Vietnam, the Dupont lighter bought with the first money he earned in his new homeland, and his signet ring. All three objects symbolize the yearning for the Western attributes of wealth, also their global range and presence.

It is not only in high-end consumer goods, however, that Danh Võ addresses the supposed attraction of the material values of the West. Products such as Coca Cola, as cited in his Bregenz exhibition in cartons with gold-leaf-printed wrappings, also tempt and hold out a promise of salvation according to the artist.

For Danh Võ, lettering, language, and work and exhibition titles have a significant role to play and add interpretative levels. This is true of his Bregenz exhibition: When Danh Võ and his parents were looking for his brother’s grave in a cemetery in Vietnam several years ago, he was profoundly shocked to read "Vô Danh" on a large number of the crosses and gravestones. This did not indicate the popularity of his name and a high mortality rate associated with it, though - in Vietnamese "Vô Danh" simply means "without name": those buried there were unidentified. So when Danh Võ calls his Bregenz exhibition, with ostensible self-referentiality, Vô Danh, he follows the custom of naming an exhibition - yet he also undermines it by calling the exhibition nameless.

A two-volume publication will accompany the exhibition as part of the catalog raisonné series published by the Kunsthaus Bregenz. One volume covers Danh Võ’s
compelling work in its entirety for the first time. A carefully compiled résumé of his projects and exhibitions will be supplemented by installation views and texts by Julie Ault, Yilmaz Dziewior, Doryun Chong, and Oscar Faria. The second volume pays homage to Danh Võ’s father Phu ng Võ and his contribution to his son’s projects as an independent work complex.

Ulrike Müller works with a wide range of media in different contexts. On the basis of conceptual practices she engages with the sociopolitical potential of artistic activity through drawing, painting, video, sound works, and performance. A central interest is her exploration of the ambivalences of contemporary gender constructions beyond binary categorizations of identity such as man/woman, hetero/homo.
Her project Herstory Inventory, being presented for the first time at the KUB Arena, dates back to when, conducting research at the Lesbian Herstory Archives (Brooklyn, New York), the artist found an inventory list of T-shirts present in the collection. Müller subsequently invited 100 internationally known artists to translate into new pictures the lovingly detailed descriptions of the pictures and graphic elements on the T-shirts written by a volunteer at the archives.
Against the backdrop of the history of the movement, drawing becomes an act of political engagement with the historical insignia, symbols, and positions of US lesbian feminist discourse. In a wide range of styles, formats, and problematizations, the pictorial translations of the texts enact personal attitudes toward historical feminist imagery, confronting them with their queer feminist rethinking. At the same time, the drawings by artists like Amy Sillman, Linda Bilda, Cristina Gómez Barrio, and R.H. Quaytman give insight into artistic strategies of representational politics and formal invention.

Ulrike Müller’s invitation to rethink images from the history of lesbian feminism turns the inventory of the Lesbian Herstory Archives into a source and reference point for a wealth of artistic designs. The process of appropriating, processing, and translating the source material into new drawings generates pictures that point to the mutability and oscillation of queer identities rather than solidifying into a closed pictorial representation. In her project’s presentation in the KUB Arena, individual and collective gestures interweave and challenge us to think creative action also in relation to sociopolitical issues.
After studying at the Academy of Fine Arts in Vienna, Ulrike Müller took part in the Whitney Independent Study Program (2002–2003) and the PS1 International Studio Program (2003–2004) and has since taught at various universities in the USA. In addition to her participation in numerous international exhibitions, she represented Austria at the Cairo Biennale in 2010 with a new series of enamel works.