In 'The origin of species', the artist's figure shows apparitional up - the ambivalence of emersion and dissolving depicts the duality of memory and neglect, taken as philosophic aspect of the evolution. The second series, Pinocchio, consists of 27 photographs in black-and-white. In addition, the films Time line - Linha do Tempo (2000) and Vasistas (2005). 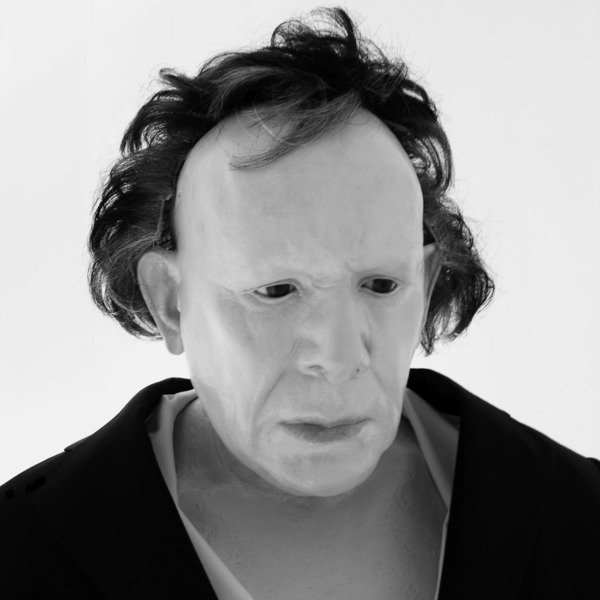 This season will be completed by the exhibition with photographic works of the Portuguese artist Jorge Molder, shown to the Berlin public for the first time.

Jorge Molder, born in 1947, lives in Lisbon, being one of the internationally well-known artists of his country. He joined the 22nd Biennale in São Paulo (1994) and the 48th in Venice (1999) and took with his photo tableaus part in several international exhibitions. In December 2010 Molder was awarded with the important Portuguese art award EDP/Arte 2010.

The most important theme in Jorge Molders work is the absurd metaphysics of everyday human life. Most often he exemplifies it in his own image. But these images are not 'self-portraits' in the common sense, the artist seems to be confronted to himself as a foreigner, staging him—as photographer and as photographed in one—performing gestures and disguise in front of the camera referring to manifold art-historian, cultural, philosophic, and scientific experiences.

Jorge Molder describes his method so: "I continued to use myself as a subject, but somehow I have been able to find, in this peculiar representation of myself, a character who is not entirely myself. Nonetheless, it cannot be anyone other than myself…"

Jorge Molder studied philosophy, his photographic thinking is not fixed to technical moments—not denying the sophisticated workmanship—but to a visual thinking in essential forms within photography, film and painting.

His recent series The Origin of Species – A Origem das Espécies (2011/12), shown for the first time here and naming our exhibition, can be considered as a résumé of former works. Before the black square, incunabulum of modernity, the artist's figure shows more or less apparitional up – the ambivalence of emersion and dissolving depicts the duality of memory and neglect, taken as philosophic aspect of the evolution.

The second series shown, Pinocchio (2006–2009), consists of 27 photographs in black-and-white, revealing the classical figure as a masked self-portrait. Molder interprets the dollish being as kind of a harlequin of inescapable presence, tangling the contemplator in a reflection of its own life—like in Watteau's well-known painting.

On the occasion of the exhibition, kindly supported by the Embassy of Portugal in Germany and the Instituto Camões , the publication JORGE MOLDER. The Origin of Species – A Origem das Espécies will be released.

THE ARTIST
Jorge Molder was born in Lisbon in 1947. After graduating in Philosophy from the Faculdade de Letras of the Universidade Clássica de Lisboa, he held his first exhibition of photographic work in 1977. Subsequently he has had numerous individual shows in Portugal and abroad. He has taken part in collective exhibitions, such as the 22nd Biennale of São Paulo (1994), the 48th Biennale of Venice (1999), the Schwarze Quadrat (Homage to Malevitch) at the Hamburger Kunsthalle (2007), Artempo – Where Time Becomes Art, at the Palazzo Fortuny in Venice (2007), Jan Fabre – Le Temps Emprunté, at the Palais des Beaux-arts in Brussels (2008), and L'interprétation des rêves, at the Centre Culturel Calouste Gulbenkian in Paris (2010).
He lives and works in Lisbon.
For more information please see www.jorgemolder.com