Houille! Killoffer shows a series of drawings on paper and on canvas, made in 2011 and 2012. He has wished Ruppert and Mulot to be invited, who will show, for the first time, a film entitled The Rite of Spring. 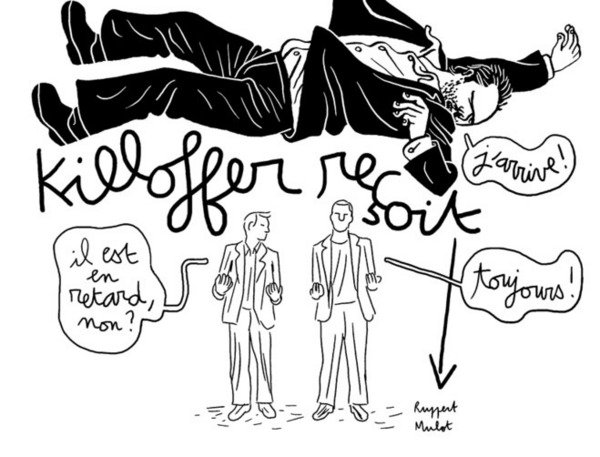 Following his late exhibition in Abbaye Sainte Croix museum in Les Sables d’Olonne, and the publication of his new book, Killoffer shows, in gallery Anne Barrault, a series of drawings on paper and on canvas, made in 2011 and 2012. He has wished Ruppert and Mulot to be invited, who will show, for the first time, a film entitled “the Rite of Spring”.

Killoffer suggests the possibility for our digestive and linguistic functions to have the same origin, and emphasizes the skin convulsions that suddenly rise under your affable languor. Often, your hypnotic, baroque, modern style, slowing down movements cause perceptive clutters alike the moonlike encroachments of certain Parisian streets. Sometimes, carried along, your course gives birth to a flow of constellations on the slanting surface of the paper sheet, ideas that spurt out like intellectual sperm. Here is the beginning of the world, the birth of planets, the aboriginal peoples, the archetypal animal.

There are so many Killoffers in you and around you. Why are there several Killoffers rather than one? Because he investigates how you feel about the Universe, in a way both well behaved and unruly. He has to split up and duplicate himself, to become, in turn, an experimental metaphysician, a patabiologist, or the surveyor of mad science, to tackle all the faces of your perception, not to give it any respite, to seize it when it is mere metamorphosis, when it changes shape. Killoffer calls up all its facets, which then become the adjuncts of his relentless inquiry about you. And if his comic strips are metaphysical and scatological, full of ceaseless questionings like flows of mental diarrhea, Killofer’s images are eschatological and cosmological, softly mineral, alternating shadows and geological forms. They let the original shapes of your fundamentally equivocal affects appear, that no discrimination will ever solve. Everything will always be ambiguous in your life; everything will always be reversible, steady one way and the other, carnivalesque, uncertain. It is unquestionably the victory over the duck rabbit world. Joseph Jastrow was right.

Killoffer’s drawings catch you when you surface from sleep. This sleep is scattered into rocky and plastic shapes, folds formed by the stone and the sculptures that rise right in the middle of the sheets. Then it is a parceled planet born in a misty dawn, seen on waking, from a window corner. And there are huge cosmic pants that you notice on the other side of the bed, like a specter upside-down. They are bewildered, starving, thirsty ghosts with wide opened mouths, which merge in the balaclavas hung in the displayed dirty linen next to the shower you are going to have to feel well. And there are face cloths, like plastic logs, which appear in a spotless bathroom, ready to jump on you, like mutant animals hidden behind a bush.

You are then in the most dangerous cosmos you can imagine. You recline limply in your sofa, and larvae or shortbread crescents shoot through its back. They are spectral wales in a stone sea, and slugs of sperm moving towards a hole, like baby whales. You look out of the window at night falling on your new day. Here are planets on which a torrential rain pours, like black milk gushing from udders. In the end, these ghost cows’ very udders become like the oozing sausages on the grill of tomorrow’s barbecue, because all the shapes are erratic and are found in opposite worlds, creating analogies between what should be left apart. And everywhere each rhinoceros horn of your gooseflesh screams with birth pain.

What is drawing in Killoffer’s cosmos and its disturbing logic? To draw is to find the beginning of things and its excremental, symphonic equivocation. It is to draw lines that can mean several things in one word, to create a being by dissociation, causing such a disconnection that it will swallow the well-known universe through an overflow of affects. To draw is to quicken the end of this cycle of expression, and lay the cosmogonical, anarchic, alchemic foundations of the next one. To draw would be to be born, really born. Till then, you were in the dark, and we were talking about universal destruction.

This text is published in Killofer’s last book “Charbons”, L’Association.

Florent Ruppert and Jérôme Mulot were born the former in 1979, the latter in 1981. They met at a barbecue at Dijon Art College in 1999. The two friends work together drawing as well as writing the scenarios of their comic strips that endeavor to depict absurd situations both funny and strange.

Photographers wonder about the origin of the scars on the face of a depressive boomerang champion, black slaves, out of revenge, pat their masters’ cloaks with their penises, enemies fight a duel in the middle of the yearly meeting of sword swallowers… Killoffer introduced Ruppert and Mulot to l’Association , a publishing house, in 2005, and their second book, Panier de singe, won an award at Angoulême festival in 2007.

In 2008, both authors, at the same time as publishing with their publisher, start developing a new kind of comic strips they take out of their usual field: the book. They tell stories through exhibitions of drawings, installations, lectures, living sculptures telling, for example, how an audition goes when actors wearing masks must play the part of a drunkard in a show for Swiss Alcoholics Anonymous.