'Do not walk outside this area' is the artist project conceived specifically for his 'Artist of the Year' exhibition at the Deutsche Guggenheim. The path through the installation leads via the original wing of a Boeing 737-500, which enjoins two exhibition rooms like a bridge. In both rooms, works on paper and installations are devoted to the theme of 'travel'. With his installations, performances and drowings, the Slovakian artist investigates the borders between art and everyday life. 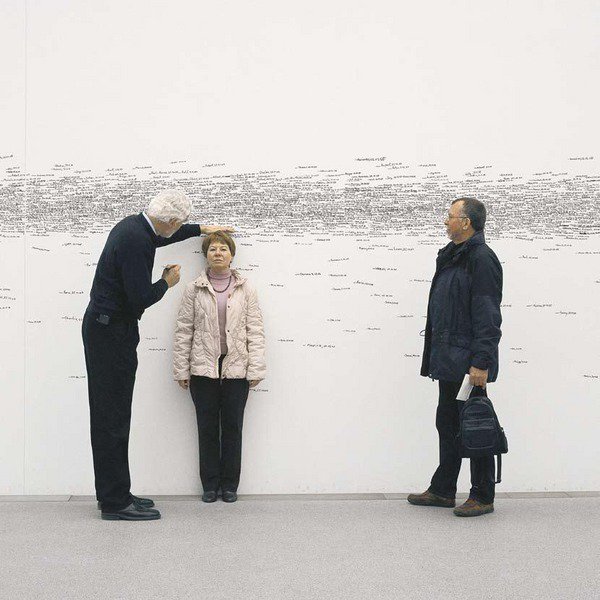 The basis for his subtle, sharp-witted works is paper—the medium on which he drafts and documents his projects. Ondák’s art occurs in various places, be they museums and galleries, art biennials or art fairs, streets or his home environment. He uses found situations, but changes or stages them such that expectations and conventions begin to totter.

Travelling, moving through space and time, is a continuous theme in Ondák’s work. This is the case in do not walk outside this area, a project the artist conceived specifically for his “Artist of the Year” exhibition at the Deutsche Guggenheim. The path through the installation leads via the original wing of a Boeing 737-500, which enjoins two exhibition rooms like a bridge. In both rooms, works on paper and installations are devoted to the theme of “travel”. One of them is Balancing at the Toe of the Boot, 2010, a series of seven postcards and sixteen fictional newspaper articles based on a trip to Calabria. To reach the second part of the exhibition, the visitor walks over the wing in the area marked: “Do not walk outside this area,” entering the unreachable surface that otherwise can only be seen out of the window of an aircraft cabin.

Ondák not only plays with a reversal of inside and outside, but also with the conventions of the art industry. Everyone knows the prohibitions, barriers, and boundaries that lend artworks a valuable, exclusive aura and thus fetishize them: Please do not touch! Do not come too close. No photographs. But Ondák’s wing is not a hallowed sculpture. It is an object of use that we are supposed to enter and touch. This footbridge serves as a runway for our ideas, memories, and fantasies. In the age of global mobility, Ondák invites us to take an inner, imaginary journey.

After Wangechi Mutu (2010) and Yto Barrada (2011), Roman Ondák is the Deutsche Bank “Artist of the Year” for 2012. On the recommendation of the Deutsche Bank Global Art Advisory Council, consisting of the renowned curators Okwui Enwezor, Hou Hanru, Udo Kittelmann and Nancy Spector, the bank honors contemporary artists who have created an extraordinary oeuvre in which works on paper or photography play an important role.


Artist of the Year 2012
A focus on young art: like its corporate collection, Deutsche Bank’s award, the “Artist of the Year,” is committed to the present. The aim is to acquaint a wide public with new and exciting artistic positions. Based on a recommendation by Deutsche Bank’s Global Art Advisory Council, which includes internationally renowned curators Okwui Enwezor, Hou Hanru, Udo Kittelmann, and Nancy Spector, the bank honors an auspicious artist who has already amassed an unmistakable and extraordinary oeuvre that concentrates on the two focal points of the Deutsche Bank Collection: works on paper and photography. This year the prize is being awarded for the third time. The “Artist of the Year 2012” is Roman Ondák.

The award is not based on a financial reward, but is positioned as an integral part of Deutsche Bank’s art program that has been opening up the world of contemporary art to the public for the last thirty years – through Deutsche Bank’s own substantial collection, its exhibitions, and its joint projects with partners. The “Artist of the Year” is featured in a solo exhibition at the Deutsche Guggenheim in Berlin, and the exhibition subsequently moves on to other international institutions. An exclusive edition designed by the artist and a catalog will appear concurrently with the exhibition. In addition, on this occasion a selection of the artist’s works on paper will be acquired for the Deutsche Bank Collection.