Through the Looking Glass. The artist, representative of the inaugural UAE Pavilion during the 2009 Venice Biennale, unveils a new body of work that addresses societal notions of beauty, intimate perceptions of self and identity through a portrait series. 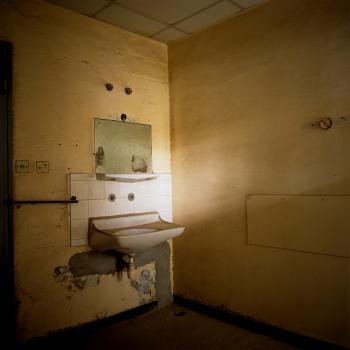 Lamya Gargash, representative of the inaugural UAE Pavilion during the 2009 Venice Biennale, unveils a new body of work that addresses societal notions of beauty, intimate perceptions of self and identity through a portrait series at The Third Line. Influenced by such artists as Cindy Sherman, the photographs aspire to raise challenging and important questions about self-reflection and criticism in relevance to media representation of body image and beauty standards in today's society.

Through the Looking Glass investigates how we constantly view ourselves in comparison to an ever-elusive standard, prompted by the constant bombardment of media imagery dictating 'how we should look.' Minor defects become drastic, resulting in even more drastic measures undertaken to reach that ideal standard of beauty. Our self-perception, and subsequently our identity, becomes indistinct; as if viewing ourselves through a distorted looking glass.

The photographic series comprises of diptychs, with one panel depicting a portrait of the subject as seen by the world, and an opposing panel depicting the subject as seen through their mind's eye. The project which has taken close to two years to complete, was facilitated by the use of artificial prosthetics; slight imperfections, which are accentuated and most times magnified, to a scale equivalent to that haunting mental image of self-judgment. The viewer is allowed into the photographed subject's subconscious, sharing their most confidential vulnerabilities and insecurities.

According to Gargash this exhibition is "an extension of constant self-critique and perpetual state of anxiousness over attaining perfection." The works reveal the classic social paradox of seeking ideal beauty: we are all troubled by it, yet still constantly judge each other. As such, Gargash chose everyday people as her photographed models to evoke a collective and humanitarian sentiment; an invitation to raise awareness and accept ourselves, and each other, the way we are.

About Lamya Gargash
Concerned with the extensive study of self, identity and perception, Lamya Gargash documents the forgotten spaces in public and private realms in Emirati society, and more recently has begun investigating the fragility of human nature from a psychological angle. Throughout her career Gargash has won a number of awards for her work in film and photography. Gargash participated in the 53rd Venice Biennale (2009) as the featured artist of the UAE's first ever national pavilion. Presenting her new series Familial, Gargash exhibited photographs taken across the UAE that visually play with the notion of hospitality and the politics of interior design.   In 2004, Gargash received first prize in the Emirates Film Festival, as well as Ibdaa Special Jury Award for her movie titled, Wet Tiles. Gargash's first artist book entitled Presence is a photographic series, which documents recently vacated houses and structures in the United Arab Emirates that have been abandoned or left for demolition. Gargash currently lives and works in Dubai.

This project was possible thanks to the generous funding by Emirates Foundation.