In the three films exhibited (Arbeit, Make it New John and Bernadette), brought together for the first time, the Glasgow-based artist combines archival material with his own footage, ostensibly 'authentic' documents with fictitious elements. 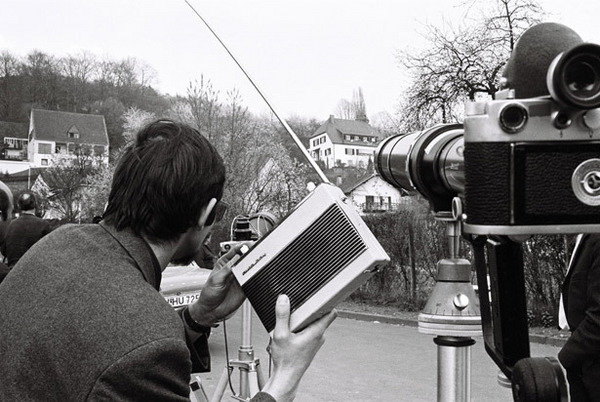 Pittsburgh, Pennsylvania…Carnegie Museum of Art presents the most comprehensive exhibition to date of works by acclaimed artist-filmmaker Duncan Campbell (b. 1972, Dublin). The Glasgow-based artist’s recent films push the boundaries between the actual and the artful in historical narrative and media representation. Duncan Campbell includes three of Campbell’s films–Arbeit, Make it New John, and Bernadette – brought together here for the first time, as well as new screen prints created for the walls adjacent to the museum’s Forum Gallery, the largest and most ambitious prints the artist has created to date.

In the three films exhibited in Duncan Campbell, the artist combines archival material with his own footage, ostensibly “authentic” documents with fictitious elements, to craft engaging portraits of three people who directly or indirectly affected his homeland of Ireland. Captivating in their specificity, their stories also resonate with recent world events. The films will play sequentially, and each sequence of three films will show three times daily. Program schedules are available in the museum.

Campbell’s most recent film, Arbeit (2011, 39 min), takes as its subject Hans Tietmeyer, a German economist who played an important role in the centralization of the European financial system, which has caused profound turbulence in Ireland’s economy. Make it New John (2009, 50 min) looks at troubled American automobile engineer and mogul John DeLorean and his iconic DMC12 car, the construction of which was an important economic factor in West Belfast. Bernadette (2008, 37 min) focuses on Bernadette Devlin, the controversial Irish republican MP who served during the start of the Irish “Troubles” in the late 1960s and early ’70s.

“Campbell’s films are based in immense amounts of research and a sincere desire to understand the past,” says Amanda Donnan, curatorial assistant for contemporary art, who makes her Carnegie Museum of Art curatorial debut with Duncan Campbell. “But they acknowledge the contradictions and limitations of that endeavor, and challenge viewers to consider what they know and how. They are fascinating films that transform archival material into something wholly the artist’s own.”

Punctuated with incongruous sounds, desynchronized audio overlays, and animated elements, Campbell’s films reveal the artist’s hand in their creation, denouncing documentary’s claim to objective representation. In each, Campbell positions himself as the undependable storyteller, filtering history through the lens of personal interpretation and examining consequential episodes—such as Ireland’s Troubles and the decade following the fall of the Berlin Wall—through images of or around a principal actor. His attention to the details, to the margins rather than to the central “facts” of his subjects’ stories, suggests that navigating the vast expanses of an archive can be disorienting as well as enlightening.
About the Artist

Duncan Campbell was born in Dublin, Republic of Ireland, in 1972. He earned his BA at the University of Ulster, Belfast, and his MFA at Glasgow School of Art in Glasgow, Scotland, where he resides today. Campbell works primarily in film and video but also founded with Alex Frost and Mark Vernon the artist-run radio station “Radio Tuesday.” His interest in the problematics of communication have carried over to his documentary films, such as his breakthrough work of 2003, Falls Burns Malone Fiddles, a film comprised of found photographs of people in Belfast during the Troubles combined with a voiceover in a nearly indecipherable Scottish accent, as well as 2006 tribute to Samuel Beckett o joan, no… –a film comprised largely of darkness and punctuations of light—and 2008’s Sigmar, an imaginary encounter between Campbell and German artist Sigmar Polke.

Programs
Artist Lecture and Opening Reception
Thursday, April 27, 6 p.m.; Galleries open until 9 p.m.
CMA Theater and Forum Gallery; Free
Reception with cash bar follows.
Duncan Campbell discusses his work and that of structural filmmakers and other artists who have influenced him.