When the dreamer dies, what happens to the dream? Though Calzolari calls himself a sculptor, he could also be called an alchemist, a poet, and a philosopher. But the artist may best be described as an activator-an activator of materials, senses and environments who seeks to "contaminate" art with life. 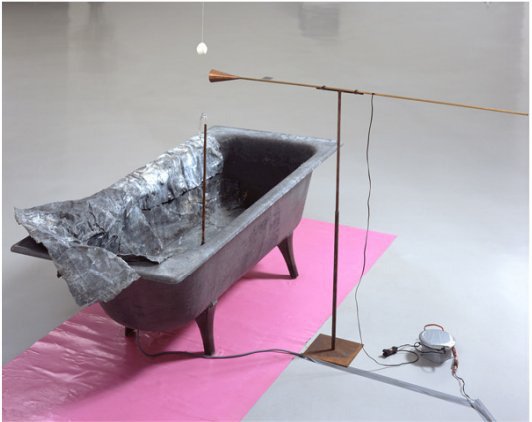 The Pace Gallery and Marianne Boesky Gallery are pleased to present, When the dreamer dies, what happens to the dream? an historic exhibition of the work of Pier Paolo Calzolari. For this unique collaborative presentation, the two galleries’ spaces on 24th and 25th Street, respectively, will be temporarily conjoined to form one large space where Calzolari’s work can be presented in depth. A member of the Arte Povera group, his 1969 text “La casa ideale,” and its realization through a series of works, is considered one of the seminal statements of the movement. Rapidly evolving beyond the confines of a defined movement, over the subsequent decades Calzolari continued to experiment, exploring his ongoing interest in light, matter and time. A major exhibition of his work was held at the Galleria Internazionale d’Arte Moderna at Ca’ Pesaro, Venice during the 2011 Biennale. This will be the artist’s first solo exhibition in New York since 1988 and will focus primarily on work created in the last 25 years.

Though Calzolari calls himself a sculptor, he could also be called an alchemist, a poet, and a philosopher. But the artist may best be described as an activator—an activator of materials, senses and environments who seeks to “contaminate” art with life. His toolbox is elemental and frequently organic, including frost, fire, water, salt, lead, copper, neon, tobacco, moss, burnt wood, feathers, wax, butter, and plant leaves. In his installations, Calzolari transmutes these materials, oftentimes fixing them in ephemeral states, suspending matter in a transfiguration that envelops and inundates the viewers’ senses. Performance is also an integral aspect of Calzolari’s practice; he created happenings as early as 1966, drawing viewers into his artwork as performers in what he termed “an activation of space.”

The position of the artist is an implicit theme in Calzolari’s work as he examines the ideas of experience versus expression, with experience defined both autobiographically and through viewer perception. For Calzolari, the perfect white—the very “essence” of white—cannot be recreated as pigment. Rather, it exists only in nature in the form of frost. This realization arose from his youthful observation of light reflecting off white marble in Venice and led to his continued fascination with frost and its ability to regenerate. An investigation of and display of time passing recurs in his installations, often via the incorporation of melting or freezing elements. Through the means of technology—a refrigerator motor—Calzolari is able to suspend this fragile state, creating works that emit a familiar low hum, infusing the air with the crisp smell of snow and a perceived chill. There is a palpable impulse for the viewer to touch the work, to verify that it is indeed ice. Calzolari’s preoccupation with light extends to works involving albino animals, including a white koi swimming in a large tank, at once representing grace and anomaly. Suffused with collective history and individual memory, the hermetic and the vulgate, rumblings and poetry, songs and silence, signs and gestures, the organic and the inorganic, Calzolari’s works breathe, yet are suspended as still life, transfixed in an infinite dialogue of man “with matter, with objects, with animals.”[i]

A catalogue published by Abrams with texts by Germano Celant, Massimiliano Gioni, and the artist will accompany the exhibition.