A Retrospective of Perspectives from Selected Eclected - 9 Years Party Party. Kunstraum presents a wide range of artists who adorned the club nights with their works over the years. 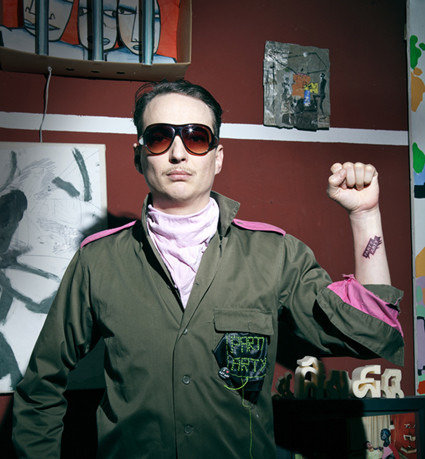 Celebrating the 9th anniversary of the PARTY ARTY series, Kunstraum Kreuzberg/Bethanian presents a wide range of artists who adorned the club nights with their works over the years.

Over the last nine years, the club series PARTY ARTY has united and staged fine art, music and literature parallel to wild parties. The curators had no interest in whether the artists originated from the 'Urban Art' context or had an academic background, whether the DJs and bands played Hip-Hop or Electro and whether spoken word artists delivered poetry or short stories: „Art first of all depends on attitude!“, declares PARTY ARTY dictator Yaneq dogmatically. „Art is not democratic - art is a dictatorship and I am dictator here! “ This basically means that he invites anyone he pleases.

„Art in life – life in art “- quoting the show’s subheading – imbue the rooms of Kunstraum Kreuzberg/Bethaniens though not only with fine art: throughout the duration of the exhibition, musicians and DJs from the ‘Party Arty Army’ (the collective name for all those who have contributed something to the PA) will play concerts and sessions, and besides a large Spoken Word event for ‘Lange Buchnacht’ (Book night), there will also be several readings and performances, film evenings as well as other content.

Following the order to include art in life and bring life to art, two of the showrooms at Kunstraum Kreuzberg/Bethanien will be converted into a doppelganger of Yaneqs apartment, in order to give his collection its own stage. This collection, more a conglomerate of different artistic works bequeathed to the dictator by the artists over the years, is the substrate of nine years curatorial practice and thus an important point of reference.
Yaneq and the video artist Anina Brisolla will live and work for seven weeks in this apartment for the duration of the exhibition. Thus they bring actual 'life' to the exhibition, that is the primary result of the combination of art and life.

A further area is reserved for the ‘Party Arty Stipendiaty‘: A 24 hours scholarship for international artists, which in addition to a residency in the exhibition, offers the chance to redesign the space itself.

Everyone can apply. As part of a daily ritual at 5 pm, the stipend holders hand over the key to the room. Starting its existence in Friedrichshain in a small, fine club called Lovelite, PARTY ARTY has since resided in the cellar of Festsaal Kreuzberg, Club 103, various off-spaces and finally settled in Ritter Butzke, becoming a firm fixture in the nightlife of Berlin. Work of almost 100 contemporary artists have been shown, likewise as many DJs and bands have played and almost 50 poets have seized the microphone. Taz newspaper donned the series „cult status“, and the Berliner Zeitung declared it was „pioneering work “in all things club and art.

PARTY ARTY will be 9 years old. Why celebrate 10 years, especially if you are interested in numerology? 10 is only a 1 and a 0, binary and thus purely factual information. 9 however is magical, perfect and round and is always recurrent: 9 times 9 is 81, the sum of those two digits equals 9. 9 plus 9 is 18, 3 times 9 is 27 and so on. This is why the major retrospective in the Kunstraum Kreuzberg / Bethanien was organized for this year. The current work of many