Three Decades is the first exhibition of works by the British artist Victor Burgin. The conceptual artist, after a decade dedicated to photography, at the beginning of the 1990s he turned to digital video. On show also will be showing a new neon work by Chilean artist Alfredo Jaar in the gallery's Corner Space. 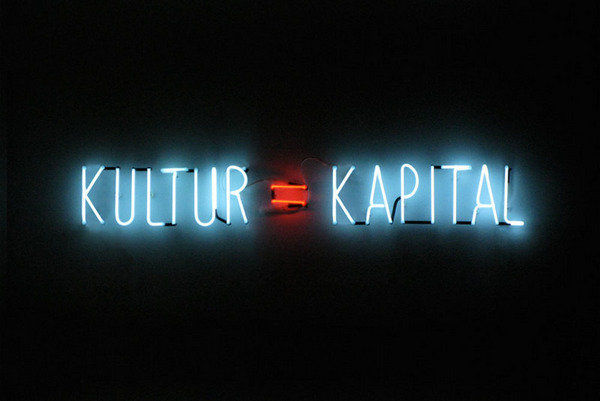 On Friday 27 April 2012, Galerie Thomas Schulte will open ‘Three decades’, its first exhibition of works by the British artist Victor Burgin.
Victor Burgin first came to prominence in the late 1960s as an originator of Conceptual Art, when his work appeared in such key exhibitions as ‘Live in Your Head: When Attitudes Become Form’ (1969) and ‘Information’ (1970). From the 1970s his work consisted mainly of photographic sequences, with printed texts juxtaposed with the image. At the beginning of the 1990s he turned to digital video, but video from the point-of-view of photography – seen, for example, in his concern with the relation between stasis and movement – and most recently he has worked with 3D computer modelling. However, as the art historian Stephen Bann observes: ‘this progressive exploitation of new technologies is itself fairly uninteresting compared with the remarkable consistency of the underlying themes and propositions of his work’. (Stephen Bann, ‘Victor Burgin’s Critical Topography’, in Relocating, Bristol, Arnolfini, 2002).

The exhibition opens with Burgin’s work of 1972 Performative-Narrative, where he first introduces the element of narration that has characterised his work ever since. The hermeticism of early conceptualism is nevertheless evident in the rigorously recursive formal structure of this piece. Burgin’s narrative turn soon brought politics into his consideration. In his post-conceptual works up to 1976 – perhaps best exemplified in his street posters from this period – politics is defined mainly in Marxian terms of economic class. The influence of the women’s movement subsequently led him to engage with the politics of gender. From the late 1970s into the 1990s his attention shifted from gender issues to questions of sexuality as he combined socio-political insights with those offered by psychoanalysis.

For example, his work of 1978 Zoo 78 (the centre-piece of this exhibition) brings together themes of the society of surveillance (Michel Foucault’s ‘panopticon society’) with scenarios of the sexually-invested drive to master through looking. Burgin’s 1982 work Gradiva, from his ‘Tales from Freud’ series, is a laconic evocation of Freud’s 1907 commentary on Wilhelm Jensen’s 1903 novella. A mise-en-scène of sexual misrecognition, this work also represents a further stage in Burgin’s elaboration of narrative forms specifically adapted to the gallery wall (for example, his lapidary paragraphs may be read not only from left-to-right, but from each extremity to the centre).

Burgin’s early video piece Love Stories #2 (1996) returns to the theme of ‘desiring through substitutes’ central to Gradiva, but now played out in minimal scenarios from Hollywood cinema: a woman is attracted to a man because he reminds her of her father; a man is attracted to a woman because she reminds him of another woman; a woman despairs at her inability to match the perfection of her own ideal self. The philosopher Henri Bergson notes: ‘Perception is never a simple contact of the mind with the object present; it is completely impregnated with memory-images which complete and interpret it.’ This is perhaps the most consistent of the underlying propositions in Burgin’s work, which constantly asserts the primacy of the space between the viewer and the perceptual world – a space in which the ‘image’ is a virtual entity produced by the refraction of material reality through the prisms of narrative, memory and fantasy.

In the context of this year’s Gallery Weekend Berlin, parallel to its exhibition of works by British concept artist Victor Burgin, Galerie Thomas Schulte will be showing a new neon work by Chilean artist Alfredo Jaar in the gal-lery’s Corner Space, from 27 April 2012. The artist will be in attendance at the opening.

Alfredo Jaar makes far-reaching connections in his works be-tween the levels of ethics and aesthetics. Jaar frequently works with quasi-documentary images, which he presents in light boxes and which engage with the discrepancy between First and Third World and its presentation in the media. The archi-tecture and spatial setting are also of great importance to the artist. In his installations, Jaar constantly explores the most varied image and text combinations, thereby sounding the depths of social phenomena. His neon lettering works also testify to this. The forceful, glaring lettering immediately draw the viewer’s attention, inviting him to reflect on their complex meaning.

The lettering in his latest work, Kultur = Kapital, makes reference to Joseph Beuys’ claim “kunst = kapital”. Throughout his oeuvre, Beuys repeatedly engaged with the issue of how art co-shaped society and politics, and was of the opinion that the creativity of each individual person represented the capital, and with it also the potential, of a society. Ultimately, Beuys condensed his complex theories in a formulaic equation that, in the form of multiples, became the bearer of his ideas.

Jaar’s neon work broadens the citation to include the concept of culture. Both concepts are inseparably linked by the equal sign and are mutually dependent. Within a social model, capital supports culture, while, vice versa, culture should be an essential part of our social capital. Particularly in times of financial crisis, when ever larger savings are being made in the culture budget, Jaar would like to point out that culture represents a society’s true capital.

In addition to his allusion to Joseph Beuys, Jaar also references his own installation The Marx Lounge, implemented for the first time within the framework of the 2010 Liverpool Bi-ennial and subsequently exhibited in 2011 at the Stedelijk Mu-seum Amsterdam and the Centro Andaluz de Arte Contemporaneo in Seville. For that work Jaar filled a reading room exclusively with writings by Karl Marx and other authors who, today, still question the capitalist system.

In presenting Alfredo Jaar’s installation Kultur = Kapital in such a prominent place, namely, its high-ceilinged Corner Space, Galerie Thomas Schulte is providing a first pointer to the first Germany-wide retrospective show of this artist’s works. Beginning in Berlin on 15 June, until 17 September 2012, works by Jaar will be exhibited at various institutions, including the NGBK Neue Gesellschaft für Bildende Kunst, the Alte Natio-nalgalerie and the Berlinische Galerie.