The Belgian artist David Claerbout works primarily with time-based media such as animation, video and sound as well as photography. Stephan Dillemuth experimental artistic means always also call his research in question, generating new insight. Slavs and Tatars is a faction of polemics and intimacies devoted to an area east of the former Berlin Wall and west of the Great Wall of China known as Eurasia. 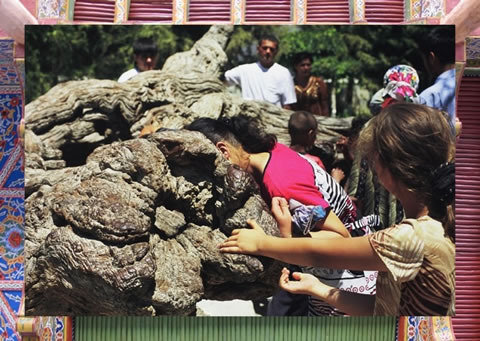 The Belgian artist David Claerbout works primarily with time-based media such as animation, video and sound as well as photography. His contemplative projections trace back the characteristics of these former autonomous media on the brink of disintegration. The works deliberately require tranquility and patience, often employing parallel arrangements like motion versus standstill, duration versus moment, evanescence and change versus permanence and continuity. In his first solo show in Austria, David Claerbout will present a selection of works, most of them recent. Diese Sonne strahlt immer refers to electric light as a replacement for sunlight. Claerbout is fascinated by how human perception will interpret footage that is filmed directly against the sun as ‘intense’, while being a feeble projected light beam reflected on an ordinary white wall. His works seem to regret the loss of sensorial experience and yet his subjects include natural phenomena like reflection, wind and sunlight.

His early media-critical video works are based on appropriated photographs, e.g. Kindergarten Antonio Sant’Elia, 1932 (1998) while recent fictional films take the concept of the simultaneity of antagonisms a step further; the narrative recedes into the background as natural phenomena that elude deliberate control, such as the sunlight, become the real-time protagonists (see the thirteen-hour Bordeaux Piece, 2004). To immerse themselves in Claerbout’s work, viewers accordingly need one thing above all else: plenty of time.

David Claerbout, who was born in Kortrijk (BE) in 1969, lives and works in Antwerp (BE) and Berlin (DE).
The exhibition David Clearbout is a cooperation with the government of Flanders.

Stephan Dillemuth believes that his possibilities as a visual artist must be conceived in light of the ongoing transformation of the modern public sphere. In thinking about his own role and what he can do with his art, he examines questions such as: to which extent can self-organization and personal and collective integrity be established within the framework of our society of control? With its inherent methods of reflection, analysis, and experimentation, art, he believes, creates beauty, but it also has the potential to change society.

In order to review contemporary issues, Dillemuth sometimes studies historic movements (such as the Lebensreform movement or alternative attempts at social renewal of the 1970s) and situations of social transformation (such as the Munich Soviet Republic of 1918–19), but his experimental artistic means always also call his research in question, generating new insight. The results of these experiments include installations, theatrical performances, and collaborative works as well as videos, lectures, and publications.

Stephan Dillemuth, who was born in Büdingen (DE), lives and works in Munich (DE).
www.societyofcontrol.com/

Slavs and Tatars is a faction of polemics and intimacies devoted to an area east of the former Berlin Wall and west of the Great Wall of China known as Eurasia. The collective’s work spans several media, disciplines, and a broad spectrum of cultural registers (high and low). Slavs and Tatars has published Kidnapping Mountains (Book Works, 2009), Love Me, Love Me Not: Changed Names (onestar press, 2010), and Molla Nasreddin: the magazine that would've, could've, should've (JRP-Ringier, 2011). Their work has been exhibited at Salt, Istanbul, Tate Modern, the 10th Sharjah, 8th Mercosul, and 3rd Thessaloniki Biennials. After devoting the past five years primarily to two cycles of work, namely, a celebration of complexity in the Caucasus (Kidnapping Mountains, Molla Nasreddin, Hymns of No Resistance) and the unlikely heritage between Poland and Iran (em>Friendship of Nations: Polish Shi'ite Showbiz, 79.89.09, A Monobrow Manifesto), Slavs and Tatars have begun work on their third cycle, The Faculty of Substitution, on mystical protest and the revolutionary role of the sacred and syncretic. The new cycle of work includes contributions to group exhibitions– Reverse Joy at the GfZK, Leipzig, PrayWay at the New Museum Triennial and Régions d’Être at the Asia Pacific Triennial–as well as solo engagements with Not Moscow Not Mecca at the Secession, Vienna, Khhhhhhh at Moravian Gallery, Brno, Beyonsense at MoMA, NY and Künstlerhaus Stuttgart.

Slavs and Tatars is a collective founded in 2006.