Taking its title from Lawrence Weiner's 1970 text-based piece, 'An accumulation of information taken from here to there' show highlights a generation of American and European artists who rejected traditional aesthetics in favor of new forms and procedures. Works by Andre, Anselmo, Boetti, Dibbets, Gilbert & George and many more. 'Artists Including Me' is a solo exhibition by William Wegman of recent postcard paintings that features imagery from secondhand souvenirs, imaginary landscapes, and art about art. 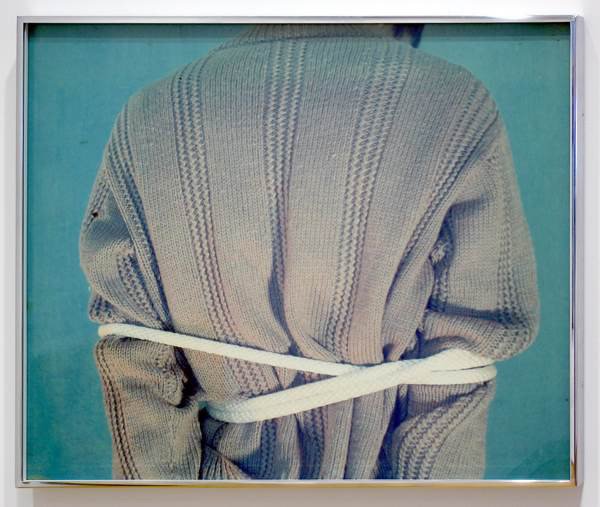 AN ACCUMULATION OF INFORMATION TAKEN FROM HERE TO THERE

New York, NY: - Sperone Westwater is pleased to present, AN ACCUMULATION OF INFORMATION TAKEN FROM HERE TO THERE, a group exhibition focused on works from the late 1960s to early 1970s. Taking its title from Lawrence Weiner’s 1970 text-based piece, the show highlights a generation of American and European artists who rejected traditional aesthetics in favor of new forms and procedures. Included are key Arte Povera, Minimalist, and Conceptual works that emphasize materials and process, as well as the reconstruction of language. The artists represented were championed by Sperone Westwater early on in their careers and have been prominently featured in the gallery’s forty-year exhibition history.

Alighiero Boetti’s Ononimo (1973) consists of a progression of eleven separate paper panels, each hand-colored in blue ballpoint ink. Boetti's “biro” works were systematically colored by others, yet always based on a code or playful schematic system designed by the artist. In this piece, Boetti addresses the nature of identity and authorship by conflating two similar sounding words with opposite meanings: “anonimo,” which means anonymous, and “omonimo,” which means having the same name. In Senza titolo (1972), Boetti arranges 37 envelopes that were mailed to Gian Enzo Sperone, each with different combinations of colored postage stamps. In Giulio Paolini’s Lo Spazio (1967), pieces of plainly-painted wood are installed on the walls; the surrounding space becomes a part of his work. Mario Merz combines art and nature in Untitled (A Real Sum is a Sum of People) (1971), an installation of eleven gelatin silver prints and neon tubing. This sequence of photographs depicts an ever-increasing number of people sitting in a restaurant, with neon numbers above, following the Fibonacci series – a system of growth, often seen in nature, which perpetuates itself by adding the two previous elements to arrive at the next.

Weiner challenges the definition and nature of the art object in his text work, AN ACCUMULATION OF INFORMATION TAKEN FROM HERE TO THERE (1970), which is installed directly on the wall. Bruce Nauman incorporates linguistic play in his early photograph, Bound to Fail from the portfolio “Eleven Color Photographs” (1967-69), which depicts the artist’s body seen from behind and tightly bound with rope. In Photo Under Water (1971), William Wegman stages a scenario for the camera as he uses an existing self-portrait photograph as his object. This photograph is laid in a shallow developing tray and set in a sink under a running faucet. Wegman appears to be “developing himself”. Bridging art and life, Gilbert & George are the subjects and objects of Photo-Piece (1971), an installation of photographs of themselves in nature interspersed with images of a forest. Richard Long documents his travels on a topological map and explores the relationships between time, distance, geography, measurement, and movement in the collage, 5 fifteen minutes even walks on Dartmoor, Moorland, Marsh, Woods, Road, 27 March 1971 (1971).

Subverting traditional methods of artistic production, Carl Andre’s Minimalist sculpture, Aluminum Cardinals (1972) consists of industrial metal plates placed on the gallery floor in a sequence from 1 to 11. Also included in the exhibition is a 10-part work on paper Names (1964). For this opera, three lines of words from three different US military charts and maps are structured somewhat alphabetically over 50 bars. The resulting lines are meant to be read aloud in unison. On Kawara’s I am still alive (1987) consists of five telegrams addressed to friends with that same message; in a way, the artist is verifying his own existence.

This exhibition also includes a 1965 neon sculpture by Joseph Kosuth; a neon and cement sculpture from 1967-69 by Giovanni Anselmo; a 1970 Alternative Piece by Douglas Huebler; a 1959-60 Achrome by Piero Manzoni; and a 1969 photograph by Jan Dibbets.

William Wegman
Artists Including Me

New York, NY: - Sperone Westwater is pleased to present Artists Including Me, a solo exhibition by William Wegman of recent postcard paintings that feature imagery from secondhand souvenirs, imaginary landscapes, and art about art. This is the artist’s fifth solo show at the gallery.

Mounting found postcards from his vast personal collection onto wooden panels, Wegman enhances and embellishes a detail from one card and seamlessly connects it to the next with rich painterly strokes. He weaves in and out of each found image to create unique and dreamlike environments and ecosystems. Countries, epochs, and cultures collide, and the joys of exploration and travel are evident.

In the painting Artists Including Me (2012), Wegman depicts a museum storage space with works from time periods and movements ranging from Medieval to Pop Art to the present, including one of the artist’s own Weimaraner Polaroid photographs. In his major four-panel postcard painting I Kandinsky (2012), the artist explores figuration and abstraction through vivid colors, lines, curves, and a planar composition, as if in an homage to Kandinsky. In Location Vacation (2011), the central figures are reproduced from adjacent vintage postcards, evoking a sense of world travel with references to popular destinations.

Present in Wegman’s work is a smart, gently subversive humor that adds a transformative dimension to what can first appear to be a simple visual statement. Curator Joan Simon has described the artist’s oeuvre:

In his person and personas, Wegman is the artist who takes familiar things into new territories of context and meaning through relentless work, a good bit of dreaming, and some strange and contrarian reversals. […] He works between daily pragmatic realities and out-of-time reveries that come from the most unexpected places.

This summer, the Bowdoin College Museum of Art will also present William Wegman: Hello Nature, a major survey of over 100 Maine-inspired works by Wegman in various media. The exhibition will be on view from 13 July through 21 October 2012 and will be accompanied by an extensive illustrated catalogue Hello Nature: How to Draw, Paint, Cook and Find Your Way by William Wegman.

Born in Holyoke, Massachusetts, in 1943, Wegman received a BFA from the Massachusetts College of Art, Boston and an MFA from the University of Illinois, Urbana-Champaign. His work has been exhibited extensively both in the United States and abroad, including solo exhibitions at the Walker Art Center, Minneapolis (1982); San Francisco Museum of Modern Art (1988); Whitney Museum of American Art (1992); Museum of Fine Arts, Boston (2001); and The Art Gallery of Ontario, Toronto (2002). The traveling retrospective William Wegman: Funney/Strange was recently held at the Brooklyn Museum; the Smithsonian American Art Museum, Washington, D.C.; the Norton Museum of Art, Palm Beach, FL; the Addison Gallery of American Art, Andover, MA; and Wexner Center for the Arts, Columbus, OH (2006-2007).

An opening reception for William Wegman will be held at the gallery on 4 May from 6 - 8 pm.