Futurism, Abstraction, Concrete Art, a group exhibition of influential Italian painters working before, during and after World War II. Vigo's Cronotopi and her dedication to light as medium were instrumental in developing the artist's affiliation with the Zero group. 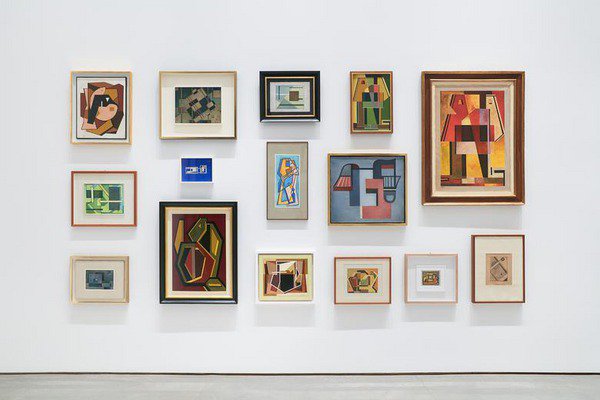 Sperone Westwater is pleased to present Painting in Italy 1910s-1950s: Futurism, Abstraction, Concrete Art, a group exhibition of influential Italian painters working before, during and after World War II, curated by Gian Enzo Sperone. Featuring over 120 paintings spanning three major artistic movements, the exhibition illustrates the diversity and singularity of abstract art in Italy, seeking to afford more focused attention to a group of artists who revolutionized the historical sweep of painting in the context of interwar and postwar Europe and the United States.

This exhibition concerns three periods from the early 1910s through the late 1950s, beginning with Giacomo Balla and Enrico Prampolini’s embrace of the Futurist manifesto and charting the development of Italian abstract painting under the growing political pressures of Fascism. The works on view are united in their vigorous challenge of the traditions of their time, each propelled by spirited experimentation and fervent revolutionary impulse. Often transcending the typical Futurist subject matter of racing car and mechanical city-scape, these works mark a distinct movement away from figuration as the primary vessel for an expression of feeling, instead investigating the emotional value of line, shape and color. As abstractionist painter Theo Van Doesburg expressed in 1930, “nothing is more tangible or more real than a line, a color, a surface… in painting, a woman, a cow or a tree is more abstract, more unreal, more vague than a surface or a line.”

Painting in Italy 1910s-1950s: Futurism, Abstraction, Concrete Art relays a complex historical account of the fraught relationship between art and politics in Italy during the interwar and postwar period, attesting to the bumps, curves, utopias and traumas experienced by an eclectic group of artists working to assert a new pictorial language by challenging the dominant tenets of their culture.

Painting in Italy 1910s-1950s: Futurism, Abstraction, Concrete Art is on view from 30 October – 22 December 2015. An illustrated 392-page book featuring an essay by Maria Antonella Pelizzari and an afterword by Gian Enzo Sperone will be published on the occasion of the exhibition.

Sperone Westwater is pleased to announce a solo exhibition by Nanda Vigo, the artist’s first in the United States. Vigo is widely recognized as a pioneer of contemporary Italian sculpture, installation and architecture. This exhibition features a selection of early vintage works from the artist’s influential Cronotopi series (1963–1969) alongside Trigger of the Space, a mirrored installation from 1974.

Vigo’s work is characterized by an attention to the phenomenological effects of light and space. As the etymology of their titles suggests, the artist’s Cronotopi works are designed to confound and enhance the viewer’s sensory perception of time, space and light. These minimal rectangular structures of glass, aluminum and neon incorporate transparent, opaque and glazed surfaces which reflect and diffract light. For Vigo, the immaterial play of light and reflection that results from these sculptures is the essence of the work.

Vigo’s Cronotopi and her dedication to light as medium were instrumental in developing the artist’s affiliation with the ZERO group and its international network of artists. Highlights of her relationship with the group include her 1962 design of the ZERO House, a living space featuring works by Enrico Castellani and Lucio Fontana. In 1965–1967, Vigo organized the pivotal exhibition ZERO Avant-Garde in Fontana’s studio, featuring many of the group’s most influential members. In presenting Vigo’s inaugural solo presentation in America, Sperone Westwater continues its ongoing commitment to artists of ZERO.

In the mid-1970s, Vigo began to use mirrors in triangular and pyramidal forms which served to shatter and reflect space at once. Trigger of the Space (1974) pairs facing mirrored right triangles to establish an interplay of luminous fragmented reflections. The introduction of mirrors into Vigo’s light works serves to distort and augment the space surrounding the sculpture, amplifying, as the artist puts it, the “vibrations of the invisible world” that resound throughout her oeuvre.

Nanda Vigo was born in Milan in 1936. She lives and works in Milan and East Africa. Vigo graduated from the Institute Polytechnique, Lausanne, and studied further in San Francisco and with Frank Lloyd Wright at Taliesin East. Throughout her career Vigo has maintained an interdisciplinary practice that frequently blurs the confines of architecture, design and art. Starting in 1959, Vigo engaged in frequent collaboration with Lucio Fontana, and in the following years her circle of friends expanded to include founders of the Azimut gallery Piero Manzoni and Enrico Castellani. Vigo became closely affiliated with the ZERO network, and from 1964–1966 took part in at least 13 ZERO exhibitions, significantly NUL 65 at the Stedelijk, Amsterdam. Vigo was presented with the New York Award for Industrial Design in 1971, the same year she designed the Casa-Museo Remo Brindisi, one of her most renowned projects. Vigo won the St. Gobain prize for glass design in 1976. Most recently Vigo has been featured in the major ZERO group retrospectives Italian ZERO Avant-Garde of the 1960s, MAMM, Moscow (2011); ZERO: Countdown to Tomorrow, 1950s–60s, Guggenheim Museum (2014); and 50 Years of ZERO, Martin Gropius-Bau, Berlin (2015).

Sperone Westwater
257 Bowery New York, NY 10002
The gallery is open Tuesday through Saturday, from 10am until 6pm, and Monday by appointment.