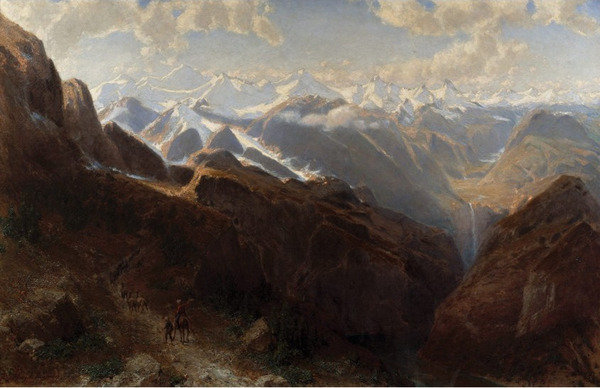 Boundless Reality features more than 150 works by artists from Europe, the United States, and Latin America. Spanning three and a half centuries of Latin American landscape art, the show includes works by 17th-century Dutch artist Frans Post; by the numerous artists from Europe and the United States who visited the region during the first half of the 19th century; and by native-born artists forging a language of national landscape painting during the late 19th century. The show includes drawings, paintings, photographs, and books by key figures including Ferdinand Bellermann, Frederic Edwin Church, Marc Ferrez, Auguste Morisot, Camille Pissarro, Frederick Catherwood and José María Velasco. Two paintings in the exhibition by Frans Post predate the 19th century, but most works were made during the 1830s, '40s, and '50s, the years following the Latin American wars of independence.

Boundless Reality delves into a genre that is receiving increasing scholarly attention. While Alexander von Humboldt's observations about the region's extraordinary scenery were influential, it was only after the colonies obtained independence from Spain that Latin America became widely available to the gaze of foreign artists. Traveling alone and on commercial and diplomatic missions, these artists documented the diversity and force of their encounters with the newly independent nations of Latin America.

The exhibition is curated by Harper Montgomery, the Patricia Phelps de Cisneros Professor of Latin American Art at Hunter College, and students from her master's course, Curatorial Practicum: Subjectivity and the Nineteenth-Century Latin American Landscape. Boundless Reality is the culmination of a multi-year collaboration between Hunter College, The Graduate Center at City University of New York (CUNY), Americas Society, and the Colección Patricia Phelps de Cisneros (CPPC).

Boundless Reality serves as an introduction to the genre of Latin American traveler art of the 17th to 19th century. It addresses the importance of this art in its moment and unfolds the rich histories that surround the individual artists and artworks.

This genre, which is only recently attracting a wider interest, begins with the curiosity that accompanied European imperialism. Alexander von Humboldt’s reflections on the aesthetics of landscape observation were appropriated by a new generation of travelers. These early 19th century travelers illustrated narratives of exploration in the New World, which were published and widely sought after in Europe, signaling the emergence of a new figure—the traveler artist.

The paintings and drawings produced during these adventures document the ways in which travelers encountered and experienced the region, and they influenced the ways in which Europeans have understood tropical nature and culture. At the time, Europeans imagined the tropics as a site for cultural imperialism and fantasies of self-realization. Traveler artists often authenticated this perception by presenting the landscape as an enchanted land.

In the middle of the 19th century, North American artists from the Hudson River School began to venture into the genre of South American landscapes. Frederic Edwin Church aspired to retrace Humboldt’s itinerary in order to redraw his views with new techniques and a new spirit.

Nearing the end of the period, native born artists were picking up the European landscape tradition and reflecting on their own culture and landscape through a different lens. José Maria Velasco’s paintings of Mexico not only demonstrate an adaption of the European enlightenment sensibility, but also illustrate the growing sense of national identity observed in the country at the time.

The significance of these images in the process of producing knowledge about these places indicates the range of approaches these artists had in considering their subjects. Some from a scientific perspective, others a quasi-religious zeal, all reflecting the major concerns of the 19th century mind as it was faced with this new and intriguing landscape.
Harper Montgomery