The first in a series of dialogue shows where the gallery invites two artists to show together. 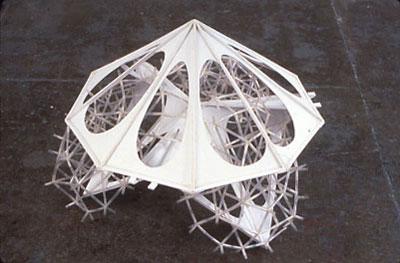 aspreyjacques presents the first in a series of dialogue shows where the
gallery invites two artists to show together. Kiaer and Ono both previously exhibited in 'Artists Imagining Architecture' at the ICA, Boston in 2000.

'In works that frequently employ found objects or materials and which resonate with research, Ian Kiaer has developed a uniquely poetic fusion of architecture, narrative and form. He often combines painting with architectural models and found objects in what at first glance appears to be a haphazard grouping but gradually reveals itself to be a carefully orchestrated arrangement"
Jessica Morgan on Ian Kiaer, Artists imagining Architecture, ICA, Boston 2000.

Ian Kiaer is based in London. He graduated from the Royal College in 2000 and had a solo show at aspreyjacques in 2001. He is currently showing at W139, Amsterdam and will exhibit new work at the 2003 Venice Biennale.

For aspreyjacques, Kiaer will show a work from a new project he is working on relating to the architect Moshie Safdie, who was influenced by D'Arcy Thompson's thinking on morphology as a building process and developed complex modular buildings which could adapt to any landscape for high density living.

'Jeff Ono assembles his painstakingly incremental floor pieces from a narrow range of low-tech materials, including chipboard, clay and tape. The results look like a cross between futuristic architecture and anatomical interiors. His work is a long time in the making but always worth the wait'...
Holland Cotter, The New York Times, Dec 2001.

Jeff Ono is based in Los Angeles and recent solo shows included Marc Foxx, LA and Feature, New York. His past work has focused on exploring internal architectural structures for their inherent strength, beauty and fragility with a use of materials which falls into the realm of the hobbyist. Ono's practice has not really changed since he first started making objects 6 years ago x{2013} he still lives and works in the same apartment so the scale of the sculptures remains the same: no bigger than an ottoman.

The new work for aspreyjacques is more concerned with articulating anomalous forms that seemingly mock a harmonious rational system.

Through this, Ono explores failures within complex structures and abnormalities that disrupt repetition. Influences for this new body of work include chinese spirit stones, foraminifera and fictional extra credit homework projects.