The exhibition investigates the ways in which drawing intersects with typography, photography, film and computer-graphics. Its scope reaches back to the beginning of the 20th century and includes artists working today to question the status and impact of a trace, produced through the interaction of man and machine. Works by Carl Andre, Marcel Broodthaers, Tony Conrad, Sigmund Freud and many more. 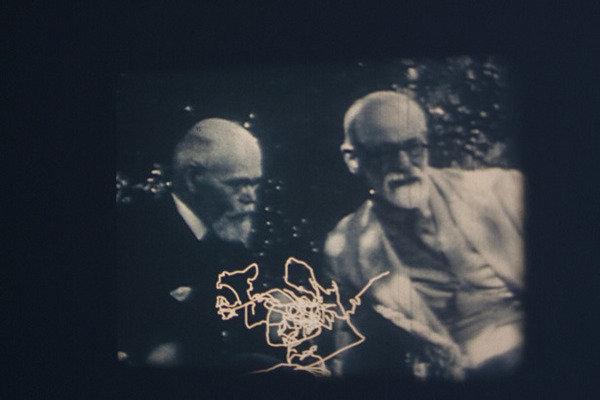 Graphology explores a genealogy of automated drawing from a contemporary perspective. The scope of the exhibition reaches back to the beginning of the 20th century and includes artists working today to question the status and impact of a trace, produced through the interaction of man and machine. Under investigation are the techniques that translate direct experience into different forms of systematised representation, between the trace and the sign, between writing and drawing. Graphology investigates the ways in which drawing intersects with typography, photography, film and computer-graphics.

Automatic writing spans a long tradition, with an obvious strong moment during the heyday of Surrealism, as illustrated by the image of the typewriter on the cover of the first issue of ‘La Révolution Surréaliste’ (1924). This is typical of the range of techniques that have been employed by artists and writers to visualise their ideas, allowing for a particular tension between the hand and the medium, between automatism and automation.

The term ‘graphology’ implies a strong awareness of both medium specificity and human agency. A medium mediates, it is an agent; it sets its own standard, implies its own logic, it induces its own message. But so does the eye of the beholder. The exhibition focuses on the human hand as a living seismograph of inner life, but with extra attention to the ‘mechanical unconscious of the machine’ which imposes itself on the human eye. It considers how graphic techniques of reproduction, including those of the moving image, start to live their own lives.

Graphology is conceived by Edwin Carels (curator, M HKA, Antwerp and researcher in the arts KASK/Hogent). Chapters 1–4 formed a series of exhibitions at M HKA, Antwerp, Belgium, during 2011. This exhibition, chapter 5, evolved in collaboration with the Drawing Room as will chapter 6, Graphology: drawing from automatism and automation, a book that will be published in June 2012. It will include images from all chapters of Graphology and essays by Edwin Carels, Ed Krcma and Thomas Zummer.

The exhibition explores the link between drawing and typography through works that use a diverse range of methodologies, from the type-written concrete poetry works produced by Carl Andre in the 1970s to work being produced today such as Fiona Banner’s ‘Mother’, an interactive work that includes a reconstructed typewriter and a ream of paper. The work references both the roots of language and the frustrations associated with its short-comings. Dean Hughes’ plinth-based work consists of strewn staples that, variously distorted through use and in disarray, begin to resemble a cryptic language. Stefan Brüggemann’s ‘Make See’ (2009) is a work consisting of neon letters that are sprayed black each time they are exhibited, leading to the gradual obliteration of legibility. In works that range from hand-woven carpets to wall-drawings, Mekhitar Garabedian adopts his half-learned native Armenian language to collapse the distinction between legible words and image.

The parallels between photography and drawing are examined through the work of Pierre Bismuth and William Anastasi. Bismuth has made a series of ‘Left Hand Tracing’ works which fuse still or moving images of famous people with furiously scribbled lines. Graphology will include the 16mm film, ‘Following the Right Hand of Sigmund Freud’ (2009) in which these scribbled lines, which follow the movements of Freud’s hand, are drawn with light, a reference to the origins of photography. William Anastasi’s ‘Pocket Drawings’, which are a continuation of the ‘Subway Drawings’ he began in 1964, are presented as a series of modular, framed scribbles that are produced in the artists’ pocket (a makeshift darkroom) as he takes a walk of a pre-determined duration.

The employment of electronic mediation and of generative procedures is explored through the contemporary work of Anna Barham and Wim Janssen, alongside work produced in the 60s by the Structuralist film-maker Paul Sharits and the artist and theorist Brian O’Doherty. O’Doherty’s ‘Boxed Duchamp’, (1967-8) is part of a suite of works derived from mechanically produced ‘cardiogram drawings’ of Duchamp’s heartbeat.

The durational unfolding of drawing, its linearity and capacity for rhythm, tie it inextricably to film. Anthony McCall’s ‘Pencil Duration’ (1973) is generated through the setting of a simple task. The simplicity of means (household paint applied to cheap paper) used by Tony Conrad to produce ‘Yellow Movie, 1/12-13/73’ (1973) generates a movie that unfolds imperceptibly slowly and indefinitely. The presentation of Man Ray’s ‘La retour à la raison’ (1923) as a strip of film that is displayed on a light box brings it back to its original drawn condition.

To coincide with the exhibition Graphology conceived by Edwin Carels (curator, M HKA, Antwerp and researcher in the arts KASK/Hogent), Pierre Bismuth will give a presentation about his ongoing series of films on writing and show an unseen video variation of Following the left hand of Jacques Lacan.

Peter Kubelka will discuss his work in the exhibition Films on paper 1958-60, made from typed cut outs and exhibited for the first time, alongside related work and a screening of one of his other films.

Anna Barham's Slick Flection 2012 is further development of a text first performed by the artist in 2009. Borrowing its structure from the annotation of a tap dance, syllables are repeated and reordered in such a way that their meaning is dispersed in favour of the rhythms and percussive qualities of a voice and text. This new version has been made through conversation between Anna Barham and tap dancer Carrie Topley, who will perform the piece.

The afternoon will close with a programme of short films by Guy Sherwin, Paul Bush, Stuart Hilton, Robert Breer and others, selected by Edwin Carels.