The Anabasis of May and Fusako Shigenobu, Masao Adachi and 27 Years Without Images. The exhibition consists of an installation encompassing his 2011 experimental documentary film, which centres upon the oral testimonies of two JRA protagonists. This is shown alongside documents, photographs, prison drawings. 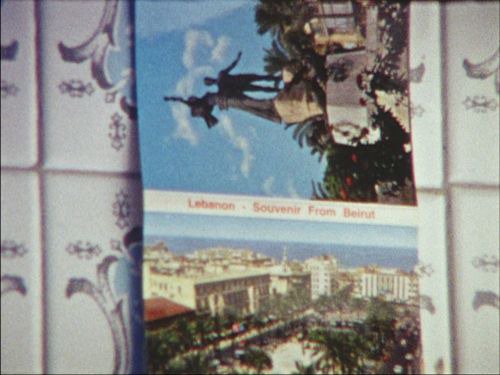 The Anabasis of May and Fusako Shigenobu, Masao Adachi and 27 Years Without Images is the first UK solo exhibition by French artist Eric Baudelaire.

Baudelaire’s most recent work looks at the complexities of recounting the history of the Japanese Red Army (JRA) – a radical group that emerged from the 1968 Tokyo student movement, settled in Beirut in the early 1970s, and engaged in sophisticated terrorist activities in solidarity with the Palestinian cause.

The exhibition consists of an installation encompassing his 2011 experimental documentary film of the same name, which centres upon the oral testimonies of two JRA protagonists: May Shigenobu, the daughter of JRA founder and leader Fusako Shigenobu, and Masao Adachi, a legendary underground film director, JRA member and theoretician. This is shown alongside documents, photographs, prison drawings and works on paper that further contextualise the JRA's radical journey, focusing on issues of representation associated with documentary, testimony and the production or absence of images. The Anabasis... engages with questions concerning the relationship between politics and film, and militant filmmaking versus activism without cinema – a distinction that Masao Adachi refuses, but that Baudelaire’s exhibition interrogates anew.

Baudelaire frames the story of the JRA in a literary tradition going back to Xenophon’s Anabasis: a journey of soldiers lost in foreign lands, wandering into the unknown on a circuitous journey home. In recounting their own journeys, May Shigenobu and Masao Adachi weave together intimate stories, political history, revolutionary propaganda and film theory. They each describe clandestine and imageless experiences in which images are nonetheless constantly at stake. May Shigenobu, for instance, spent much of her early life in hiding, often living under pseudonyms. When family snapshots were occasionally taken they were always then hastily destroyed. As she grew older, returned to Japan and started working as a television journalist, images began to provide her with a new means of self-invention.

As a filmmaker, Adachi devoted his life to images. During his years in Lebanon, he sought to advance his radical film practice by trading the camera for the rifle. Yet all the while he remained a filmmaker at heart, even conceiving of JRA aeroplane highjackings as screenplays. The scenarios were his own, the actors were JRA fighters, but the cinematography was left to the news cameras.

May Shigenobu’s and Masao Adachi’s stories unfold over new 'fûkeiron' Super 8 images filmed by Baudelaire in Tokyo and Beirut. Fûkeiron is a 'theory of landscape' developed by Adachi for his 1969 film AKA Serial Killer, an excerpt of which is also included in the exhibition. Through filming landscapes, he sought to reveal the structures of oppression that underpin the political system and cause alienation. The Anabasis... puts this theory to work and also turns it back towards its author, exploring the problematic overlaps between images of reality and those of fiction, and between a radical political engagement and an unsettling fascination with violence.

Saturday 12 May
2-4PM
SCREENING & DISCUSSION:
A screening of The Anabasis... (2011) by Eric Baudelaire, followed by a discussion between the artist, Gasworks' exhibitions curator Robert Leckie and Anna Colin, Associate Director of Betonsalon, Paris.

SCREENING PROGRAMME:
A programme of films by legendary Japanese film-maker Masao Adachi will be screened at Gasworks from May – July 2012. The series is co-programmed by Julian Ross, a freelance film programmer and PhD candidate at the Centre for World Cinemas, University of Leeds. Details below:

22 May, 7pm
Galaxy (1967, 75min, with English subtitles)
Produced by former members of the Film Club of Nihon University, Galaxy shows Adachi's surrealist roots. It begins with a car breaking down on a seafront in Japan. Whilst the passengers try to fix it, a young man amongst them begins to dream and meets doubles, demons, and figures from history.

27 Jun, 7pm
The Red Army / PFLP: Declaration of World War (1971, 69min, with English subtitles)
Directed by Masao Adachi & Koji Wakamatsu
The Red Army... was made by Masao Adachi & Koji Wakamatsu in 1971 in Beirut, in collaboration with a newly-emerging Japanese Red Army (JRA) cadre and leaders of the Popular Front for the Liberation of Palestine (PFLP). Together they produced this newsreel-style depiction of the everyday activities of Palestinian fighters, which they intended as a 'declaration of world war'.

10 July, 7pm
Prisoner/Terrorist (2007, 113min, with English subtitles)
During a suicide attack on an airport, the hand grenade of 'M', one of three terrorists, malfunctions and he is captured. Maltreated in prison, he slowly loses his grip on reality, as is forced to confront his ideological convictions. Prisoner/Terrorist was Adachi’s first film in 35 years and is inspired by Japanese Red Army member Kozo Okamoto, who was imprisoned by the Israeli government after perpetrating the infamous massacre at Lod Airport in 1972.