Someone told me that the 'Merveilleux' is over. Swinging over prejudices, the artist stands beyond the cultural borders which hold back our societies. Still on a burlesque style, sometimes close to the absurd, his montages try to confuse the issue by manipulating the images. 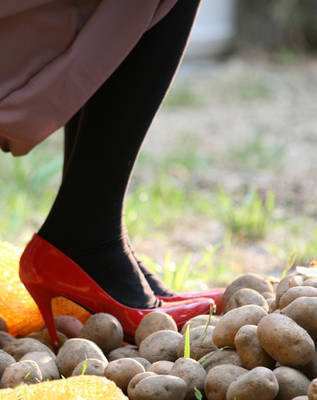 With his dual affiliation, Christian and Moslem, Mehdi-Georges Lahlou uses his body to question the identity in all its forms.
Renewing the vocabulary of sculpture and image, all his work shows a tension that goes along with great freedom.

For his second solo show at Galerie Dix9 – Hélène Lacharmoise in Paris, the artist presents his last self-portraits in the form of sculptures, installation and photographs. 'Quelqu'un m'a dit que le merveilleux était révolu' ( Someone told me that the 'Merveilleux' is over), is a new stage in his quest for freedom and emancipation from preconceived ideas. In those new works, the artist still plays on ambiguity through displacements that he operates with great talent.

Using his own body as a medium, Mehdi-Georges Lahlou plays with its presence and its absence. Through performances, installations, photography or video, the artist is always breaking through stereotypes. He transforms his body as he subverts traditions. He knows, through juxtaposition, how to walk a fine line in order to disturb formal and established conventions. He uses feminine attributes (high heel shoes, lipstick, veil) but keeps his masculine appearance (bear, sex, muscles). His disguise is partial and thus disturbs the norms for gender, social and sexual definition.
He manipulates as well religious icons, mixing Christian and Muslim aesthetics in order to question the signification of images. It is not a question with Mehdi-Georges Lahlou of any 'choc des cultures'; for him, all culture is confining. To quit one means entering another.

His visual work always deals with questions of idiocy. To be an idiot, or a kind of pawn, is a way to fight with coherence and freedom against the seriousness of any system. This applies even to the titles of the works, like the videos or performances which are aptly named 'controlled stupidities' or the 'virgins with a child' that become 'it's more sexy'.

Swinging over prejudices, the artist stands beyond the cultural borders which hold back our societies. Still on a burlesque style, sometimes close to the absurd, his montages try to confuse the issue by manipulating the images..

Always in his singular approach that questions the image, Mehdi-Georges Lahlou provides, to the view as well as to the mind, a new and amazing regard on the beliefs, cultures and signs.

A work that embraces the 'Merveilleux'.

Oops-a-daisy! Mehdi-Georges Lahlou tumbled into the art scene like a jack-in-the- box. This French/Moroccan-Spanish artist living in Brussels was immediately able to charm the art world with a colourful variety of images that supply fanned out to include all sorts of sculptures and installations, as well as performances, photos and video works in which he himself appears. Is he a court jester in black tights and red high-heels, a stand-up philosopher who explores questions of identity, a spiritual clown, an artful conjuror who produces attractive works of art out of his hat, a reluctant provocateur, an acrobat of the imagination or a meditative social researcher? He is probably a little bit of them all. With his infectious grin he puts Islam and Catholicism into the blender together with the macho-Muslim, women and prostitutes. He puts stereotyped attributes through the mangle, mixing them up, breaking them down and transcending them while also cherishing them. He adds a measured dose of art history, crumbs from the 'Thousand and One Nights' and a generous splash of absurdity that sneaks in the tradition of burlesque and plain idiocy through the back door. And then sets course for the miraculous, the magic of the ordinary and the dream. Mind you, this art whizzes across many layers of meaning, does not hesitate to glide over slippery ice and marks out an exciting network of associations and possible angles of thought.

- Exercises In Magic. The first time I saw this work its generosity was striking, as well as its ritual nature and seductiveness. In 2010 he installed a dark room with sensual photographic works and a living room cabin with a satellite dish at Art Brussels. After offering you tea and a Moroccan pastry, he put on a téte-à-téte performance of your choice. I have rarely witnessed such a stimulating performance. The only item no longer available on the handwritten menu was the 'performance sexuelle'. For me he played the flute under a niqab that exposed only his beseeching gaze, and that was enough to make you uncomfortable. Mehdi-Georges Lahlou pumps fresh oxygen into performance art. In 'Stupidité Contrôlée', a series of pointed video performances with a tennis ball in his mouth or a stone on his veiled head, this is done with a delightful penchant for burlesque. He never puts on the same performance twice in his live work. Either it's a piece with lots of elements that are not afraid of being kitschy, or else his endurance is put to the test by a concentrated or protracted action or pose. His beard makes him look entirely Muslim, and that creates a grotesque contrast with the red high-heels, which are a fairytale element and a typical accessory of the prostitute. Apart from this, he puts on black tights or an improvised niqab. In the skin-tight outfit he undertook races and walks of several kilometres while wobbling on the red shoes, ran on the spot on a mosaic tile and wrapped himself in the niqab to peel 65 kilos of potatoes, which is his own weight. This summer he stood in this robe for hours in the burning sun. For three days he motionlessly held a pose that came close to mystical ecstasy. This performance is accompanied by a group of still sculptures: casts of his own body in the Islamic prayer position plus a kneeling figure, all covered by the folds draped in white plaster. For Muslims this is the colour of mourning and in Christianity it represents purity. It might remind you of Kader Attia and other artists who touch on Islam, but no one else takes the combination of Arabic and Western culture so far and so consistently.

- Exercises in Ambiguity. 'I use only the aesthetics of the two religions', this young conceiver of images emphasises. 'It's just that Islam is so embedded in everyday life that they are in- separable. It is not a reconciliation of opposites, because the two religions have the same foundations.' On the basis of his own multicultural identity, he asks whether people could evolve towards a different, more flexible identity. The mix- ing of religion, culture and gender seems like a plea for tolerance, a proposal for a harmonious, quasi utopian world. But the result is often quite hilarious. He himself refers to 'exercises in ambiguity'. Fusions test out how ambiguous Islamic, Catholic, male and female elements can become. This ambiguity offers the possibility of tinkering with our stagnated identity. This topic first cropped up in 'Ceci n'est pas une femme musulmane', a 2009 photographic work. 'It is not a carnivalesque fancy dress party or a role- playing', he says, 'It's rather that I dress Islam in Catholicism and vice versa.' Mehdi-Georges Lahlou is a fan of surrealism, Fluxus, the French leg fetishist Pierre Molinier, American feminist artists of the 1970s, such as Martha Rosler, and also Gina Pane, Valie Export and Marina Abramovic. He pumps fresh oxygen into these art movements too, without concealing their historical basis. He borrowed the title 'Messe pour un corps' from the French performance artist Michel Journiac for a self-portrait with books, a many-layered sculpture with a headless body made out of colourful prayer mats. Whether he likes it or not, these may be exercises in transgression. Which is a great strength in art : the avant-garde excelled in breaking rules. At the same time they are exercises in beauty, a form of critical elegance. 'Home Sweet Home' is a black box on long legs showing a video of a cramped room in which he rummages around a small black cube stark naked apart from the red high-heels. This black cube, which is gradually becoming a permanent fixture in his work, might refer to the Ka'aba, Malevich's black square, Pandora's box, the camera obscura or a magic box. It gets bigger and bigger. 'The Assembly', a recent black & white photo in which the artist transforms into a group of Muslim women around a cube on a table, hung in a cube the size of a room. Together they form Construction cubique ou la pensée confuse. Whatever he undertakes, he always considers man's present-day confusion in an increasingly confused world.