H.S.O.P - 1973. In his paintings, figurative elements appear throughout the work, and just as quickly disappear into chaotic moments of abstraction. 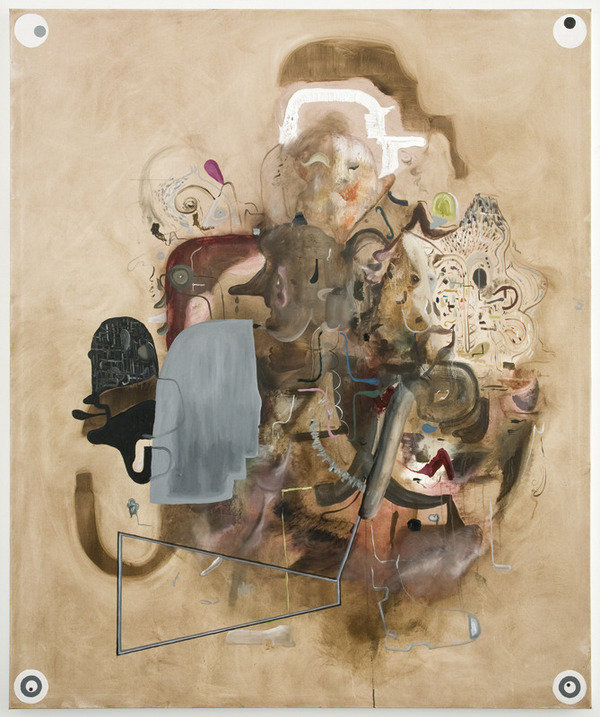 Lisa Cooley is thrilled to announce Michael Bauer's first solo show at the gallery, which will also be his first solo show in New York. His work is well known in Europe, and has been presented in numerous museum exhibitions there. He recently moved from Berlin to New York, and we are very pleased to be presenting this new, energetic group of works.

In Michael Bauer's paintings, figurative elements appear throughout the work, and just as quickly disappear into chaotic moments of abstraction. He speaks about the paintings as being portraits of gangs, families, music bands, collectives, or mobs - a grouping of characters revealed through the occasional eye or profile emerging from shadowy abstraction. Flat, crisp, bright, patterns usually provide the structure from which these organic nebulas originate.

Bauer uses various framing devices such as corner dots or checkered grids to flatten the picture plane. He likens the canvases to playing cards, and sees each one as a character in an unfolding cast; a mad tea party of sorts in which the paintings become posters or trailers for a film.

Michael Bauer was born in 1973 in Erkelenz, Germany and studied at the Hochschule fur Bildende Kunst in Braunschweig, Germany. His work has been the subject of many solo exhibitions throughout Europe, including Anthem, Kunsthaus Baselland, Basel (2009); Peter Kilchmann, Zurich (2011); Norma Magione Gallery, Turin (2011); Villa Merkel in Esslingen am Neckar, Germany (2011); Linn Luhn, Cologne (two-person show with Charlie Hammond, 2010); Marquis Dance Hall, Istanbul (2010); HOTEL, London (2006 and 2009); and Kunstverein, Bonn (2007). A monograph on Bauer’s work, entitled “Borwasser” was published by JRP Ringier Press, (2008) with a catalog essay by Jennifer Higgie, co-editor of Frieze magazine. His work is included in the Saatchi Collection, the Zabludowicz Collection, and the Boros Collection.

For more information, please contact Kelly Woods at kelly@lisa-cooley.com or 212-680-0564.