The paintings in 'Plate Interference' depict a class of everyday objects which imply that, to the act of making a painting is analogous to the daily activity of making something dirty, and then washing up afterwards. 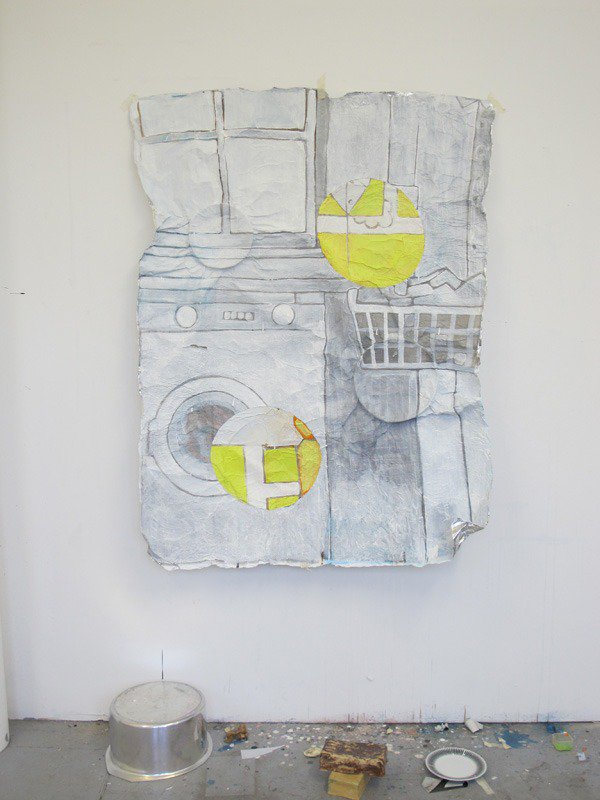 To Charlie Hammond, art is work. Recently, his art has taken the notion of everyday work—cooking, cleaning, ironing, making, sweating—as its subject. Hardly noble, Hammond’s paintings reflect the more awkward and absurdist qualities involved with getting things done. The paintings in Plate Interference depict a class of everyday objects—a washing machine, an iron, a laundry hamper, a kitchen sink, and a goose necked bottle of Toilet Duck—which imply that, to Hammond, the act of making a painting is analogous to the daily activity of making something dirty, and then washing up afterwards.

Made on sheets of industrial aluminum foil that have been impressed with the shapes of dinner plates, broom handles and “interfereing crockery,” the painted surfaces of the works included in Plate Interference are both phycially and visually disrupted. The plates get in the way. They literally deform and displace the image. In physics, this notion of “plate interference” most often describes the refraction of light from a reflective or semi-reflective surface. This optical interference can be destructive, producing distortions by taking similar waves out of phase; but it can also be constructive, an act of bringing unlike waves into phase with each other. In this latter sense, Hammond’s theory of plate interference acts as a metaphor for painting, a reflexive acknowledgement of the age old problem of finding ways to represent a three dimensional object on a two-dimensional surface.

Charlie Hammond lives and works in Glasgow, Scotland. He holds a painting degree from the Glasgow School of Art. His work has been exhibited extensively throughout Europe, with solo exhibitions at Galerie Kamm, Berlin, Sorcha Dallas, Glasgow, Linn Lühn (with Michael Bauer), Cologne, and group shows at Gallery of Modern Art, Glasgow, the Royal Hibernian Academy, Dublin, and at the 2007 Prague Biennial. Hammond’s work has also been widely exhibited in the United States, with solo-exhibitions at Anton Kern Gallery, New York, and Michael Benevento, Los Angeles. In 2014, Hammond worked as artist–in–residence at the CPH AIR in Copenhagen. Plate Interference is Hammond’s first exhibition at Lisa Cooley.