Zero Tolerance: exhibition chronicles the vital legacy of artists from across the globe who address tensions between freedom and control. For "Art Amnesty" Bob and Roberta Smith invited the artists to deposit their art in dumpsters located in the museum's courtyard before to be destroyed. Francesco Vezzoli collaborated with a team of archaeologists and polychrome specialists to paint 5 ancient Roman busts in the manner in which they would originally have been decorated. 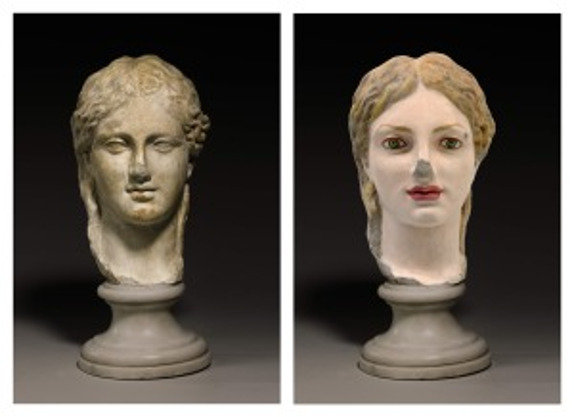 MoMA PS1 presents Zero Tolerance, an exhibition that chronicles the vital legacy of artists from across the globe who address tensions between freedom and control.

Zero Tolerance will be on view in the First Floor Main galle ries at MoMA PS1 from October 26, 2014 through March 08, 2015 and brings together over twenty works by twenty artists.

Over the past two decades, some local and national governments have garnered attention for imposing draconian laws that restrict the rights of citizens under t he guise of improving quality of life. Rio de Janeiro has “cleaned up” slums by imposing a militarized police force and Istanbul has put pressure on minority communities by gentrifying the neighborhoods in which they reside. In Russia, the arrest of two me mbers of the art band Pussy Riot for speaking against President Vladimir Putin, along with the passage of anti-gay legislation, has generated international ire. Such restrictive policies have marked everyday life in major cities around the world.

Through their work, artists such as Halil Altindere (Turkish, b. 1971) and Amal Kenawy (Egyptian, 1974 - 2012) address themes such as the freedom of expression and the role of the artist within society. Altindere’s Wonderland (2013) explores the anger and frustration of a group of youths from the Sulukule neighborhood of Istanbul, a historic area home to Romani communities since the Byzantine Empire that has been increasingly demolished since 2006 as part of an “urban renewal” development project. Kenawy’s The Silence of Sheep documents a short performance the artist orchestrated in downtown Cairo on December 14, 2009 and is a commentary on people’s submissiveness to local living conditions and cultural norms.

Named for the 1990s policy under which New York City took a tough stance against vice and crime, Zero Tolerance brings together works by artists from across the globe that address tensions between freedom and control. Many of the works combine elements of political demonstration and celebratory parades to create a rt of a charged and ambivalent nature, responding to concerns specific in place and time.

Bob and Roberta Smith are offering an opportunity for artists to dispose of their artwork at MoMA PS1, and to retire from making art. Beginning October 2, a rtists are invited to deposit their art in dumpsters located in the museum’s courtyard, which will be emptied as needed throughout the period of the Art Amnesty. Those who wish to exhibit their work one final time before it is destroyed may bring their art to the 2nd Floor Main Galleries, where museum staff will install it for public view. The museum will accept work under the Art Amnesty during regular hours, subject to certain restrictions that will be published at momaps1.org. The exhibition reprises and expands upon their Art Amnesty originally presented at Pierogi Gallery in 2002.

As part of the Art Amnesty, the Smiths will also make available a pledge form at the museum that can be signed by any artist or member of the public: I PROMISE NEVER TO MAKE ART AGAIN. Those who commit themselves will receive an official I AM NO LONGER AN ARTIST badge designed by Bob and Roberta Smith, and shall be invited to create one final drawing for inclusion in the Art Amnesty gallery exhibition, using materials provided onsite. Those wishing simply to discard a work will be asked to sign a pledge that reads I NEVER WANT TO SEE THIS WORK OF ART AGAIN.

While the Art Amnesty provides an occasion for artists to clear out their studios, it also serves other needs. Those who have bee n the victims of gifts of art, for example, are invited to dispose of these unwanted aesthetic presents at the museum. And as the Smiths note, “Many successful artists have recently voiced embarrassment that their work commands high prices. Artists may als o use the opportunity of the Art Amnesty to expel certain works of art from the art market and demote them to objects unburdened by grand expectations and dashed dreams.” The Smiths will be the first to contribute to the Art Amnesty, discarding a batch of work previously exhibited in New York.

At the conclusion of the Art Amnesty, the museum will securely dispose of all art works contributed to the exhibition and dumpsters.

At the opening of the exhibition on October 26, Bob and Roberta Smith will also organize an Art Party at MoMA PS1, at which children will be encouraged to make art with their families using art materials available at the event. Beginning at the Art Party and throughout the run of the Art Amnesty, a third pledge form will be available f or signing, which states I WILL ENCOURAGE CHILDREN TO BE ALL THAT THEY CAN BE. CHOOSE ART AT SCHOOL. These pledges will be collected, along with "first drawings" children make and wish to contribute, and mailed to local politicians to encourage arts funding and arts education. “The personal journey for most artists starts with enthusiasm and joy, and ends, if the artist does not have huge success, in embarrassed children taking their dead parents' work to the dump,” the Smiths explain. “Taken together, the Art Amnesty and Art Party explore the full arc of the life of an artist.”

The Art Party was initiated in Brooklyn in 2011 “to provide a creative yet critical discourse of hope in response to the Tea Party’s discourse of austerity and des pair.” As the Smiths stated at its inception: “The Art Party stands for stimulus and sensible long - term measures to rebuild American confidence. The Art Party says singers make America sing and dancers make America dance. The Art Party celebrates that innovation comes from sheets of blank paper and pencils. The Art Party has a broadly liberal and humanistic agenda on other issues. Where the Tea Party is hawkish the Art Party is peaceful. The Art Party is opposed to the death penalty and supports women’s rights. The Art Party is not a formal political party but rather a pressure group and natural home for progressive liberal people to unite on issues of agreement.” The Smiths have subsequently organized Art Party events throughout the United Kingdom to protest the British government’s proposed eradication of art from the British school syllabus.

Drawing equally from conceptual performance history and nonsense literature, as well as te nets of British empiricism and the rhetoric of political campaigns, Bob and Roberta Smith's allergy to pretension and preciosity can lend an offending bluntness or seeming nihilistic absurdity to their actions. The Smiths ask:

Why are some people artists while others are not? Was Joseph Beuys an idiot when he said everyone is an artist? Do artists think they are a cut above the rest of us? Are the arts a good in themselves, or is it much, much, more complicated than that?

Many artists delude themselves into believing that they are promising, productive artists when they would live much more fulfilled and useful lives engaged in proper employment. I PROMISE NEVER TO MAKE ART AGAIN provides a baptism of necessary real life and allows artists to "Get Real." Ditch a life of poverty and precarious self- employment! Don't miss a life -changing opportunity.

MoMA PS1 presents an exhibition of works by Francesco Vezzoli (Italian, b. 1971). Drawing on extensive research about the use of color in antiquity, Vezzoli collaborated with a team of archaeologists, conservators and polychrome specialists to paint five ancient Roman busts in the manner in which they would originally have been decorated.

While white marble remains the quintessential material of ancient Greek and Roman statuary, extensive research has confirmed that ancient sculpture was painted in a vivid palette of yellows, blues, reds and greens. Dating from the first and second centuries A.D., Vezzoli’s Roman Imperial busts restore to contemporary imagination the decorated surfaces that have faded away over nearly two thousand years.

Vezzoli collabora ted with Dr. Clemente Marconi, Professor in the History of Greek Art and Archaeology at NYU and Director of the Institute of Fine Art’s excavations at Selinunte and Dr. Andrew Wallace - Hadrill, former Director of the British School at Rome, Master of Sidney Sussex College, Cambridge and Director of Rese arch in the Faculty of Classics, Cambridge.

ABOUT THE ARTIST In much of his work, Francesco Vezzoli has mined Hollywood cinema, celebrity, and religion for inspiration. His 2011 exhibition Sacrilegio was presented in a church - like environment and incorporated digital copies of Madonna and Child paintings, in which the faces of Mary were replaced by those of supermodels. He has also created a fake trailer based on Gore Vidal’s Caligula, a mock political campaign featuring Sharon Stone and philosopher Bernard - Henri Lévy, and a narrative of his own death in the manner of the TV program E! True Hollywood Story. Complicating this is the artist’s vested interest in architecture, craft, and design, and in part icular in Anni Albers, one of the Bauhaus’ key figures, who influences Vezzoli’s own work with textiles. Working in video, installation, embroidery, and other media, Vezzoli combines the sacred, profane, and popular with a generous sense of humor and critical eye.

SPONSORSHIP
The exhibition is made possible by the MoMA PS1 Annual Exhibition Fund.