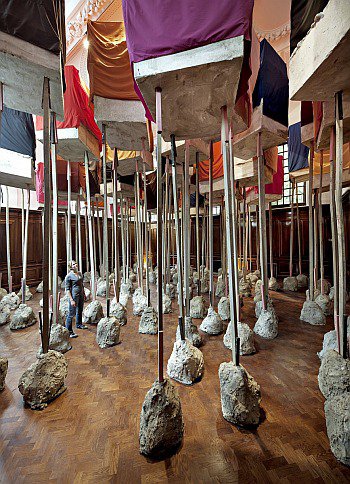 On Sunday, May 13, 2012 at 12.00 the Ludwig Forum Aachen will open the exhibition "BRINK" by British artist Phyllida Barlow who will receive the Aachen Art Prize 2012 for her innovative impulses in sculptural art. The laudation is held by Prof. Kasper König, Museum Ludwig Köln. The British Ambassador in Germany, S.E. Simon McDonald, will be present.
Since the 1960s, Phyllida Barlow, born 1944, has developed large-scaled sculptures that define a special relationship with painting and everyday life. As professor at the Slade School of Fine Arts in London, she has been an influential art teacher. Among her students are Rachel Whiteread, Douglas Gordon, Bill Woodrow, Angela de la Cruz and Eva Rothschild.

BRINK is the first time for Phyllida Barlow to have a solo show in an art museum in continental Europe. Seven new sculptures haven been specially created for the Ludwig Forum Aachen. The former umbrella factory with its Bauhaus architecture from 1928 has been turned into a museum in 1991 and houses around 3,000 works of the Peter and Irene Ludwig’s collection, among them many key works of art from the 20th and 21st century. The building’s central exhibition hall with its shed roof construction turns a visit into an impressive experience of art and space.

Phyllida Barlow’s works open a mental field that show new ways to sculptural art and, at the same time, recall associations with events from everyday life and recent political events. Two of the works are placed on the outside above the central hall. They can only be seen through the glass roof from the inside. The titles of all seven works allude to social phenomena like mass protests and demonstrations but also to art history.

The "sad monument" with a respectable height of 8 meters references the two vertical scrolling text bands by Jenny Holzer. Four more works are installed in the centre of the exhibition hall, a stepped atrium of about 300 square meters. "Piano" references Joseph Beuys’ "Plight" from 1985, his last project in Great Britain before his death. The exhibition BRINK gathers the sculptures in situations of change "on the brink". In the same way as the museum space is used as a total theatre for staging her works, she reverences the outside space. Shreds of images from the recent history appear in our minds. The fences and the tower are rather alarming: Camp or amusement park? A cabin-like pavilion is in line with these associations: a shelter? In this sense, Barlow’s works show commitment while staying autonomous. From the artist’s perspective, they question the role of sculpture in contemporary art just as much as they reflect the events of our times.

The exhibition is part of the Parallel Programs of manifesta 9: www.manifesta9.org