The show celebrates the Forum's 10th anniversary. Recent and newly-commissioned works by 10 artists with ties to Austria and New York, who employ the landmark architecture of the Forum to explore themes that celebrate the history and mission of the centre and its role within the city. 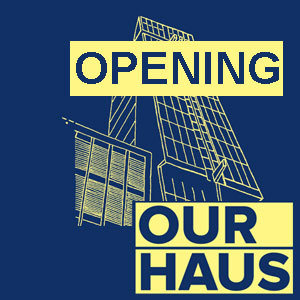 The Austrian Cultural Forum New York (ACFNY) is proud to present Our Haus, an exhibition in celebration of its ten year anniversary. Curated by Amanda McDonald Crowley, Our Haus forgoes a typical survey, instead examining the many facets of the Forum's mission as a place for the presentation of contemporary culture, as a center for the discussion of ideas and establishing cross-cultural relationships. These aspects are presented through recent and newly-commissioned works by ten artists with ties to Austria and New York, who employ the landmark architecture of the Forum to explore themes that celebrate the history and mission of the ACFNY and its role within the city.

Central to the exhibition is Rainer Prohaska's Cuisine à tous les étages ("Kitchen on every floor") (2012), an interactive installation that invites visitors to visit kitchen stations extending throughout the narrow verticality of the building's gallery space. Each station will provide one item to create a meal, fostering an exploration of the space and conversation among guests. New bonds and repurposing of the building are also reflected in the work of the collective WochenKlausur, who have created an office and meeting room within the gallery, inviting a variety of local non-profit organizations to both network and operate in the space for the run of the exhibition.

Judith Fegerl—known for her sculptural work that combines intangible elements with the constructed and using electricity as a medium in her work—will intervene within the architecture of the building itself, creating drawings via controlled electrical fires in the walls. Conversely, Sabine Bitter and Helmut Weber have created an architectural intervention upon the walls themselves through a specially commissioned wallpaper designed for New York City.

Rainer Ganahl, a veteran New Yorker, has produced a video that traces the route up Third Avenue, contrasting the open architecture and bustling neighborhood surrounding the ACFNY with his adopted home of Spanish Harlem and its boarded-up residential spaces. Architectural disparity is also present in the paintings of New York-born, Austrian-raised Fabian Patzak, who creates intimate impressions of buildings and fixtures found in his travels for what will be his first exhibition in the city.

Johanna Kandl and Helmut Kandl channel a personal sense of domesticity through vintage super-8 films of her childhood home, edited together with contemporary footage of its now-abandoned state. Johanna Kandl also welcomes visitors to Our Haus with a second work, a large painting entitled Wir haben viele Freunde ("We Have Many Friends").

Similarly personal is the work of Matthias Herrmann, who presents still lifes created from his recent New York residency that reflect upon topics such as sexuality, sexual health, and body image. For the first time these works are also freely available as postcards, allowing a direct and personal exchange between artist and audience. The Linz-based collective TIME'S UP will present Unattended Luggage, an installation that draws the audience in to the vast history of immigration in New York by providing items of luggage for them to peruse.

Lastly, interactivity takes a more lighthearted turn in Mathias Kessler's Das Eismeer, Die gescheiterte Hoffnung ("The Arctic Sea, The Failed Hope"). The famous titular landscape by Caspar David Friedrich is recreated by Kessler as a sculpture inside a mini-refrigerator that visitors are encouraged to gaze upon as they help themselves to a bottle of beer. A social sculpture, the intention is that audience members also engage in conversation while contemplating the view.

About Amanda McDonald Crowley
Amanda McDonald Crowley is a New York-based Australian curator and facilitator who has created programs and events of new media art, contemporary art, and trans-disciplinary work. She was the Executive Director of Eyebeam Art and Technology Center from late 2005 to 2011. She has curated exhibitions, screenings and events that have been presented in New York, Australia, Canada, the UK, New Zealand, and Korea. Her contributions to the field of electronic art also include her work as Executive Producer of the 2004 edition of ISEA, which was held in Tallinn, Estonia and Helsinki, Finland, and on a cruiser ferry in the Baltic Sea. She was also Director of the Australian Network for Art and Technology (ANAT) and later, Associate Director of the Adelaide Festival 2002 where she was co-curator of the exhibition conVerge: where art and science meet. She has worked throughout Europe and Asia, holding residencies in Berlin, Germany (1994/5), Banff Center for the Arts, Canada (2002) and at The Sarai Programme at CSDS in Delhi, India (2002/3). Amanda is also a Board member of NAMAC (National Alliance for Media Art + Culture).

About the Austrian Cultural Forum New York
With its architectural landmark building in Midtown Manhattan the Austrian Cultural Forum New York is the cultural embassy of Austria in the United States. It hosts more than 200 free events annually and showcases cutting-edge Austrian contemporary art, music, literature, and academic thought in New York. The Austrian Cultural Forum houses around 10,000 volumes in its state-of-the-art library, and enjoys long-standing and flourishing partnerships with many venerable cultural and academic institutions throughout New York and the United States. The year 2012 marks the ten-year anniversary of the building's construction, and features many special programs and events commemorating this milestone.

Claudia Schmied, the Austrian Minister for Education, Arts and Culture will be present to officially open the show. The opening will be preceded by an artist talk featuring participating artists Sabine Bitter, Judith Fegerl, Mathias Kessler, Fabian Patzak, Rainer Prohaska, and curator Amanda McDonald Crowley. The talk will take place in the auditorium of the Austrian Cultural Forum from 5 to 6pm. A cooking performance by artist Rainer Prohaska will take place in the kitchen he has installed throughout the ACFNY's gallery from 6 to 7pm. Free admission for the artist talk and performance. Due to limited seating, rsvp is required. Tickets are available by visiting the exhibition page or calling 212 319 5300 x46.