Inspired by traditional landscape painters, Sven Kroner lushly paints scenes of flora and fauna. Martha Mysko's work at times brings to mind a screen of a bad TV where the image flickers between reality and fantasy. 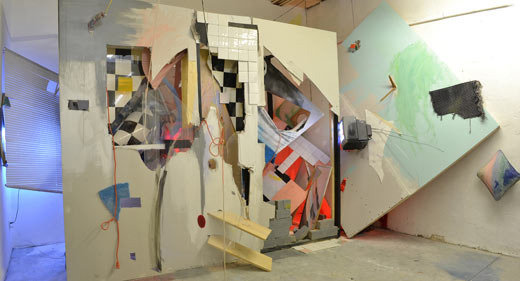 At first glance, the work of Sven Kroner may seem like a simple tribute to nature. Inspired by traditional landscape painters such as Jacob van Ruisdael and Caspar David Friedrich, Kroner lushly paints scenes of flora and fauna, while loose brush strokes haze the environments in moss greens and bright ochres.

Kroner draws subjects in part from his childhood in the forested Allgaeu Mountains in the south of Germany, and also from the imagined world in which Kroner alone inhabits. Never having seen, for example, an aerial view of a ship breaking icebergs, or surreal cavernous crop circles in remote desert locales, he paints from a pastiche of pop culture tropes, nostalgic musings, and idealized other-worlds.

While it is easy to place a moralized message on to the work of Sven Kroner, an artist whose works almost never feature humans and, in their stead, the relics of their destruction, that's not exactly his intention. By placing things in an unidentifiable land, and rendering the impossible with such meticulousness, he's more concerned with blurring the boundaries between truth and falsehood, and dissolving the essence of time and location.

Sven Kroner was born in 1973 in Kempten, Germany. In 2000, the artist graduated from Kunstakademie Düsseldorf. His solo exhibitions include Sies + Höke Gallery - Düsseldorf (2011), Galerie Fons Welters - Amsterdam (2011) and Yvon Lambert - New York (2008). Museum exhibitions include the Zuiderzee Museum - Netherlands (2012) and the Hudson Valley Center for Contemporary Art - Peekskill, NY (2007). He lives and works in Düsseldorf.

MARC STRAUS is pleased to present an exhibition of new work by Martha Mysko on the occasion of her first solo exhibition.

Martha Mysko uses desolated materials to create restless compositions that upon close inspection are deluged in harmonious abstraction and beauty. Mysko's work at times brings to mind a screen of a bad TV where the image flickers between reality and fantasy. Discarded electronics, lumber, furniture, and masonry are the tools of her trade. Her acquisitions distinctly become her own language; checkerboard flooring, pillows, textiles and drywall are among her materials, hand painted to create just the right environment.

Her work investigates the current state of consumerism with a critical eye, but concurrently derives from and depends on it; one man gathers what another man spills. Mysko creates her own space, sometimes wall bound two-dimensional objects, other times complete environments that entrap. These constructs remind of Jessica Stockholder but Mysko, a generation later, is less entropic. Indeed her work seems incomplete without people - without us. Material objects have redefined their purpose, as individual creations full of form. A Rubik’s Cube only has one solution, but the steps to get there vary greatly.

Sometimes it just takes an art ist to show us the way to solve the puzzle. Martha Mysko was born in Baltimore, Maryland in 1982, and received her MFA in Painting from Cranbrook Academy of Art in Michigan in 2011. She was an artist in residence at The Homestead AK in Alaska (2009) and Takt Kunstprojektraum in Berlin (2008). Mysko has exhibited throughout the United States, and in Austria and Germany. The artist currently lives and works in Brooklyn, New York.