One and Many Actions. Projects dedicated to the artistic practices which looked for confluence between art, experimental music, new dance and theatre. Anarchic, freeing and even heroic gestures of the art of '60s and '70s, their's theatricality and subversiveness still echo in the practices of the younger generations. Works by John Cage, Yoko Ono, Maurizio Cattelan, Vanessa Beecroft, Francesco Fonassi, Nicola Ruben Montini and many more. 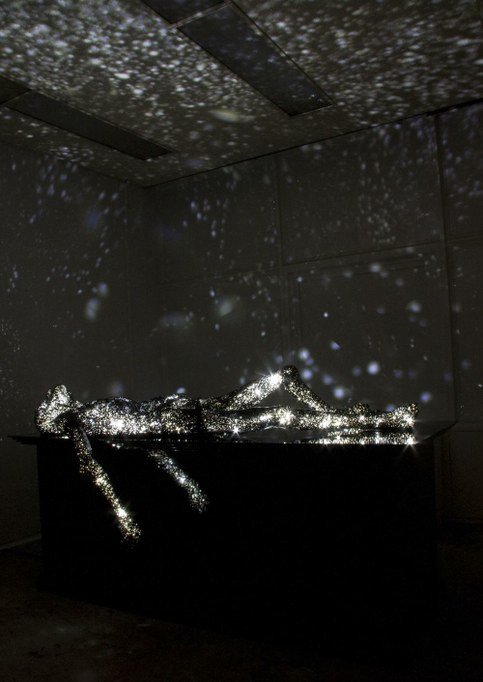 Life, life itself... is the absolute art!

When Yves Klein pronounced this words for the first time they were highly provocative. Not only they undermined conventional notions of art, they also anticipated all those artistic strategies which, on the turn of ‘60s to ‘70s, expanded to the highest extent boundaries of art, seeking to merge it with all other expressive languages.

Theatre of Life: One and Many Actions is exhibitive project dedicated to this artistic practices which looked for confluence between art, experimental music, new dance and theatre. It aim to highlight those practices that, not only blew boundaries between mentioned disciplines, but most of all challenged social conventions in search for alternative models of art and life, announcing and propelling liberating energies that shook the world in the late ‘60s and early ‘70s.

Fluxus, performance, body art and all those tendencies that put the focus on the action and on the body (of the artist) as the subject and the object of an artwork should be a point of departure for the exhibition which aims to explore ways in which younger generations are addressing the same topics. Anarchic, freeing and even heroic gestures of the art of ‘60s and ‘70s, their’s theatricality and subversiveness still echo in the practices of the younger generations, even though the emphasis today seems to be more on repetition than on uniqueness, as well as on the re-enactment as the strategy for expressing the new. Why redo? Why re-perform? What are the motivations that drives artists, especially those of the younger generations, to re-visit works/actions done decades ago?

This would be the one, but not the only focal point of the exhibition. Another would explore dichotomies action/inactivity; motion/stillness, presence/absence.

Silence, slowness, minimal gestures are common features recognisable in the works of younger performers, and this show would like to investigate how reduced expressive language is capable of producing intense and involving artistic statements.

Departing from some of the topical works by Yoko Ono, Valie Export, Marina Abramovic or Natalia LL, this show should be like a voyage through the multiplicity of “bodyscapes”, which might be static or in motion, live or on film.

Theatre of Life will be also a journey through challenging and provocative statements through which contemporary artists (Cattelan, Beecroft, Vezzoli, Kozyra, Montini, Haring) addressed conventions of patriarchal society, political or religious authorities, sexual freedoms as well as art-taboos. The show will be enriched by monumental work from Unicredit art collection, Partrick Tuttofuoco’s Chinese Theatre: an auditorium in which will be screened selection of interconnected works by John Baldessari, Joao Onofre, Jonathan Monk and Pierre Bismuth, which will function as exhibition within an exhibition.

For the evening of opening, on 18th of May, and for the whole next day, Saturday, 19th of May, exhibitive spaces of CoCA will be animated by numerous live performances which will turn the museum and exhibition in a “total performative event” which will include artists as well as the public.

Theatre of Life is a second in a series of exhibitions started in 2011 with Spaceship Earth and it will be accompanied by a catalogue with essays by the curator Dobrila Denegri, historian of art and philosophy Thomas McEvilley, art-historians and curators Cristiana Perrella and Piotr Lisowski.

Exhibition will be accompanied by series of lectures and presentations by younger artists who are taking part in the show: Gil Kuno, Nezaket Ekici, Marlene Haring, Malin Ståhl, Branko Milisković, Francesco Fonassi, and Nicola Ruben Montini.

On the 19th of May (Saturday) at 6:30 pm, as a special event, open to the large public, there will be organized a lecture, led by Achille Bonito Oliva, one of the most famous Italian art critics, father of Transavanguardia. During the event entitled: Tribes and tribal leaders of the Art shall we go through the history of groups and movements such as Fluxus and Happening, Gutai and Mono-Ha, Lettrism and Situazionism, with a special tribute to the one of the "greatest leaders" – John Cage, whose centenary of birth and twenty years of death we are celebrating this year.

There is also a unique opportunity to become part of Yoko Ono's work! One of the works in the exhibition Theatre of Life is an installation Yoko Ono My Mommy is Beautiful. The work starts its own life from one paper written by the artist and placed on the wall. Viewers are meant – according to the guideline Yoko Ono – write a few words about theirs mothers (not excluding more negative memories), attach a photo or drawing. All items will be placed on the wall, and after the show – the work will go to the archive of the artist. We encourage you to participate!

European Night of Museums: Saturday, 19th of May 2012 from 12 am to 12 pm, free entrance for intense program of performances, guided tours and lecture

Special event of European Night of Museums: lecture Tribes and tribal leaders of the Art, led by Achille Bonito Oliva, 19th of May at 6.30 pm, Cinema in CoCA