Public Tender. The artist explores the relationships between sculpture and architecture based on an action in the building designed by Richard Meier in which she returns it to its original appearance. The exhibition features highlights of her sculptures that have been chosen for their specific ability to elicit questions that address public production and perception of culture. 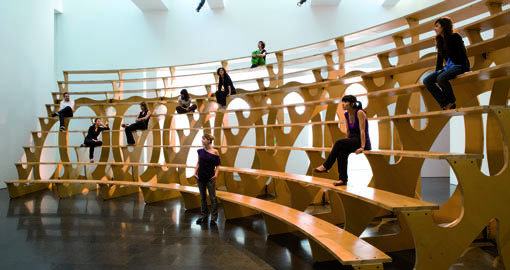 Oferta publica / Public Tender is the first major presentation of Rita McBride’s work in Spain. In this exhibition, McBride re-examines the conceptual strategy made famous by Michael Asher in 1973 at his seminal exhibition at Galleria Toselli in Milan, where he sandblasted the gallery walls removing layer after layer of white paint to reveal its original pre-art brown patina. McBride expands this act of purification at the MACBA by removing most the museum’s temporary walls, skylight coverings, and door closures added to the museum architecture since the original opening 17 years ago. The result is dramatic in the way it shows how institutional space is modified by time and necessity.

In a direct dialogue with the building’s architect, Richard Meier, the artist has returned most of the museum’s second floor to its initial and intentional state. This cleansing of the architecture puts the exhibition space on view as an object of study, putting it at par with the artworks it houses. With this bold intervention McBride has carefully re-constituted an environment in which art and architecture are synonymous. The artist’s excavation of the struggle between the inner workings of the museum and its architecture creates a powerful transparency, re- establishing the connection between the public function and the museum’s day to day custodial operations.

Within the new ‘cleansed’ exhibition spaces McBride has inserted five projects, each dealing in a different and profound way with the concept of art in ‘public’ space. Divided between two different galleries, McBride has rebuilt the ground ‘service’ floor of the Villa Savoye (1929-1931), Le Corbusier’s masterpiece of domestic machine architecture in Poissy, in the suburbs of Paris. By using this full-scale model of the Villa as exhibition space for several of her smaller works, McBride asserts the powerful difference between ‘public’ and ‘domestic’ architecture and their very different capacities to be exhibition space for art objects. In the context of the Villa we find works such as Double Helix Spiral Staircase (1990), a spiral staircase made of rattan; Glass Conduits (1999), made of Murano glass; and Servants and Slaves (Domestic) (2003). Within the typology of the Villa’s servant spaces, garage, kitchen, laundry room and entrance reception, McBride reminds us also of the historical relationship of class struggle in the machine age, subtly reminding us of the intrinsic ethical properties of architecture and the political agenda of the architect.

In the diaphanous main exhibition gallery, is Arena (1997), an enormous circular tribune made of bullet-proof twaron and wood. Despite its imposing size Arena speaks to the viewer of its intrinsic portability and modular flexibility. The work has been built and rebuilt over the last decade in museums and exhibition spaces all over the world, always adapting itself to the local contingencies. Arena serves to invert the roles of audience and actor, creating a new ultra-democratic viewpoint of the museum architecture as well as de-constructing the very concept of Institutional Critique, a concept developed by artists such as Michael Asher and Hans Haacke in the late sixties and early seventies. The visitors to the MACBA will be invited to experiment by choosing different places to sit on Arena at which point the hierarchy of the museum is put into question as visitor becomes object of exhibit, watcher becomes watched and the architecture of the museum reveals itself infinite ways.

McBride has introduced two new architectural elements in the final gallery of the exhibition in the form of a thick chrome-like column paired with a white rectangular one, standing uncomfortably close to one another. The columns seem to carry the weight of the whole museum structure and stand as a surrogate for the artist herself. They represent McBride’s career-long engagement with deconstructing the language of architecture, and resolving in some way the contradictions between ‘sculpture’ and ‘architecture’ in the public milieu.

Mae West is a 52-meter tall structure, shaped as a rotational parabola and completely constructed of carbon fiber tubes, making it the largest public artwork in Europe. The work was a result of a commission by the city of Munich, Germany and completed in 2011. Mae West is McBride’s definition of the difference between ‘sculpture’ and ‘architecture’. In the exhibition, McBride exhibits Mae West 52-meter Drawing (2010), a one to one drawing in progress. A plotter will work daily during the exhibition to produce a one-to-one scale drawing of the Mae West tower. Alluding to Jorge Luis Borges’ short story On Exactitude in Science about a society that finds the need to create a map of their country the same size as the country itself, McBride defines the public nature of site-specific sculpture and its essential animosity to the museum. Like Robert Smithson’s Non-Sites series of the 1960s the museum becomes an anathema to artwork that truly exists in the world.

A final element to McBride’s investigation of the concept of ‘public art’ is the first screening in Spain of the film Day After Day (2011), directed by Alexander Hick, which documents 24 hours in the life of Mae West and the local response to the sculpture.

Publication: Rita McBride. Oferta pública / Public Tender
Commissioned by Rita McBride, the German photographer Anne Pöhlmann has for the last year been taking pictures periodically of the MACBA display halls at times when the exhibitions were being installed or disassembled, when these spaces lose their identity and their architecture is transformed. This photo monitoring process ends with the Rita McBride exhibition and becomes a photo essay, which is completed with texts by the architects Mark Wigley and Luis Fernández-Galiano on a diverse range of aspects related to McBride’s work.

The publication has been designed by Sandra Neumaier and will appear in mid-July.