The fifth edition contains the main exhibition curated by Anne Barlow, with the theme 'Tactics For The Here And Now' and a series of parallel events. It profiles the work of artists whose agency lies less in overt statements, but rather in investigative or indirect strategies that possess their own kind of power. Several projects involve a reworking of specific histories from the civic to the personal, producing a different kind of 'knowledge' that is not always about nostalgia or narrative, but is rather a deliberately constructed perspective on the contemporary. 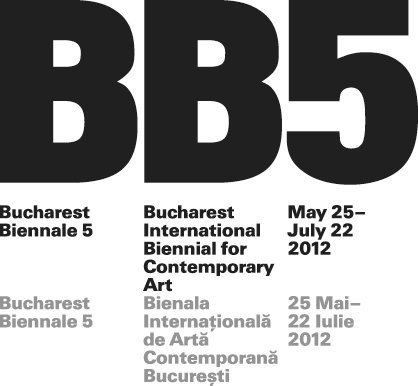 Within the current context of the shifting nature of politics, economics, and culture — conditions that are increasingly referred to as precarious times—artists often have to negotiate risky positions, con- tested territories, or situations in which cultural activity interacts with, or provides a counterpoint to, conditions of flux. Bucharest Biennale 5 profiles the work of artists whose agency lies less in overt statements, but rather in investigative or indirect strategies that possess their own kind of power.

By its very nature, work that is investigative expresses a kind of resistance to both the speed and changing nature of things and the increasing sense of instability that pervades everyday life. Several projects in the Biennale involve a reworking of specific histories from the civic to the personal, produc- ing a different kind of "knowledge" that is not always about nostalgia or narrative, but is rather a delib- erately constructed perspective on the contemporary. For some, the act of researching, uncovering, and presenting things that are below the surface has been aided by the Internet, whereby obscure or otherwise concealed data may be sought out, enabling new combinations of imagery and meaning that are open-ended or associative in nature. Whether relating to symbols of former eras, or person- al or collective memories, these images are complex representations of past and present — imagina- tive ‘spaces’ that are characterized by a degree of uncertainty that make them more challenging to decipher.

For other artists in the Biennale, tactics of subterfuge or infiltration are intrinsic to their practice, allow- ing them to circumvent or negotiate existing systems that they find questionable or challenging. Their methodology reflects a practice that is evolving, dynamic and responsive, something that is essential for situations that change quickly or are not yet fully understood. Often using techniques that rely on the art of seduction or manipulation, these works can still contain sharp social or political critique, merging aesthetics and political and cultural commentary in ways that initially mask underlying mean- ings.

(excerpt from "Tactics for the Here and Now" by Anne Barlow, published in PAVILION #16 - journal for politics and culture, edited for Bucharest Biennale 5)

Anne Barlow (born in Glasgow, Scotland) is Executive Director of Art in General, New York, a non-profit organization that supports artists through the commissioning of new work and an international residency exchange program. From 1999-2006, Barlow was Curator of Education and Media Programs at the New Museum, New York, where she oversaw its educational and public programs, conceived of and developed Museum as Hub (a global network initiative that connected the museum with art partners in Cairo, Eindhoven, Mexico City and Seoul), organized inter-disciplinary roundtables with leaders in the fields of the visual arts, architecture, and design, developed the museum's Digital Culture Programs, and curated numerous exhibitions and performances. Barlow received her M.A. in the History of Art from the University of Glasgow, Scotland. Prior to moving to New York, Barlow was Curator of Contemporary Art and Design at Glasgow Museums, where she managed its contemporary art collection, exhibitions, residencies and commissions programs. Independently, she collaborated on the exhibition Copy It, Steal It, Share It at Borusan Art Gallery, Istanbul, and guest-curated film and media projects for the International Film Festival Rotterdam, the Netherlands, and Threshold Artspace, Scotland. Barlow has published for organizations including: Liverpool University Press/Tate Gallery Liverpool; the Henry Moore Institute, Leeds, United Kingdom; the Edith Russ House for Media Art, Oldenburg; the New Museum; and Art in General. She recently co-organized Art in General's international residency/exchange symposium What Now?, and has participated in lectures and discussions at organizations including: the Royal College of Art, London; Centre for Contemporary Art, Warsaw; MUMOK, Vienna; The Cooper Union for the Advancement of Science and Art, New York; New York University; ARCOmadrid, for Latitudes' Professional Encounters; Tate Modern, London; and the Sharjah Art Foundation.

PROGRAM OF THE OPENING DAYS

13.00 - 19.00
BB5 PREVIEW
All venues will be open exclusively for press and professionals based on accreditation only

24.00 (invitation only)
Special DJ Stars Line Up: CLIZA vs LEO

22.00
PARTY (free entrance)
Informal party to celebrate the artists, the curator of BB5 + our guests and the team of the biennale.
Venue: OTA (the most famous underground artsy place)
Str. Dr. Staicovici nr. 26, Bucharest (no sign on the entrance, enter the garden and in the back downstairs)
Good vibes provided by DJ Pericle
Metro: Eroilor

On May 25, The White Night of The Galleries will take place. For the program: www.noapteagaleriilor.ro