Sofie Thorsen presents three major, inter-related complexes of works from the past three years. Her work vacillates between recognisable representation of reality and possible fiction. Marc Bauer takes on the theme of nature and the associated territorial ideas, whereby he deals specifically with the forms of appearance and significance. 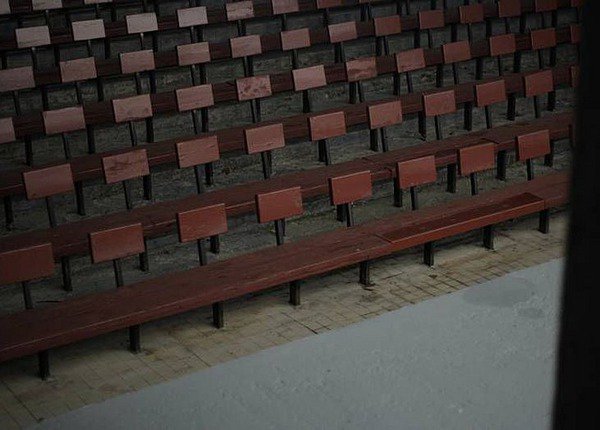 The Kunsthaus Baselland is pleased to present the first institutional solo exhibition by the Danish artist, Sofie Thorsen (*1971 in Århus, Denmark, living in Vienna since 1999) in Switzerland. The artist studied at the Danish Academy of Fine Arts and at the Academy of Arts in Vienna and has attracted attention in the last few years with solo exhibitions in Kunstverein Düsseldorf (2011), in Kunsthaus Langenhagen (2010) and in The Århus Art Building (2009).

The exhibition, Schnitt A-A (Cut A–A), is a collaboration with the Kunsthaus Graz, where a slightly different version was presented earlier this year. The film Schnitt A - A from which the exhibition derives its title, serves as a basis for the trailer to the Diagonale 2012 Film Festival in Graz.

In her solo exhibition at the Kunsthaus Baselland, Sofie Thorsen presents three major, inter-related complexes of works from the past three years. In the most well-known of the works, The Achromatic Island (2009), the question of seeing and recognising is in focus. The film is based on the history of the Danish island, Fuur, where up to the 1930s numerous inhabitants had increasingly been afflicted with genetic achromatopsia or complete colour blindness for generations. With the inclusion of interviews, texts, photos and moving pictures in haunting black and white contrasts, Thorsen illustrates the landscape and everyday life of Fuur from the perspective of those with this unusual impairment. The condition, conducive to the questioning of perception in general, serves the artist as a conceptual ‘seeing machine’ and provides a possible model of experience with discernible contrasts of sight. Thorsen’s work vacillates between recognisable representation of reality and possible fiction - thereby opening new realms of association to the viewer.

The second topic complex is grouped around the so-called 'Spielplastiken' (play sculptures) (2010/11), which as drawings and collages focus on forms of presentation. The works deal with an “art in public space” programme - part of a rebuilding project after the second world war - a framework in which artists were invited to develop sculptures for numerous children’s playgrounds in Vienna. The sculptures attract attention due to their utopian form and colour scheme unusual to a dismal Vienna of the 1950s. They were also functional, aside from being sculptural and architectural forms, to be used by children as play installations. So here too, Thorsen’s diminution of the structures to purely illustrative characters results in a dissociation of place and situation, analysed through the medium she uses.

The latest work complex reflects on the utopian spirit of socialist modernism and a tendency to museum-like, romantically inclined and disgraced cinema. The complex is a long outline of shadows, which progress to seemingly legible symbols and the associated title-lending film, "Schnitt A - A". As a formal highly precise passage through the depths and chasms of the exhibition area, it is devoted to the cinematic language of the transcending light as well as to an abstracted restoration of a look at the expressiveness of the architectural form. The complex thereby is obliged to the tradition of expanded cinema with its holographic penetration of space, as well as its conceptual collages and the accompanying mentally charged nature of objects. The film will debut in its place of origin in autumn 2012 - in the open-air cinema of the Museum of Modern Art in Bratislava - before it is torn down as planned and buried in oblivion.

With the exhibition "Nature as Territory" at the gallery, the Kunsthaus Baselland is happy to devote a solo exhibition to the Swiss artist Marc Bauer (born 1975 in Geneva, lives in Berlin). Marc Bauer, who studied at the Ecole Supérieure d’Art Visuel in Geneva, has in recent years been augmenting his career constantly with numerous exhibitions at home and abroad.

In addition to solo exhibitions at the Kunstmuseum St. Gallen (2010), the MAMCO (2009) and attitudes (2001, 2007), his drawings were also exhibited in Beirut (Beirut Art Center, 2011), Clermont-Ferrand (FRAC Auvergne, 2009) and at the Art Basel (Statements, 2008). The artist was also one of the three nominees for the endowment prize awarded by Daniel & Florence Guerlain.

For Marc Bauer, personal memories, historical events and their documentation, such as photographs of his grandfather during the Second World War or the stories of historical figures, always become the starting point of his pictorial contentions. The artist draws in different formats and presents the drawings sometimes in classical frames and sometimes in the form of installations. Time and time again in the thematic series, the historical and the personal merge with fiction, thematic immersions with personal interpretations, the seen and the experienced with the imagined. “This merger is the basis for a reflection on subjectivity, which is based both on the way we organise our own memories and the way in which a collective memory appropriates events, so they can be linked in such a way that the so-called 'history' emerges from it” (Jean-Charles Vergne).

For the exhibition at the Kunsthaus Baselland, Marc Bauer takes on the theme of nature and the associated territorial ideas, whereby he deals specifically with the forms of appearance and significance. Thus the idea of island has the connotation of ​​refuge, hope, or an idyllic holiday season for most people. That an island can also be a contrary symbol has been proved by the attacks of the extreme right-wing murderer Anders Breivik Behring on the Norwegian island Utoya, where some seventy people lost their lives. In his latest series of art-historical models, Marc Bauer incorporates especially the island drawings of Paul Thek (1969), or fictitious, imaginary island motifs which we associate with the beautiful, just like the island Utoya which has become the epitome of human evil, which also encroaches nature as its territory. The ambivalence of the beautiful and the gruesome has often occupied the artist: “I am always under the impression that one is lying to me and all that is beautiful in reality conceals something rotten behind it.”

Drawings were made on white lacquered aluminium base for the first time, especially for the exhibition at the Kunsthaus Baselland, which make the individual strokes particularly striking. Based on the subject, the artist uses picturesque transitions and shapes that arise with targeted eraser smudges. In this way an island motif can emerge both as a decorative ensemble of strokes, lines and braids and as an illustrative access to a more scientific, factual and sober presentation. Bauer always makes room in his thematic debates for deviations or breaking points, which lightly touch the theme chosen by association or have nothing at all to do with it. The drawing, which shows the wood carver Gepetto and his wooden statue Pinocchio come to life on the run emerging from the belly of the whale, is thus a thematic breaking point, which as a whole presents itself as a rhizome branching. Another drawing is installed on the wall in such a way that it can be moved into the room. On one side you can see a large-format wave, which in its design shows places that reflect, places that further develop playfully from a motif and create a variant. The amazing web of lines, dashes and blurs combines into a kind of pattern, in whose separate parts the recipient is lost. The other side of the screen-like drawing shows a schematic representation of the famous modernist Villa Savoye designed by Le Corbusier. For Marc Bauer the format Zeichnung (drawing) and the respective thematic focusing is a genuine expression of his particular arguments, a snapshot of his work. Each drawing captures a specific facet of these moments, which oscillate between the unambiguous and the invented, the known and the imaginary, the scientific and the decorative, the finished and the unfinished.