The Portuguese artist duo Joao Maria Gusmao + Pedro Paiva themselves call their work 'recreational metaphysics'. They are showing new films and a space-filling camera obscura: a range of thematic constellations that are combined into a kind of dream landscape. Recent accessions to the collection of the Glarner Kunstverein: from classical portrait painting through photography to abstract-geometric and also motor-sawn sculpture. 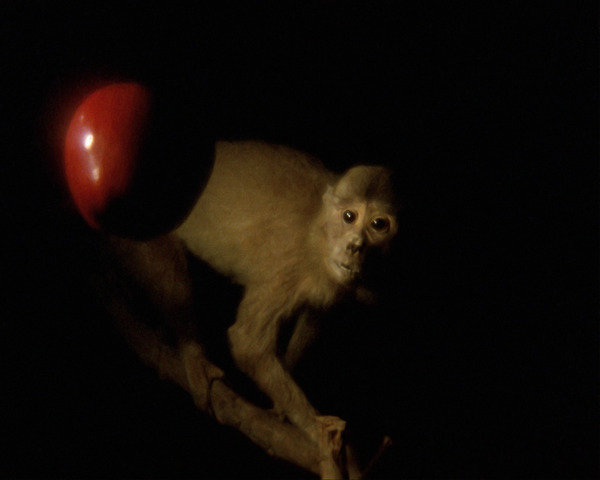 Joao Maria Gusmao + Pedro Paiva
Those animals that, at a distance, resemble flies

The Portuguese artist duo João Maria Gusmão + Pedro Paiva (b.1979/1977, living in Lisbon) themselves call their work “recreational metaphysics”. In their first solo exhibition in a Swiss institution, the artists are showing new films and a space-filling camera obscura at Kunsthaus Glarus. The artists have arranged groups of work especially developed for this exhibition in a range of thematic constellations that are combined into a kind of dream landscape. With a particular sense of humour they use optical devices and obscure experiments to challenge human understanding and thus bring up many kinds of questions about how the real is projected in art practice. The artists also follow this principle of illusion with the camera obscura, which they use to produce imaginary images, which, like their short films, inquire into the logic of illustration and at the same time reflect on the complexity of image productions. The themes are many and vary in kind from anthropological-enlightenment, experimental-artistic and philosophical-magical. They thus evoke sometimes scientific sometimes absurd and then again dream worlds.

The exhibition is taking place in cooperation with the Fri Art Centre d’art de Fribourg, where a second part of the exhibition will be shown from 8 September - 26 October, again including new works.

Gusmão + Paiva produce their short films with the simplest means and without sound. They work with amateur actors and create special effects without large-scale technical equipment. The aesthetics of their films remind one of silent films or the classical slapstick cinema of the twenties, but they repeatedly refer as well to early scientific documentaries. An important source of inspiration for the Portuguese artist duo can be found in the literature of the little-known French writer René Daumal (1908-1944), who used his “Abissology”, a fictitious science of the abyss, to criticise the loss of myth in modern society and to search anew for a sense of spirituality. As in Daumal, the films, photographs and sculptures of Gusmão + Paiva overlay scientific information with surreal, inexplicable appearances, which artistically visualise the incomprehensible and the unimaginable. In their films a subtle magical realism unfolds, giving rise to questions about the epistemological systems of our perception. Their works suggest mistrust of the idea of a universal truth or history and lead to an alternative view of the world somewhere between science and myth, where the rational search for knowledge using technological means is blended with surreal perception.

For the Kunsthaus Glarus the artist duo is producing a series of films concerned with the themes most relevant to film: movement and time. They create disconcertingly puzzling concepts of time and space and thus question the epistemological foundations of human perception. The various works also point up multi-layered relationships within the history of art, photography and film. The extreme slowing down of the moving image in documentations of simple phenomena is reminiscent, for example, of the chrono-photography of Eadweard Muybridge (1830-1904), one of the early fore-runners of the film medium. The re-enactment of Muybridge’s photo series Getting into Bed (1887) results, in the case of Gusmão + Paiva, in a kind of reversal of the film medium. While Muybridge tried in many studies of human and animal movement to simulate movement from single photographs, in the case of Gusmão + Paiva it is a matter of slowing down the moving image and almost bringing it to a standstill and consequently of a dream-like veiling of phenomena with film technology. This procedure aims at a shift in perception and a concentration on the enigma of the existence of things.

Several times in this exhibition Gusmão + Paiva focus on path-breaking discoveries in research into the world and its physical laws. They do so, for example, in the film 15,000 Year Old Lunar Calendar (2012), in which an abstract design is painted on the shell of a turtle (the common symbol of slowness) and makes reference to the earliest drawings of a lunar calendar in the caves of Lascaux in the Dordogne, France. Another film, entitled Darwin's Apple, Newton's Monkey (2012), amalgamates references to Charles Darwin’s (1809-1882) theory of evolution and Isaac Newton’s (1642-1726) theory of gravity in a reversed, in other words absurd, manner (Darwin was concerned with the evolution of apes, Newton with the fall of apples). In the film an apple falls in slow motion before the eyes of a taxidermied monkey.

Another point of reference, which questions purely rational systems of epistemology, is to the fantastic literature of Jorge Luis Borges, whose essays postulate repeatedly the redundancy and ultimately the annulment of all principles of order and classification. In his essay “The Analytical Language of John Wilkins” (1942), he described an alternative classification of animalia in a fictitious Chinese encyclopaedia. He sorted the animals into fourteen categories. The last of these absurd categories was made up of animals that resemble flies when seen from a distance. With the exhibition title and the eponymous 16mm film Those animals that, at a distance, resemble flies (2012) the artist duo refers directly to this invented alternative classification system of Borges. With the work of the same name focusing on the slowing down of the flight of bees, which the human eye can normally never see in this way, at the same time the reversal of the movement into distance, namely the zoom, joins the discussion. In a camera obscura in the Seitenlichtsaal a moving projection of abstract forms is conjured up on a screen, which results, on the one hand, in a play of light and forms and, on the other – like Borges’s flies – refers to an established principle, that of Euclidean geometry. This says that the corners of a right-angled body appear rounded as the distance increases.

Such conjunctions of removed objects that show deficiencies in clarity at a distance and very tiny things situated directly in front of the viewer’s eyes and yet normally remain unnoticed, are focal points of this exhibition. A glance at the phenomenology of things, therefore, which always lies outside the normal range of the human eye and which therefore demands repeated adaptation of our minds and a consideration of the boundaries of our perception. João Maria Gusmão + Pedro Paiva sharply experiment with visual principles, analogies, reversals and repetitions and the confrontation of images with intellectual concepts. They allure us into a journey to the realm of the absurd, unintelligible and puzzling. They invite us to take part in their visual experiments and at the same time are quite remote from any theoretical discourse or strict referential framework.

João Maria Gusmão and Pedro Paiva have been working together on short films, sculptures and installations since 2001 and in 2009 they represented their country at the Venice Biennale. Their works have been seen in solo exhibitions at the Kunsthalle Düsseldorf (2011), the Ikon Gallery, Birmingham (2010), the Mercer Union Centre for Contemporary Visual Art, Toronto (2009), the Kunstverein Hannover (2009), the CCA Wattis Institute for Contemporary Arts, San Francisco (2008) and the Museu de Arte Contemporáneo de Castilla y León (2007). In group exhibitions they have participated, for example, in the Art and Philosophy Exhibition in the Neuer Berliner Kunstverein (2011), in the Experimental Station exhibition, Research and Artistic Phenomena in the Centro de Arte Dos de Mayo, Mostoles, Madrid (2011), in the Magic Show, a travelling exhibition of the The Hayward Gallery, London (2010), in the exhibitions Leopards in the Temple, Sculpture Center, New York (2010), at the 53rd Biennale di Venezia (2009), at Manifesta 7 – European Biennial of Contemporary Art in Rovereto (2008), VI Bienal de Mercosul, Porto Alegre (2007) and the XXVII Bienal de São Paulo in São Paulo (2006).

Recent accessions to the collection of the Glarner Kunstverein

In the two exhibition spaces on the lower floor after last year’s exhibition another group of purchases of the Glarner Kunstverein as well as long-term loans are shown, which have found their way into the collection during the past fifteen years. This time works are brought together that have a variety of references to the human figure. While portrait painting in the 19th century served to represent a person or document a social reality, in the 20th century and the present the genre changed its basic character in the direction of a search for identity, which has been increasingly characteristic of modern man. The range of ways in which the human body is shown in this exhibition extends from classical portrait painting through photography to abstract-geometric and also motor-sawn sculpture. The human body is shown as a universal theme, which still has great immediacy today and reflects the sensitivity of this age like almost no other.