How Do We Know What We Know? The two recent films, as well as research material for his new feature-length documentary film, examines the work of 'classical' journalism, the kind that relies mostly on rarely contested reports from the field by war correspondents. 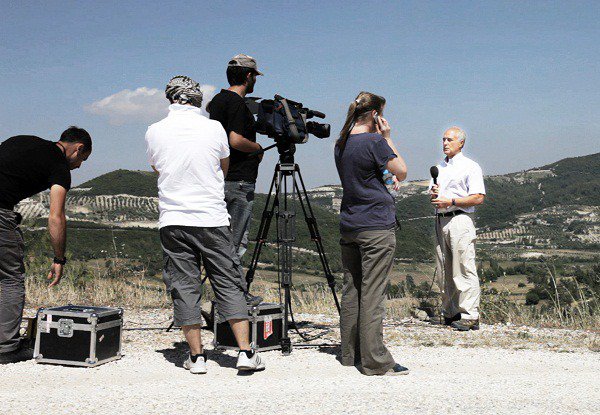 Images are the tools and weaponry of warfare. In itself this is not new, but what is undoubtedly new is the way their sources have multiplied. Now, then, is a propitious moment for examining the work of "classical" journalism, the kind that relies mostly on rarely contested reports from the field by war correspondents. The entire edifice around this media coverage already seems a little out of touch and may soon be left behind: special correspondents, TV crews, satellite trucks, hotels full of war correspondents, news flashes and breaking news, the news show's dramatic jingle...

What is a "good" image of conflict? Where are they made and how will they be made tomorrow? How can we critique them with other images? Media production and dissemination create systems in which we are caught and to which we contribute more or less voluntarily. What we can try to describe are the details of these systems, sometimes benign in appearance, as a way of thinking about them and perhaps of loosening their grip.

The exhibition at uqbar will feature two recent films by Emanuel Licha, as well as research material for his new feature-length documentary film.

In /How Do We Know What We Know?/(2011, 17 min), the journalist in the studio talks to the special correspondent who couldn't get into the conflict zone that is the topic of the news report he put together out of amateur footage. Just a few years ago, one still heard it said that the media decided when a conflict started: it began the moment journalists arrived on the scene. The rapid growth in the amount of images shot by the protagonists themselves, in combination with their almost immediate broadcast, has modified this equation. Shot at the turkish-syrian border during the early moments of the Syrian uprising, the film reflects on how images of conflict are built.

/Mirages/(2010, 20 min) focuses on a mock Iraqi village in the middle of the Mojave desert in California. Conceived and used by the US Army for the training of the troops before being deployed in Iraq, this village was built and is operated by Hollywood professionals. The extras playing the roles of the inhabitants are hired among members of the Iraqi diaspora in the US. This training facility is an optical device. It is used not only to train soldiers for combat, but also as a device to guide their gaze. It familiarizes them with the "reality" of Iraq, as it is fictionalized by the Army and Hollywood. Soldiers are trained to recognize the enemy, to differentiate the "good people" from the terrorists and taught that every Iraqi is a potential enemy. It is also used as a narrative tool to produce a war utopia, through operations of framing and the training of the viewer via the media workers who are welcome to cover the activities of the facility.

When they visit this mock Iraqi village, journalists are housed in a hotel that is part of the simulacrum. This is where the film crew stayed when shooting /Mirages/. This experience leads to the idea of further investigating the roles and functions of hotels in warfare. The project /Hotel Machine/is actually in production, and the exhibition at uqbar displays some introductory material such as a film teaser and a series of small photographs of interiors of some of the "war hotels" that will appear in the film. "War hotels"are spaces where journalists are able to interact with other protagonists of the conflict: politicians, negotiators, experts and military officials, but also other journalists. This is also where images of war are fabricated and from where they are put in circulation, and where a certain "truth"about war is produced and replicated.

The two films and the teaser are presented as a single projection in a continuous program. The experience of the spectator is interrupted every five minutes by an invasive music: the audio piece /Jingles/(2011) features brief audio jingles from the news program of major TV networks, such as BBC or Al-Jazeera. These loud musical interludes interfere with the spectator's experience, as reminders, like a cuckoo clock would do, of time passing and the continuous occurrence of world events. Those news programs punctuate our days, and at uqbar they also punctuate (and disturb) the spectator's visit.

The exhibition takes place in cooperation with the Embassy of Canada in Berlin.
The artist thanks the Canada Council for the Arts for its support.

*Emanuel Licha* is an artist and filmmaker. His recent projects enquire into the means used to observe and report on violent and traumatic events. After obtaining a master's degree in urban geography, Emanuel Licha studied visual arts at Concordia University in Montreal and the École nationale des beaux-arts in Lyon. He teaches film practices at the École nationale supérieure d'architecture de Paris-La Villette and is a PhD candidate in Visual Cultures at Goldsmiths College, University of London.