Correspondence. On show new works. The German artist conflates photography and cinema to produce psychologically charged vignettes and re-photographed film stills merged with staged shots taken in and around her home and studio. 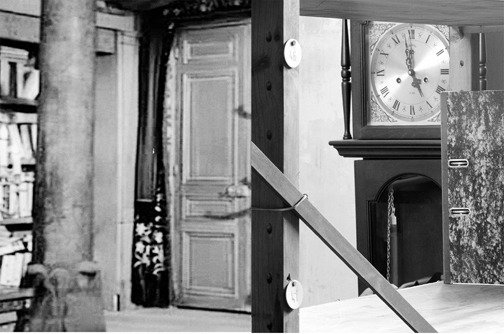 Fiction is warped, concealed and extended in Sauter’s photographic constructions. Memory serves as an entry point to elicit the faint echo of familiarity. Re-photographed film stills, captured on her television screen, merge with photographs shot in and around Sauter’s home and studio. Film stills faintly drift from their source once merged with staged photographs of domestic objects and interiors. These scenes exude suspense, casting concealment as a platform for suggestion.
When selecting film stills Sauter eschews iconic scenes in favor of anonymous segues, passages both temporal and architectural. These stages are laden with suspense; allowing absence to trigger imagined implications, leaving outcomes to be resolved by the viewer. When actors are present they are typically relegated to the background, backs turned to the camera to position the viewer as witness or voyeur. Three novels inspired and informed the exhibit, The Piano Teacher by Elfriede Jelinek, James Ellroy’s Black Dhalia, and The Trial by Franz Kafka, all of which were later adapted for film. The evolution from written word to projected image is alluded to in a number of the Black Dhalia works, which impart fragmented subtitles. As a group this suite of images suggest a sort of concrete poetry, a fissure between image and text that grants further free association. Perhaps Sauter’s compositions are more akin to the sensation of reading fiction than witnessing it upon a screen. Like reading her photographs are activated by the participant’s imagination, enabling the static to become animated, the resolution just pages away.

Martina Sauter was born in Constance, Germany in 1974. From 2000 through 2006 she attended Kunstakademie Düsseldorf where she studied under Thomas Ruff and graduated as one of his master students. Recent exhibits include Shapely Shadows and a New Apartment, AMBACH & RICE, Seattle, WA, Martina Sauter, Marion Scharmann, Cologne, DE Neues Rheinland. Die postironische Generation, Museum Morsbroich, Leverkusen, DE, and Manuel Graf / Martina Sauter, Kunststiftung Baden Württemberg, Stuttgart, DE. Her work has bee exhibited at institutions that include The Aperture Foundation, New York, Foam Fotografiemuseum, Amsterdam and Ludwig Forum in Aachen. Sauter received both the Thieme Art Award and the Young Artists on the Road Award in 2006. She currently resides in Düsseldorf, Germany.