In 'Pavilion for Revolutionary Free Speech' by Thomas Kilpper, originally created for the Danish Pavilion in the 2011 Venice Biennale, the artist carved 33 portraits including images of leading figures from Italy, Denmark and other countries. Painting the Weights, solo exhibition by Christina Mackie, consists of an installation that features such diverse elements as watercolours, photographs and ceramics, as well as found materials that range from mineral specimens to plastic beer crates. 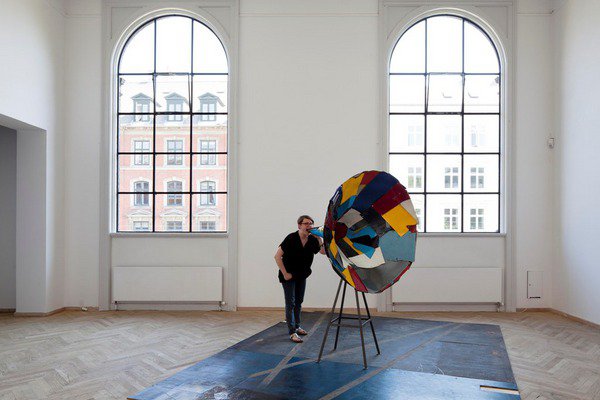 This summer Charlottenborg presents a major installation by the German artist Thomas Kilpper, entitled Pavilion for Revolutionary Free Speech. The work was originally created for the Danish Pavilion in the 2011 Venice Biennale, where it took the form of a raised wooden platform attached to the pavilion. Into the wooden floor of this structure the artist carved 33 portraits including images of leading figures – in politics, business, church and media – from Italy, Denmark and other countries. All of them are people who Kilpper believes have been directly or indirectly responsible for promoting censorship, social exclusion or intolerance.

The portraits include personalities from our own day including internationally famous figures such as Silvio Berlusconi and Pope Benedict XVI. The Danish personalities portrayed were: Pia Kjærsgaard, the leader of the Danish People’s Party (DPP); Anders Fogh Rasmussen, formerly leader of the Liberal Party, who while Prime Minister relied on the DPP for support; and Flemming Rose, the journalist and former culture editor of the Danish newspaper Jyllands-Posten, which commissioned and published the controversial Mohammad Cartoons in 2006.

The work was created for the group show Speech Matters curated by Katerina Gregos, which included eighteen artists from ten countries and was exhibited in the Danish Pavilion in Venice between June and November 2011. The exhibition explored the subject of free speech and Kilpper’s work constituted an ’alternative’ space next to the main pavilion. Kilpper’s Pavilion for Revolutionary Free Speech included a ‘Speakers’ Corner’ which featured talks by speakers invited by the artist, and from which members of the public could address the Biennale through an outsized megaphone.

When Speech Matters opened it was criticised in the Danish press by a number of politicians and commentators, who objected that the exhibition did not include enough Danish artists, or that public money was being used to commission foreign artists to represent Denmark, or that the public was being invited to trample on the faces of Kjærsgaard, Rasmussen and Rose. Other commentators defended the exhibition, while Kilpper pointed out that visitors did not have to step on the portraits, and that even if they did then it was not his intention that this should be an act of disrespect. Charlottenborg is now offering people who were not able to be in Venice the opportunity to see Kilpper’s work for themselves.

The floor panels of Kilpper’s pavilion were designed to also function as woodcut printing blocks, and the artist has subsequently been using them to make a variety of prints: in both fabric and paper; and including single portraits (each over a metre wide) as well as larger banners. At Charlottenborg the exhibition will include the entire floor, an installation of prints and an 18 metre wide banner on the building’s facade. Related works are being shown this year at dispari&dispari project, Reggio Emilia (February – April), Kunsthalle Bergen (March – April) and Ludwig Forum, Aachen (June – September). However, Charlottenborg is the only venue where the complete floor will be exhibited.

Thomas Kilpper was born in 1956 in Stuttgart and lives and works in Berlin. He was trained at the Kunstakademie Düsseldorf and the Städelschule, Frankfurt am Main. His work has consistently investigated the relationship between history, politics and collective memory, often taking the form of large-scale site-specific installations and floor carvings. Kilpper has exhibited across Europe and America, with recent installations that include: State of Control, created in the former GDR State Security (‘Stasi’) HQ, Berlin (2009); and Anemonevej Surprises, created in a group of empty apartments in Nakskov, Denmark, for the Tumult festival (2010). Since 2006 Kilpper has also run the Berlin-based project space after the butcher.

Charlottenborg is proud to present the first exhibition in Scandinavia by the Canadian artist Christina Mackie. The exhibition, entitled Painting the Weights, consists of an extraordinary installation that features such diverse elements as watercolours, photographs and ceramics, as well as found materials that range from mineral specimens to plastic beer crates. The exhibition follows Mackie’s ongoing fascination with both human technologies and natural materials, and her exploration of the connections that run between people, societies and the natural world.

Mackie’s exhibition is conceived as a single installation in two main parts. In the first galleries a host of found and crafted objects is arranged on makeshift tables and shelves, reflecting the artist’s studio environment. This sequence follows a principle of repetition and morphosis that runs through Mackie’s work as a whole. For example, the various forms in the ink drawings hung in the first space are reflected in the image of a mushroom cloud, which in turn is echoed by the shape of a jellyfish. Moreover, two videos featured in the first room are repeated in the second, one displayed in 3D and one bounced off a mirror, thus playing out other possible dimensions of the work.

The second part of the exhibition, on display in the last gallery, is entitled Us, the Residents. It contains a calligraphy of steel bars, a structure that supports photographs depicting solitary figures looking at computer screens in high-rise apartment buildings. The images, in one of which the artist herself appears, allude to the virtual connections between apparently isolated individuals.

Raised in Canada, Mackie (1956) lives and works in London. Her recent solo exhibitions include Us, Victorian College of the Arts, Melbourne (2010); The Judges, Supportico Lopez, Berlin (2010); This That and The Other, Herald Street, London (2007) and Art Now Sculpture Court, Tate Britain (2007). Mackie won the Becks Futures Art Prize in 2005; she is a current recipient of a Paul Hamlyn Award – a three year production grant that the artist was awarded in 2010; and in 2011 she received an Oxford-Melbourne Fellowship, awarded by Arts Council England and The Ruskin School of Fine Art, Oxford University.

The exhibition is a collaboration with the Chisenhale Gallery, London, where it was shown earlier this year. It is supported by The Danish Arts Council’s Committee for International Visual Arts. The exhibition will be accompanied by a publication, available from June 2012, price 40 kr.