In 'Signs & Wonders' Stevenson presents two-part sculptures, each consists of a mock cockpit with a freestanding screen placed in front. 'In the Company of Others' Forsythe examines the threshold between visual arts and choreography. 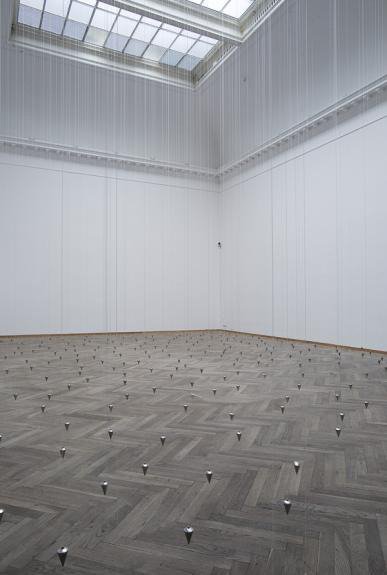 Kunsthal Charlottenborg kicks off its winter season with two exhibitions by highly acclaimed contemporary artists: A solo exhibition by the New Zealand artist Michael Stevenson, and a group exhibition curated around the practice of and including works by American choreographer and visual artist William Forsythe.

Six homebuilt flight simulators are placed in opposing pairs to create an approximate circle in the exhibition space; together, they form a curious mise-en-scène suggestive of an educational setting. As two-part sculptures, each consists of a mock cockpit with a freestanding screen placed in front. As a network, they form an interface capable of taking exhibition visitors on a series of silent, imaginary flights via physically constructed architecture and virtually constructed terrain. Using existing software, the flights shift the viewer to remote areas in the highlands of Papua New Guinea, where small aircraft play a vital role in navigating the difficult terrain. In this region, the aeroplane holds particular significance for both the local population and the Christian missionaries.

Connecting subjects such as aviation, religion, education, anthropology and globalisation, Signs & Wonders incites the viewer to consider the global distribution of ideas and beliefs. The exhibition is a continuation of Michael Stevenson's previous projects, whose characteristic experiential sculptural installations interlace anecdote, history writing and current affairs.

Signs & Wonders is curated by Henriette Bretton-Meyer and is produced in collaboration with Midway Contemporary Art in Minneapolis, where the exhibition will be presented in 2016.

William Forsythe
In the Company of Others

William Forsythe (b. 1949) is a major figure in the world of dance and choreography. He is internationally acclaimed for his work with Ballet Frankfurt, as well as the dance company Forsythe Company. Over the last decade, Forsythe has made his mark on the international art scene with art installations and choreographic objects, as well as film and video works. The exhibition William Forsythe: In the Company of Others examines the threshold between visual arts and choreography and presents works that circulate around the concept of perturbation.

The installation Nowhere and Everywhere at the Same Time is a large array of pendulums that should not be disturbed—but might be—while the piece Towards the Diagnostic Gaze asks the user to develop strategies to effectively reduce their body's involuntary, insuppressible micro-tremblings, questioning whether these uncontrollable movements are the result of their body's health or physical decline.

William Forsythe has exhibited internationally at prominent institutions such as Centre Pompidou in Paris,Tate Modern in London, the Venice Art Biennale and MMK Frankfurt, and has received numerous prices and awards.

The exhibition is curated by Mathias Kryger and is part of a three-year collaboration between Kunsthal Charlottenborg and Statens Scenekunstskole Efteruddannelsen.