The six invited artists are speaking to us about the past and memory as shifting elements, endowed with a variable, flexible identity and the blurry contours of truth and fiction, forgetting and remembering. The exhibition is part of the annual foreign curator in residence programme, welcoming Costanza Paissan, from Italy. 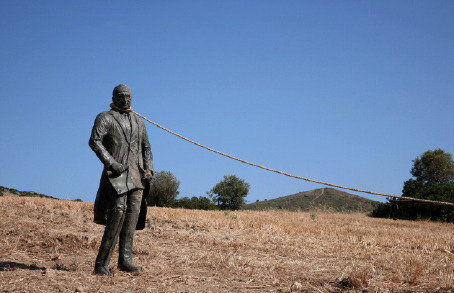 In his essay "Monuments", in Posthumous Papers of a Living Author (1936), Austrian writer Robert Musil addresses the question of how monuments are perceived, describing them as "invisible" and "impregnated with something that repels attention." The Invisible Monuments exhibition takes Musil's paradox of vision and attention as its starting point: monuments, while intended to attract the eye, are in fact imperceptible and "gaze-repellent" – refractory to both sight and understanding. They exist, but are not alive. They occupy a space both real and ideal, but are empty, transparent, indeterminate. At variance with our senses, they slip out of view. What does this imply for those great tributes to the past, those statues of heroes and those buildings dedicated to "memorable" moments? Where are the traces of those who have gone before us, our exemplars for the present and the pillars on which to build the future?

The works by the artists taking part in this exhibition challenge the notion of the monument: its function, value and meaning in today's world. This critical conjecturing has its roots in an artefact that has always been characterised by a powerful symbolic charge and conspicuous conceptual depth. The monument is not merely an artwork or a piece of architecture set in the public space: it is above all intended as an embodiment of a memory, a repository for personal or group recollection and a bearer of a message through time.

Recognition of the fragility of this relationship between form and substance is not solely a challenge to the monument's meaning: it also questions the value of its content.
Are history and memory still "visible"? If not, where have they gone? Are there still images, ideas, words and voices capable of filling the monument, of replenishing its emptied volume?

The works on show challenge and criticise the concept of the monument, pointing up its fragility and suggesting both new interpretations and hitherto untested interconnections with history and its traces. These artists are speaking to us about the past and memory as shifting elements, endowed with a variable, flexible identity and the blurry contours of truth and fiction, forgetting and remembering.

The traditionally affirmative function of the monument – celebration and commemoration of a past given material existence in the present and projected forward into the future – is supplanted here by new modalities based on questioning, doubt and critical scrutiny. What once was presence turns into absence; what once took the form of an affirmation turns into a question.

The pars destruens of the project nonetheless does not exclude an imaginatively constructive urge, a way of injecting life into images, shapes, spaces and ideas capable of generating a meditation on the past, a reflection on "today", a narrative looking to the future. The monument has not vanished: by taking on other forms it still shows through on a secret, hidden stage, clad in a new, magical robe woven from questions and doubts rather than truths taken for granted.
Costanza Paissan

Enveloppement (Envelopment), 2008 by Fayçal Baghriche is the first invisible presence on the path through the exhibition. On entering La Galerie's former middleclass 19th-century residence, the visitor is struck by a discreet vestige in the form of a rolled-up flag. Here something that usually proclaims the existence of institutions, seats of power or national monuments becomes the insignia of an unidentified country.

Then there are the evanescent presences whose ghostly silence seems to haunt the building's rooms. With their disquieting transparency the works of the duo goldiechiari compel the viewer's attention. Geneaologia di Damnatio Memoriae, Palermo, 1947-1992, (Genealogy of Damnatio Memoriae, Palermo, 1947-1992), 2011 is a large linen tablecloth embroidered white on white with a steadily advancing history of the Mafia in Italy: dates, places and names of the dead loom like scars on the identity of the country and its inhabitants. The photograph Untitled (2009) shows a celebration-style wreath, nameless and devoid of memories, a victim of a forgetting of oneself itself and the past.

Amnesia and suppression of memory are also to be found in Ante-Memorial, 2011 in which Eric Baudelaire speculates about still-secret letters containing instructions from British prime ministers to submarine captains as to the measures to be taken in the event of a nuclear attack. A written meditation on these invisible letters takes the form of an atypical monument, a memorial: instead of marble we have an exchange of correspondence; instead of a historical event, something that never happened.

Time slippage is also used by Iris Touliatou, whose The Fallen Reply, 2012 will be performed at the opening and will leave its mark on the exhibition space in the form of an enigmatic, all but invisible stage setting. The artist's point of departure is Bertolt Brecht's Lehrstücke, didactic musical plays based on actor-audience interplay. An empty podium, a rudimentary stage mechanism and a singer rehearsing a song written by the artist come together in an ephemeral monument composed of voices and notes – a memory in the process of taking shape.

Specially created for the exhibition, Tomaso De Luca's installation Sad Disco Stone Men, 2012 approaches the monument as cavity, as a void out of which images can be generated. A serie of slides in one of the rooms becomes a mechanism for producing images, visions, shapes. Entering a space closed off by heavy curtains, the visitor finds an atmosphere saturated with stories and lights: the artist turns sculptures into paintings and modernism into a private catalogue of signs. Monuments exist for only a few seconds, before the eye, distracted, looks elsewhere.

The monument in Stefanos Tsivopoulos's video installation is visible, but the process of becoming lost. Lost Monument, 2009 takes as its starting point the statue of U.S. President Harry S. Truman erected beside the Acropolis in Athens in the 1960s as a symbol of American interference in Greek politics. Archival films and photographs are shown together with a video narrating the sculpture's imaginary voyage. This lost object speaks to us of history, memory and the fiction inherent in the concept of the monument as a tool characterised by an impossible neutrality.

Costanza Paissan (1980) is a freelance curator based in Rome. As a curator at MACRO, Museum of Contemporary Art of Rome, she organised a number of exhibitions, publications and lectures, with an emphasis on modes of collaboration between artists and dialogue between curators. Holder of a PhD in History of Contemporary Art and a specialist of the period from the 1960s up to the present, she has written for cura. magazine, Alias and the Italian daily il manifesto. She also edits and translates books on contemporary Art for numerous international publishers including Phaidon, Electa and Marsilio.

The foreign curator residency at Noisy-le-Sec
Since 2006, La Galerie has been offering three-month residencies to curators from other countries with a view to organising an annual exhibition and providing contact with artists, art professionals and other venues on the Ile-de-France scene.

The residency programme enjoys the backing of the Ile-de-France Region Cultural Affairs Office (FRAC), part of the Ministry of Culture.

Press Preview, 5 – 6 pm in the presence of the artists and the curator
Opening Friday 25 May, 6–9:30pm
Performance by Iris Touliatou during the opening
Free shuttle bus leaving from Paris, 7pm